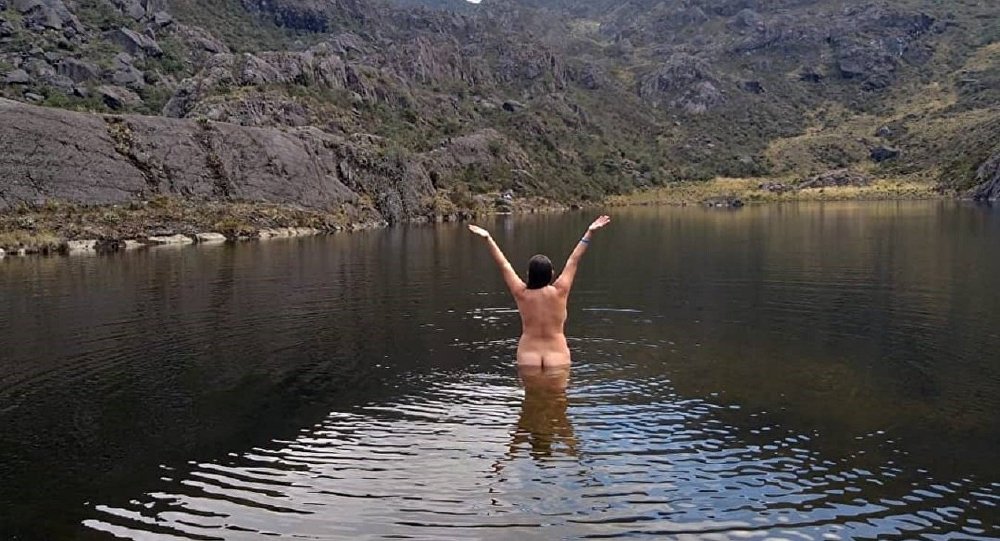 Environmentalists earlier addressed the Colombian authorities to restrict tourism in the pristine area of Paramo de San Turban, historically inhabited by ancient Mayan tribes. However, the woman who entered the waters of the “sacred” lagoon argued that just a few minutes there could hardly do any harm to the site.

A nudist travel blogger has met a barrage of severe criticism, and more specifically, accusations of desecrating a sacred lagoon after she shared a number of saucy pictures of herself posing in her birthday suit in the waters of the Paramo de San Turban nature reserve in Colombia.

Shots that were no less racy sported Tatiana Reyes standing beneath a waterfall, with her hands modestly placed on her private parts to keep them out of the viewers’ prying eyes.

Cesar Rodriguez, a local environmentalist in charge of taking care of the pristine wilderness, weighed in on the debate as soon as he saw the snapshots, claiming that she had disrespected the site and “only does it for the popularity”.

“We condemn the incident because these are sacred lands, for everyone from Santander to enjoy, and this shows a lack of respect for the natural world that we are trying to take care of”, he claimed.

Some other environmentalists quickly followed suit, arguing that merely entering the waters is not allowed, in order to effectively avoid contamination.

Those working to oversee the preservation of the stunning natural site, asked authorities to restrict the number of tourists visiting San Turban, which has been inhabited by Mayan communities of the Chuj ethnicity for centuries, out of environmental considerations, as tourists are frequently seen dumping rubbish into the lagoon.

Ms Reyes, who regularly posts racy updates on her Instagram page to the joy of her vast army of fans, said in her defence that she had been there several times, but went bathing for the first time.

“I do not think five or ten minutes inside the water of the lagoon could damage the ecosystem. It was a day with friends and we took a dip and that's all”, she argued.