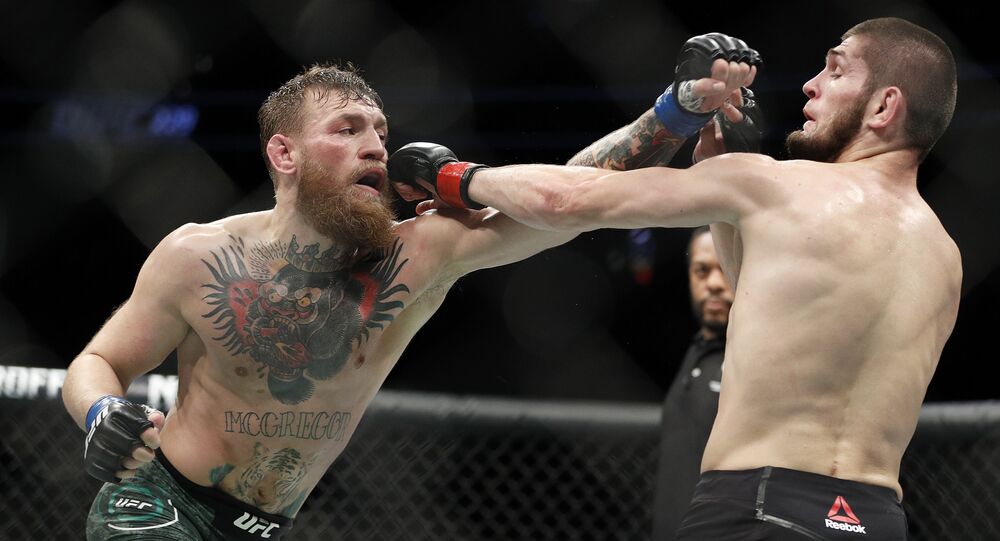 'The War is Over': Netizens Pessimistic About McGregor's Khabib Rematch Rant

Ever since Conor McGregor lost a lightweight champion title fight to Khabib Nurmagomedov, he has been mulling the idea of a rematch. It seems that even his announced retirement from mixed martial arts (MMA) hasn't cleared this idea from his mind.

In a recently released interview with famous motivational speaker Tony Robbins, Conor "The Notorious" McGregor revealed his vision of the last fight in the octagon against lightweight champion Khabib Nurmagomedov, as well as, on a subsequent melee.

In it, the Irish fighter claimed that although he lost the bout, the "final blow of the night" was his because he landed a heavy punch on one of Khabib's teammates in a fight that erupted after the end of the match.

"The final one was the original brother [a cousin of Khabib Nurmagomedov] who was on top of the cage. […] He threw a right hand. As he threw the right hand, I threw a left hand. Boom. There's an image, an aerial image, of the right hand just whipping by my face and my left hand just landing flush down the pipe. The final blow of the night. So, that's it. I win", McGregor said.

"The Notorious" then concluded that although the match didn't go "[his] way", the fight went, as he it wanted to go. He further added that the "war is not over" between him and Khabib, once again proclaiming his desire for a rematch with the Russian fighter.

"If this fight does not happen again, if it does not get reset, it's on them. They're running away. I'm here for the fight and here for the rematch", he said.

Netizens, however, were not so enthusiastic about the prospects for a rematch, suggesting that this page of the rivalry between the two fighters has been turned and that McGregor should get over it.

The war is over.

Pretty sure it's been over for awhile. Conor is a joke and got demolished.

Some pointed out that even if McGregor gets his rematch it doesn't mean it will end differently than the October 2018 fight.

The war may not be over but the fight will always end this way Conor. pic.twitter.com/5XQhPCHeVU

Hahaaa yes it is, Conor will never beat him. Should just look for another fight somewhere else 👍

One Twitterian suggested that the Irish MMA star had simply become obsessed with Khabib.

Many netizens said that instead of hearing McGregor talking to Tony Robbins they would like to see him fighting in the octagon with other Tonys.

A list of Tonys I want to see associated with Conor McGregor this year:

I’m tired of hearing anything about McGregor until he signs a fight. Don’t wake me up until then.

Conor McGregor announced his retirement from MMA in March 2019, but later in April mulled coming back to the octagon. His last fight took place in October 2018, when he lost to the UFC lightweight champion Khabib Nurmagomedov.

Following McGregor's submission, a melee erupted outside and inside octagon between the teammates of both fighters after Khabib attacked one of the Irishman's coaches. All the participants in the melee were later sanctioned by the Nevada State Athletic Commission with various fines and suspensions.

Khabib Nurmagomedov Hits Back at McGregor, Calling Him ‘Rapist’