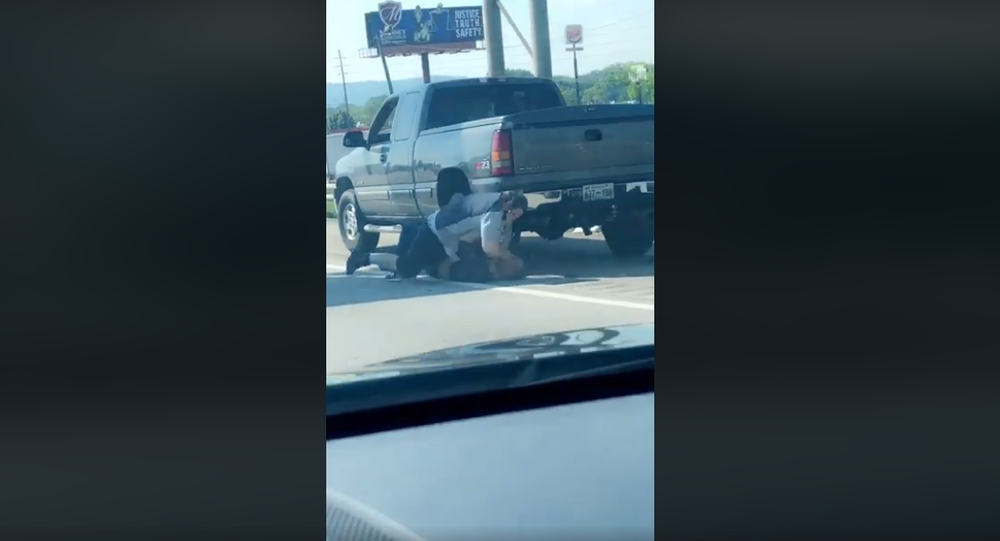 Two men in Chattanooga, Tennessee, were arrested after they were caught exchanging blows and rolling around just feet away from traffic on a major interstate on Friday.

Last week, Ashley McKenzie shared footage on social media of the two men, who have since been identified as Alexander Nicolou and Joseph Koehler, fighting on the ground, near traffic, on Interstate 24 in Tennessee.

"We were stopped in traffic on the ridge cut headed downtown. Guy [Koehler] got out of his jeep and walked up to the truck and punched him [Nicolou] through the open window and then walked back to his jeep. I have no idea why," McKenzie told Sputnik News Monday.

"We drove a little more and the jeep tried to get off the exit and the truck cut him off, and then they both got out and fought. Jeep guy [Koehler] definitely started it. In the end, they both went to jail, and the truck guy [Nicolou] got charged with a seatbelt violation. And the jeep guy [Koehler] got charged with assault. And rightfully so," McKenzie added.

The 25-second video shows one of the men lying on top of the other, throwing punch after punch, while the other attempts to wrestle away.

According to the Chattanooga Police Department, both men have been arrested as of Monday afternoon.

Nicolou was only charged with not wearing a seatbelt, while Koehler was initially charged with assault. However, Koehler's lawyer later told Sputnik that the charges against him have been dismissed and the record expunged.

This article has been amended after Mr Joseph Koehler's Lawyers contacted Sputnik, providing new details on the report.