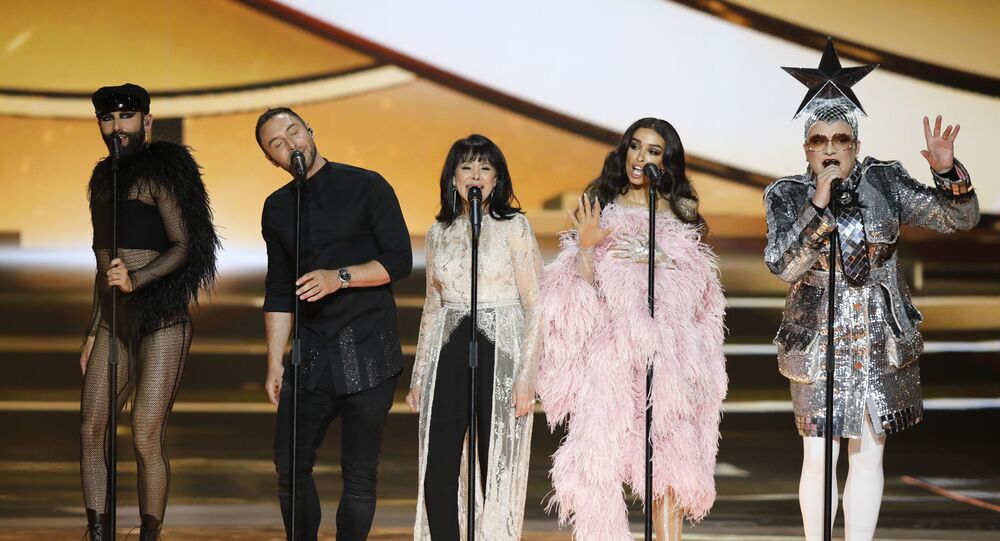 Europe's most popular song contest, held in Israel that won the previous year's competition, might not be as exciting as it used to be in the past, yet it pinpointed some interesting points about the contest itself.

Dutch contestant Duncan Laurence won with his song "Arcade”, marking the first win for the Netherlands since 1975. Yet there are other interesting things worth mentioning about the 64th edition of the song competition held in Tel Aviv this Saturday.

Not as Politically Neutral as It Seems

the rest of europe when iceland held up the flag of palestine #eurovision pic.twitter.com/od8dK64EdS

The #EUROVISION presenters when hatari whipped out those flags pic.twitter.com/KELyK3lepU

not only did hatari (iceland) do THAT, they also did THIS #eurovision pic.twitter.com/kqQ963mPiJ

​The scarves and flags were later taken away by staff members, as another video shows.

Madonna, who was one of the guest stars during the contest, also came under fire, as two of the singer’s dancers wore Israeli and Palestinian flags on their backs during her interval performance.

Madonna and Hatari are my winners of Eurovision 2019 #Eurovision pic.twitter.com/q4gKudTJVD

Even though opinions about the political statement made by her performance may vary, social media agreed on one thing: her vocals were terrible. The pop icon was pitchy and seemed to be off key during most of her performance, making users laugh.

Madonna and Quavo booking out of Tel Aviv after THAT performance: #Eurovision pic.twitter.com/u4ypokQTTH

When your Auntie is pissed at a wedding and she gets up to do her best #Madonna rendition on karaoke 😒 #awks #thatsnotmadonna #Eurovision pic.twitter.com/5zqfGwEd0w

Madonna: sings.
All of us: #Eurovision pic.twitter.com/6hp7PIfZ5d

​Ironically, while remaining popular in the US, her performance wasn’t on air in her own country as Logo TV channel, which had aired Eurovision in previous years, decided not to broadcast the contest in 2019.

Visuals Are Not Enough

The most impressively staged songs underperformed during the voting. Azerbaijan had dancing medical-looking robots projecting a laser-drawn heart onto Chingiz’s chest. Australia had Kate Miller-Heidke seemingly floating in space, making what users now describe one of the best memes of 2019. Russia’s Sergey Lazarev cleverly made you think he was surrounded by mirrors before the reflections began to do their own thing – yet he got only as high as third place in the competition.

Me after 5 shots at the bar #Eurovision #AUS pic.twitter.com/jb3epwKHSJ

my 3 last brain cells be like #Eurovision #Australia #Aus pic.twitter.com/cdnlDzwUgP

No Contestants as Good As Previous Winners

While it didn’t look that bad during the event, a segment which showed Eurovision stars of the past performing each other’s songs made the audience question whether Eurovision 2019 was good enough. Konchita Wurst, Måns Zelmerlöw and Eleni Foureira and a 2007 runner-up for Ukraine Verka Serduchka took the stage, singing together, which, as many netizens pointed out, was one of the most memorable events of the evening.

I hope these tracks land on streaming services. C'mon Eurovision, get those streams! pic.twitter.com/aVcyYSNVw2