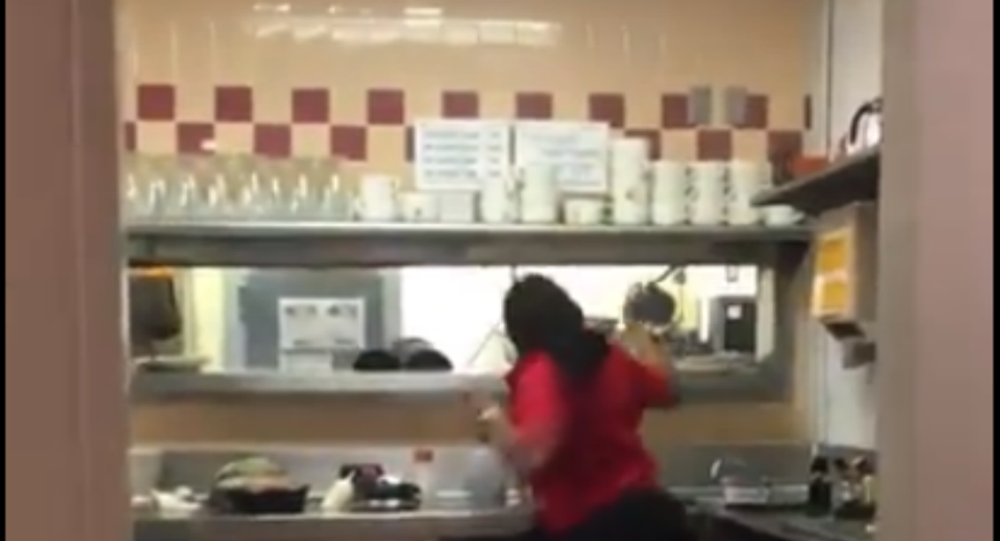 In a video uploaded to Facebook Saturday by customer Ashley Nicole Dodson Green, two employees can be heard yelling loudly in the kitchen at the IHOP. Shortly afterwards, the two women begin flinging pots and pans at each other, although only one of the offenders is clearly seen in the video. Other employees try to intervene as customers pause their meals to watch in shock. At one point, the fight appears to subside. However, according to officials, that is because the fracas was moved to the parking lot.

​"We was out celebrating my husband's birthday and we decided to go to ihop, once we got there it was really packed for Mother's Day weekend and seemed really unorganized and busy, but we decided to stay as everyone was packed around and we ended up waiting 30 mins or so on a table," Green said in a statement to WRCBtv.

"We heard people arguing in the back, then the next thing you know a big fight broke out. I started recording just thinking I would catch an argument," Green noted, also adding that a dish hit her daughter in the back of her head and that her daughter had to get checked out at the local emergency room.

According to an affidavit obtained by NewsChannel 9, a cook and server got into a heated altercation over an order. Zarcola Jones, a server at the restaurant, told cook Anitra Perkins to remake an order because it was wrong. The affidavit stated that Jones said, "B****, I didn't make it wrong." Perkins then told Jones not to speak to her that way, threatened to "whoop [her] a**," and then threw what was presumably a kitchen appliance at her. The fight continued to escalate with the two women throwing plates, pots and pans at each other. One customer was burned by hot grease from a pan that was flung in their direction, the affidavit reports.

Although this part was not caught on camera, Jones told police officers that Perkins said she had a gun. Jones then followed Perkins into the parking lot and attempted to run her over with her car multiple times. Witnesses told police that Jones was carrying a knife in her hand when she followed Perkins back into the parking lot. Jones' car was so damaged on the driver's side after the incident that she was unable to exit the vehicle from that side.

Perkins was not arrested at the time because she had a child with her, according to the affidavit. It is unclear whether she is currently in police custody. However, police confirmed that she will be charged with aggravated assault, battery, disorderly conduct and second degree criminal property damage. Jones was arrested shortly after the incident and charged with aggravated assault, battery and disorderly conduct.

"Our franchisees do not tolerate fighting of any kind between their team members and the outrageous behavior displayed by these two individuals goes completely against what the brand and our operators stand for," IHOP said in recent statement obtained by WRCBTv.

The Dalton Police Department did not immediately respond to Sputnik's request for additional information.