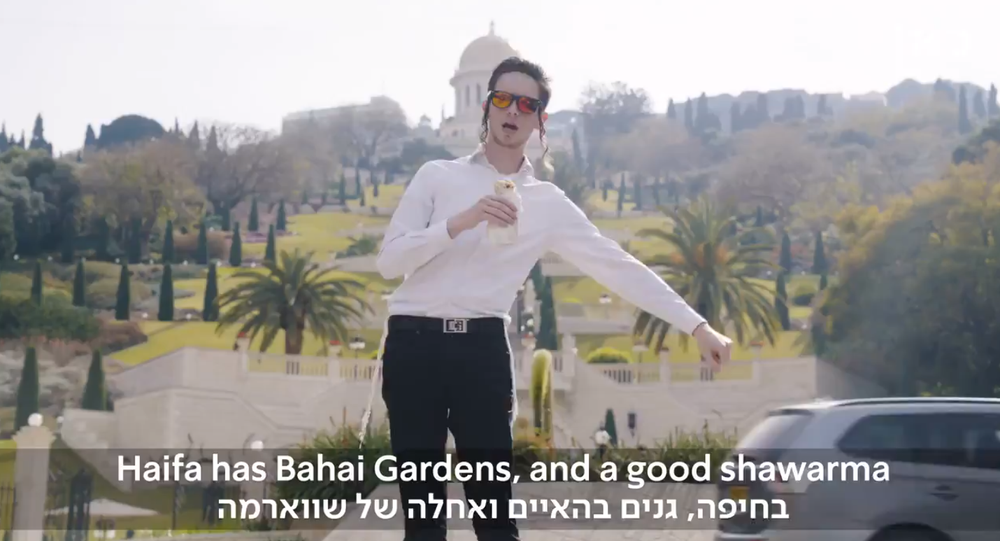 The semi-finals and finals of the 2019 Eurovision Song Contest is set to kick off in Tel Aviv on 14 May and will last until 18 May, when this year's winner will be selected.

A promotional video created by the Israeli Public Broadcasting Corporation (KAN) for its official Eurovision page has evoked amusement and belly laughs among some while sparking outrage from others after promising to give tourists in the country a "quick indoctrination" on what life there is really like.

The edgy song and dance routine in the video, featuring two tour guides meeting a pair of tourists from Europe at the airport, touches base on a plethora of stereotypes about Israel and its population, quipping that Israel is "much more than" a "land of war and occupation," mentioning the stereotype about "greedy" Jews, and commenting on the notion of life in the country being "bleak."

📺 This is the land of honey, honey!

Let Lucy and Elia take you in a musical journey throughout the most important parts of Israel. We promise you won't regret it! 👇👇👇 pic.twitter.com/djQlNXPoDe

The self-deprecating video, set to a positive upbeat tune, refers to Israel as a "land of milk and honey," adding that everything's too expensive, and that people consider one another "frenemies" who enjoy expresso coffee and a good shawarma.

Soon after appearing on KAN's official twitter page, the broadcaster was inundated with a flood of angry commentators from both sides of the ideological spectrum, with KAN seemingly predicting the coming storm by explaining that "the musical was satire and was meant to deal with stereotypes about Jews and Israel. YES, also by using self-deprecating humour like we love."

Just to be clear: the musical was satire and was meant to deal with stereotypes about Jews and Israel. YES, also by using self-deprecating humor like we love. We know our flaws, and we’re not ashamed to laugh at all of them.

The video and explanation didn't go over well among some, with Yair Netanyahu, the prime minister's son, calling it a "disgrace," and complaining that for a billion shekels, "all they managed to produce was an anti-Semitic video."

The Jewish Policy Centre, a pro-government think-tank, voiced its "disgust" with the stereotypes, saying the video had only 'given credence' to Israel's enemies.

We were disgusted with the stereotypes. If you say, "Yes (whatever nasty thing they say), but Israel is MORE than that," you give them credence. An open store on Shabbat? Who at Eurovision cares? Israel is great without stooping to this. Not fun. [Also, its beaches, not bitches]

THIS? This is the price Israel paid for a cease fire with Hamas?

This is cringeworthy beyond words. Not in the slightest funny. Just offensive, embarrassing! Whomever at @kaneurovision approved this, should be fired immediately! #Eurovision

People on the other side had their say as well, calling the video "antisemitism and misogyny set to music" or accusing the creators of trying to brush Israeli policy toward Palestinians under the carpet.

Eurovision is shaping up to be a big flop, and this video isn’t going to save it. Antisemitism and misogyny set to music is a bad look, Israel. #BoycottEurovision2019@BDSmovement pic.twitter.com/HmdBJ4s4fr

The token Palestinian-Israeli, you should capitalize her name. And "Arab" should also be capitalized. pic.twitter.com/JxKB8hW4Yq

The video did find its defenders, however, with one user calling it "genius from beginning to end. Down to the small details" such as the male performer's "I [Heart] Iron Dome" t-shirt.

C'mon.
The whole thing is genius from beginning to end.
Down to the small details.
The dude is wearing an
"I ❤ IRON DOME" t-shirt.
Brilliant and totally Israeli.
Classic Israeli humor like Comedy Store, Eretz Nehederet, etc.
Laugh a little.
It's fun. pic.twitter.com/E7Dw5EJKSk

Have none of you snowflakes heard of satire? Lighten up and lean in to the stereotypes while celebrating the beautiful complexities of Israel. It is not that hard and you might find it therapeutic.

I'm French and I like your special kind of humour. And I want to test your chawarma and your expresso as well 😉 Thank you very much for this funny musical moment! 🇫🇷❤️🇮🇱

A few users complained about the translations, which they said were wrong, or the quality of the clip's technical aspects.

I'm an American-Israeli & native speaker of English. This is terrible. The translation of חופים is beaches, not bitches (an obscenity). And החיים כאן מורכבים means "life here is complicated," not "life is bleak," which is very…שלילי. not to mention the un-funny antisemitic joke pic.twitter.com/aU5AZ4OlM7

FIX THE CAMERA ANGLES WE DONT WANT THESE WIDE SHOTS

Eurovision, the popular European song contest, is traditionally held in the country that won the previous year's competition. Israel singer Netta Barzilai was last year's winner, giving her country the right to host the competition. This is the third time Israel will be hosting the event after Jerusalem hosted it in 1979 and 1999.