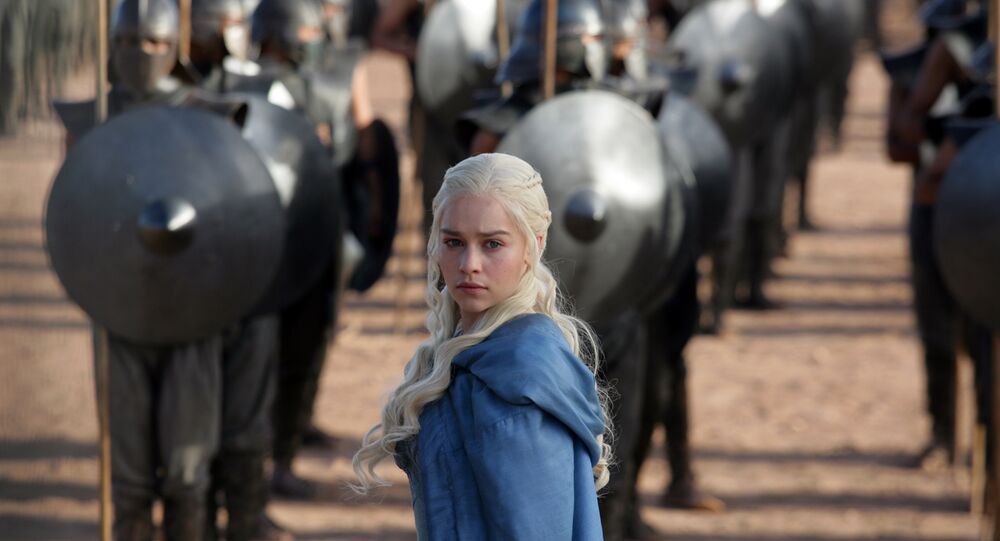 After the previous battle-heavy episode, Game of Thrones fans were prepared to see the devastating aftermath of the war against the dead, but they probably couldn’t expect that Episode 4 would bring so much drama to Westeros.

Sunday night’s episode of Game of Thrones’ last season was a real emotional rollercoaster. Things got off to a grim and sentimental start, with characters of the show facing the fallout of the Battle of Winterfell: Daenerys weeping over the corpse of Jorah Mormont and Sansa silently slipping a wolf pin onto Theon Greyjoy’s body.

After Jon Snow gives a speech to honour the dead and survivors burn piles of corpses, they gather in Winterfell’s hall to celebrate the victory over the Night King, who’s hopefully gone for good.

Episode 4 was full of romantic – and broken hearted – vibes: the newly-minted Lord of Storm’s End Gendry Baratheon popped the question to Arya Stark, the hero of the battle. Even though her sophisticated answer has left Gendry and social media users in a lot of pain, netizens couldn’t resist posting spot-on memes and references to the previous seasons of HBO’s mega-hit:

gendry: be my wife be the lady of storm’s end
arya: seen ✔️

What you say to marriage pic.twitter.com/l3MFjkeueO

Arya, rejecting Gendry’s proposal: “You’ll be a wonderful lord. And any lady would be lucky to have you. But I’m not a lady. I never have been. That’s not me.”

Arya when Gendry asked her to be his wife… #GameOfThrones pic.twitter.com/NQuDb2xNq8

But their encounter was not as dramatic as what happened when Daenerys with her dragons and the Unsullied headed to King’s Landing: her second “child”, Rhaegal, was fatally shot down in the sky by Euron Greyjoy.

Everyone tonight after watching Missandei be executed in front of Grey Worm, rhaegal shot down, Varys conspire against Dany, Jon send Ghost away without saying goodbye, Jamie leave Brienne for Cersei, and Dany lose almost everything she has: pic.twitter.com/kTMeFeGRei

The hardest death this episode pour one out for🍺 #Rhaegal #GoT pic.twitter.com/iYk7aaRf4g

I want Euron Greyjoy to experience the most brutal death ever for killing off Rhaegal #GameofThrones #GOTS8E4 pic.twitter.com/ZwhXTy4BU7

And if Rhaegal’s tragic demise was not enough, Cersei Lannister’s people captured Missandei, once a slave who was liberated by Daenerys and became her most trusted confidante.

In the final moments of the episode, Cersei orders the Mountain to behead chained up Missandei, who shouts the word “Dracarys” right before she dies in front of Daenerys. Her last words may be a signal to the Dragon Queen to unleash fire upon her enemies and burn Cersei’s palace to the ground – even if it means killing thousands of innocent civilians along with it.

Missandei's last word was "Dracarys" which marked the beginning of Dany's path as breaker of chains when she burnt the slavers of Astapor.

That word meant freedom for Missandei and the Unsullied. It meant hell for tyrants.

The fight for freedom is not over yet. #GameOfThrones pic.twitter.com/iYK6RBj897

I will never forgive the writers for making Missandei die in chains. SHE DESERVED BETTER#GameofThrones pic.twitter.com/sHvPj7OJIa

My dumbass really thought Drogon was gonna come save missandei because she said dracarys- #GameOfThrones pic.twitter.com/cxofdqXpNJ

Seeing the death of Rhaegal and Missandei might have sent Daenerys into a destructive spiral of grief that may bring us to a major plot twist in which she turns into her father known as the mad king.

Social media users are pinning hopes on the “mad queen” theory and have even noticed that Daenerys seemingly has green eyes, which has prompted new speculation that Melisandre’s prophecy to Arya (“Brown eyes, blue eyes, green eyes. Eyes you’ll shut forever”) was actually about Dany, not Cersei.

She lost Jorah.
She lost the Dothraki.
She lost Rhaegal.
She lost Viserion.
She lost Missandei.
She lost her claim to the throne.
She's losing Jon.
The Mad Queen is awaken.#GameofThrones pic.twitter.com/8vtldG3KGc

Daenerys also has green eyes; maybe Arya gets to kill her and not Cersei when she turns into the Mad Queen. #GOTS8E4 #got pic.twitter.com/AqXvD39v4B

Guys do you realize Daenerys has green eyes….what if these are the eyes Arya will shut, not Cersei’s cause I strongly believe Cersei will me Killed by Jamie #GameOfThrones #Cersei #Daenerys #Arya pic.twitter.com/I1dLE179BP

Does anyone else feel like the close ups of Daenerys in this episode were designed to remind us that Dany has Green eyes? ‘Brown eyes, Green eyes, Blue eyes.’ Arya will stop the Kings Landing massacre, but which green eyed queen will she kill? #GamefThrones pic.twitter.com/BuSNfgc6D4

And we realise that Daenerys also has green eyes. pic.twitter.com/0CkC5ta8c5