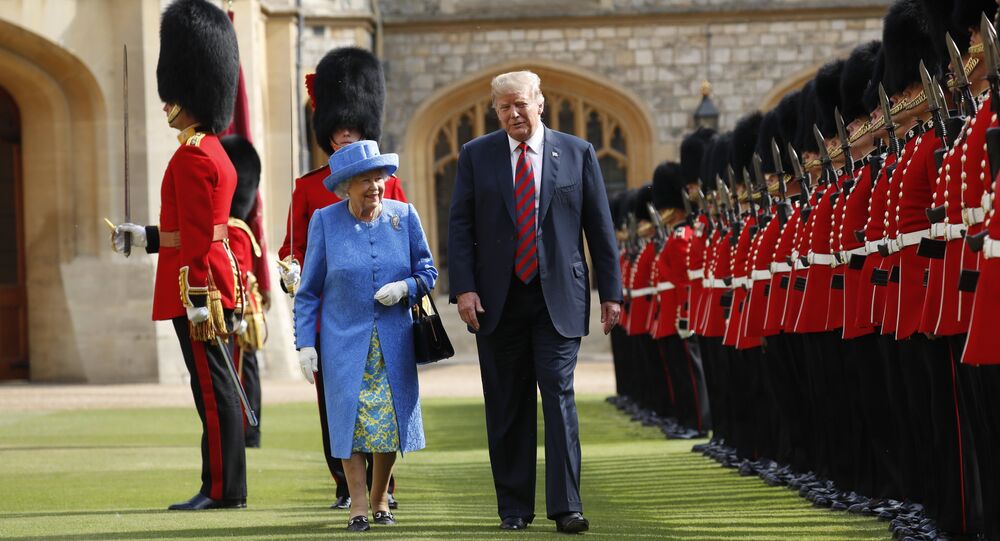 Donald Trump's two-day working visit to the UK last July was accompanied by massive protests in real live and on social media alike. Today, it's virtually just the same as before.

Buckingham Palace on Tuesday announced Donald and Melania Trump's state visit to the UK, which is scheduled to take place from 3 to 5 June.

A few details are known so far: the first couple is expected to meet with the Queen, who will reportedly host a banquet for 150 in Trump's honour. He will also have a meeting with Prime Minister Theresa May at 10 Downing Street.

Just like last year, the news immediately prompted an avalanche of reactions from commenters, and not all of them appear to be supportive of the upcoming visit.

Labour MP Clive Lewis hinted that it could be the perfect moment to remember the infamous "Trump blimp", a giant balloon that protesters floated above London the last time the POTUS arrived in the nation's capital.

Dear @realDonaldTrump so glad you've decided to pay us British mortals another visit. It *has* been a while since we last saw @TrumpBabyUK in action. 😉#TrumpUKvisit pic.twitter.com/jnJMwpPUb4

Last August, Trump's stroll ahead of the Queen was widely criticised on social media as a faux pas. The question is, will he fall into the same trap again?

#Trump #TrumpUKVisit
The Queen must be looking forward to a rematch. pic.twitter.com/01bb7hexLs

The White House is said to be preparing to announce that Donald Trump will make a state visit to the UK in June.

Fortunately, the Queen has a hat for every occasion. #ImpeachDonaldTrump pic.twitter.com/xTR93ZjRN7

…or at least find an appropriate driver for Donald Trump.

After the Palace announces Donald Trumps state visit, the Queen sorts out his lift from the airport #BuckinghamPalace #TrumpUKVisit #DonaldTrump pic.twitter.com/N4btH6hYQc

Just get Prince Phillip to pick him up from the airport. Job done👌#TrumpUKVisit pic.twitter.com/SieopfZTXl

Some appear willing to go to great lengths to keep the US President away from Albion. James Bond or a wall would do, jokers suggest.

Starting to think we should build a wall…https://t.co/Wpj5Urrglu

The album cover for Pink Floyd's ‘Wish You Were Here' also serves as a source of inspiration for those who don't want to see Trump in the UK.

US President Donald Trump will make a state visit to the UK in early June. pic.twitter.com/mWgziPOPgV