Shocking footage has emerged of an altercation between two Florida police officers and a 15-year-old black boy in which the officers punch him in the head several times and slam his head into the pavement after tackling him. An internal investigation has been launched, but a petition is gaining speed for the offending officers to be fired.

In a McDonald's parking lot in Florida's Broward County on Thursday afternoon, some kids reportedly gathering to watch an anticipated fight prompted restaurant staff to call the police. However, when the officers arrived, it was they who started throwing punches — at the kids.

15 yr old Black boy, Lucca picked up a cell phone that fell out of the pocket of a Black boy who was being arrested. In response @browardsheriff officers Christopher Krickovich & Greg LaCerra pepper sprayed, brutally beat, and arrested him.

​Footage of the incident soon appeared on social media, with the video above having been viewed 8.6 million times since Saturday; another video posted below has been viewed 2.55 million times.

Here’s another angle that shows @browardsheriff’s deputy pepper spraying unarmed Black boy, Lucca, who posed no threat. He then slammed his head into the concrete, arrested him & charged him with ASSAULTING the cops. 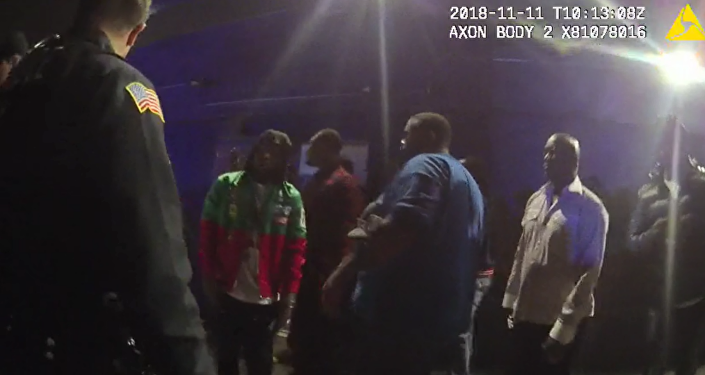 Screenshot/Cook County Sheriff
US Police Release Footage of Security Guard's Shooting Death By Officer (VIDEOS)
​In the footage, one boy in blue can be seen lying on the ground as he is placed under arrest by an officer. As this transpires, a second officer can be seen walking behind them, shoving one boy away and then grabbing and shoving the head of another in a red tank top, who has bent over to grab something. The boy in red stands up and looks the officer in the eye. The officer immediately peppers sprays the boy. As the child reels back from the shock of the spray, the officer grabs him by the scruff of his neck and slams him onto the pavement. From another angle, one can see two officers leap on top of him; one tries to cuff one of his arms as the other grabs the boy's neck and slams his forehead into the pavement repeatedly. As the boy in red tries to protect his head by putting his arm between it and the ground, the officer atop him punches him in the head. This causes the boy to pull his arm away, and his struggle ceases at that point.

Subsequent footage at the end of the arrest shows him sitting upright, drooling blood.

Delucca moved his arm during the unlawful detainment because he was trying to PROTECT his face from further injury. When your face is getting smashed into concrete you instinctively try to protect it. This is why they charged him with resisting a police officer. #Justiceforlucca pic.twitter.com/PybRlwhHz3

​While the arrest warrant affidavit filed Thursday offers more information, some of its claims are also called into question by the video evidence.

According to the court filing, Deputy Christopher Krickovich and his partner Sgt. Greg LaCerra responded to a call from a McDonald's in Tamarac around 3 p.m. Thursday. Krickovich wrote that the parking lot was a popular gathering spot for after-school fights by students at the nearby high school and that one had happened the previous day, after which at least one student was given a notice not to trespass.

Krickovich wrote that while the officers arrived after the fight ended, they nonetheless set out to disperse the crowd, and in the process reportedly spotted the student they'd given the notice to the previous day. The officers took him into custody.

"While I was dealing with the male on the ground, I observed his phone slide to the right of me and then behind me. I observed a teen wearing a red tank top reach down and attempt to grab the male student's phone," Krickovich wrote.

The officer writes that he ordered the boy in red to stay back, but that the boy "took an aggressive stance" toward the officer and "bladed his body and began clenching his fists."

That was when LaCerra pepper-sprayed him, claiming he feared for his safety. According to the filing, there were roughly 200 students around him, but in the video, no such dense crowd can be seen; perhaps only a few dozen were nearby.

"Again, the three of us were outnumbered by a large group of students who were yelling threats and surrounding us," Krickovich wrote. "I had to act quickly fearing I would get struck or have a student potentially grab weapons off of my belt or vest."

During the scuffle, it was Krickovich who wound up on top of the boy in red, and who admits to punching him in the head, which he calls "a distractionary technique" to ease the boy's arrest.

The 15-year-old appeared in court Friday, where he was charged with assault, resisting arrest and trespassing, local CBS affiliate WFOR reported.

Now a petition is circulating online, titled "Fire the Broward County Police Officers That Used Unreasonable Excessive Force on Delucca," whom it identifies as the boy in red (his name is redacted in the released affidavit). So far it's accumulated over 43,000 signatures and sparked a hashtag, #JusticeForLucca. 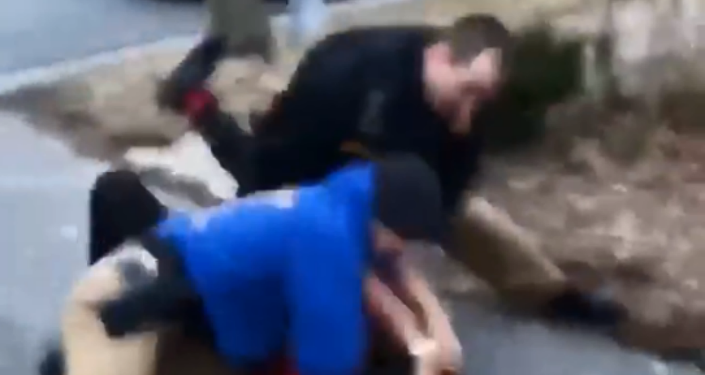 While the officers "were acting under color of State and Federal law as an employee of the Broward County Sheriff's Office, they subjected Delucca to the deprivation of rights and privileges including the constitutional right to not be deprived of his liberty and the constitutional right to be free from the use of excessive force against his person," the petition says.

"Since the force utilized by the Officers against Delucca was excessive, unreasonable, and in violation of Federal and State laws, as well as accepted police practices within the United States, the officers should be fired and charged with battery. Please stand up for what is right and sign this petition. FREE Delucca and drop all charges against him."

"I wanted to assure you that this incident is being conducted under a thorough investigation," Broward County Sheriff Gregory Tony said in a video statement Friday. "We will look at this as a fact finding measure to ensure that we hold folks accountable."

"The officer who jumped on the student, punched the student and banged his head to the ground should be fired immediately. There is no excuse for a law enforcement officer to harm a teenager who was on the ground and who gave no resistance," Broward County Mayor Mark Bogen said in a Friday statement. "If the deputy wanted to arrest the student, he could have easily done so without throwing him to the ground. I hope the appropriate authorities investigate this conduct and take the appropriate action."

Krickovich has been ordered to surrender his gun and badge while the force's Division of Internal Affairs investigates the incident.

WATCH: Bulgarian Police Mistakenly Pepper-Spray Themselves Instead of Protesters