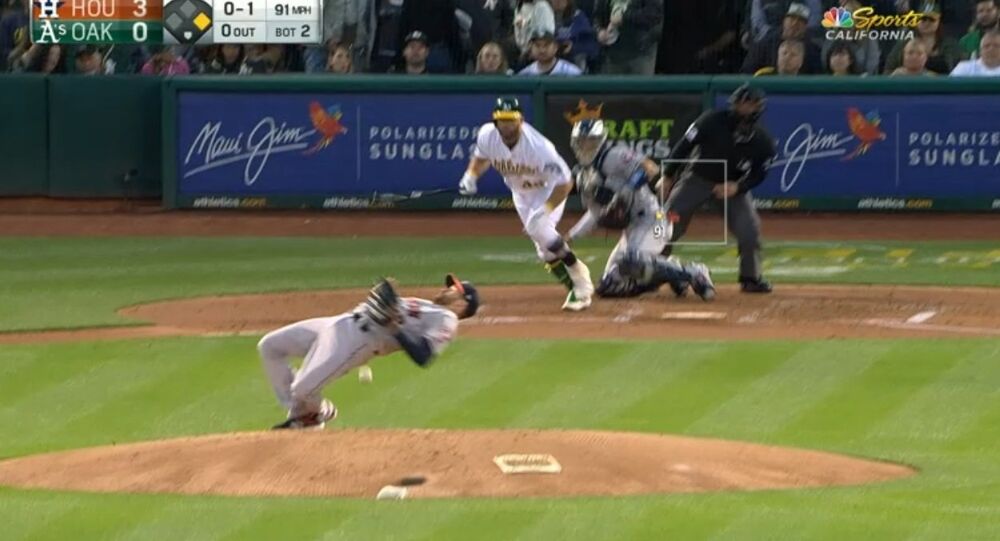 ‘He Is the One’: Houston Astros Pitcher Pulls Out Matrix-like Dodge

Footage of Houston Astros’ pitcher Collin McHugh pulling off a Matrix-like move to dodge a line drive went viral across the net.

McHugh was facing the Oakland Athletics’ Kendrys Morales in the second inning of Tuesday's 9-1 away victory for the Astros when Morales scorched a line drive back at the mound. The Astros pitcher twisted back to avoid the ball, which flew millimetres from his face but only grazed his ring finger — “probably the best place it could have hit me,” he said after the game.

No, Neo. I'm trying to tell you that when you're ready, you won't have to.#TakeItBack pic.twitter.com/JFOAcFYuCP

“I saw the ball come off the bat but I was in a weird fielding position so I kind of like whiffed on it with my glove and then by that time I was just already falling over so it was like, I just kept going and the ball just kept tracking,” McHugh said after the game, cited by the Daily Mail.

The dodge instantly prompted comparisons with Keanu Reeves' character Neo from The Matrix, and the movie's famous bullet-dodging special effects. According to MLB.com, even home plate umpire Bob Guccione made the comparison as soon as he saw the play, shouting at McHugh “That was 'The Matrix’!'”

Twitter eas quick to respond with Matrix memes and genuine support for McHugh.

'It Really Can Save Lives': London Police Hit Back at Criticism of Gang Matrix