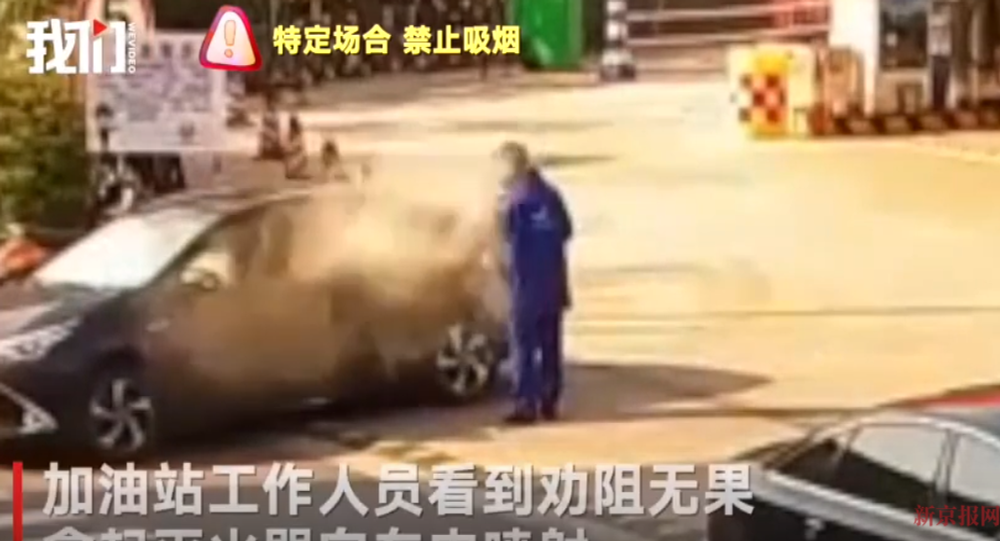 A video clip shared on YouTube by Chinese Central Television (CCTV) shows a man being sprayed directly in the face with a fire extinguisher for smoking at a gas station in the country.

The footage was taken on March 24 at a gas station in Hangzhou, the capital of China's Zhejiang province.

​According to Youth.cn, Hangzhou citizen Lao Li had just finished refueling his vehicle at the gas station. As Lao drives away, he pauses near the gas station and lights up a cigarette. Gas station employee Qian Jiaqi approaches him and asks Lao to stop smoking multiple times, as smoking at a gas station is dangerous because sparks from the cigarette can move toward highly the flammable petrol and cause fires.

Lao refuses to put out his cigarette, and the video footage then shows Qian spraying Lao in the face with a fire extinguisher.

In a fit of rage, Lao exits the vehicle and shoves Qian, only to find himself sprayed by the fire extinguisher again. A couple of other people are then seen intervening between the two men, presumably in an effort to deescalate the situation.

"Smoking is banned in the gas station. It's common sense. I tried to stop him the moment I saw him lighting up a cigarette," Qian told Qianjiang Evening News.

"But he had a horrible attitude. He refused to put it out," Qian said.
According to Youth.cn, Lao and Qian were both taken to a local police station, where Lao was reportedly detained for three days for smoking at the gas station.

Why Smoking at the Gas Station is a Very Bad Idea