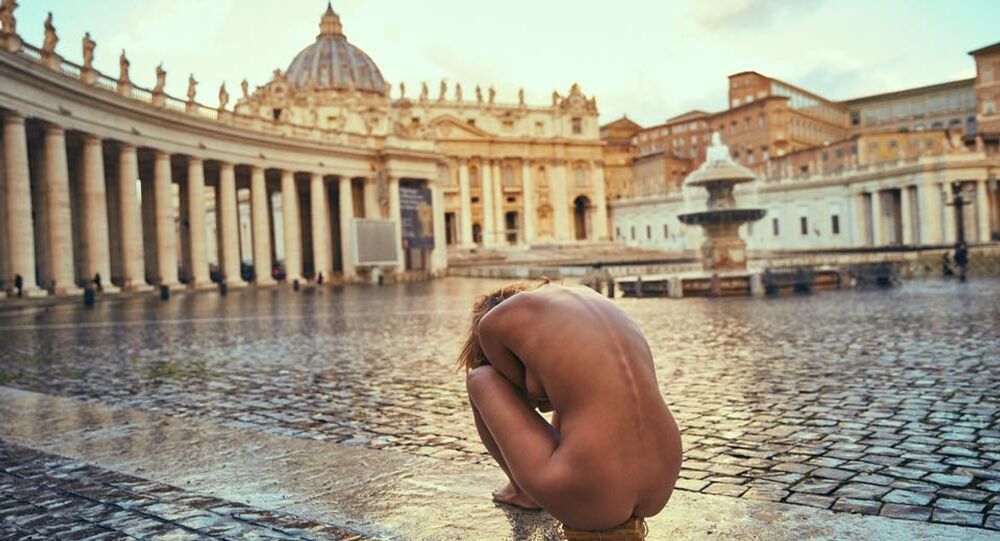 A mammoth fire at Notre Dame Cathedral in Paris, one of the most iconic and cherished monuments in France, has left the entire nation mourning, but for one person, this is apparently only the beginning of a new era.

Marisa Papen, the scandalous Playboy model who made a name for herself making nude appearances in various places of worship, has turned to social media to celebrate the Notre Dame fire.

"Churches are burning… A new era is gonna come!" she wrote on Facebook on Monday.

The 26-year-old Belgian went on to herald the coming of a "third testament" and added: "I'm conveying my compassion for everyone who has been a victim of the church. Sexually/mentally/physically…"

Reactions to this statement were mixed; while some praised Marisa as their role model, others were more critical of her language.

"I like what you do and admire your free spirit, but maybe it wasn't the time to make a point as we don't yet know if anyone has been injured or lost their life," said one commenter.

"I am not a churchgoer, Marisa," wrote a user, "but your endorsement of destruction of property is unacceptable! Besides, not every church individual is responsible for the abuse that you mentioned!"

Another inquired: "Have you considered seeking psychiatric help, Marisa?"

Marisa Papen earlier said that she feels negative about religious institutions due to their perceived greediness. "For me, the biggest problem is with the institutions built around religion," she said last year. They are driven by money and are soulless."

She has sparked controversy on multiple occasions, in each case she pulled off a religious-themed 18+ stunt. The model has become an inspiration for naked breastfeeding Virgin Mary sculptures, posed for a naked photoshoot in the Vatican, flashed her private parts while donning a burqa in a former mosque in Istanbul, and spent 24 hours in jail for another nude shoot at Egypt's Karnak temple complex.

The 856-year-old Gothic-style cathedral caught fire on Monday evening, toppling the spire and destroying the roof structure. Officials have explained that the blaze probably happened by accident during restoration works.

President Emmanuel Macron described the incident as a "terrible tragedy" and vowed to rebuild the iconic church.

Heart of Paris Up in Flames: Notre Dame Cathedral Burned to Ashes