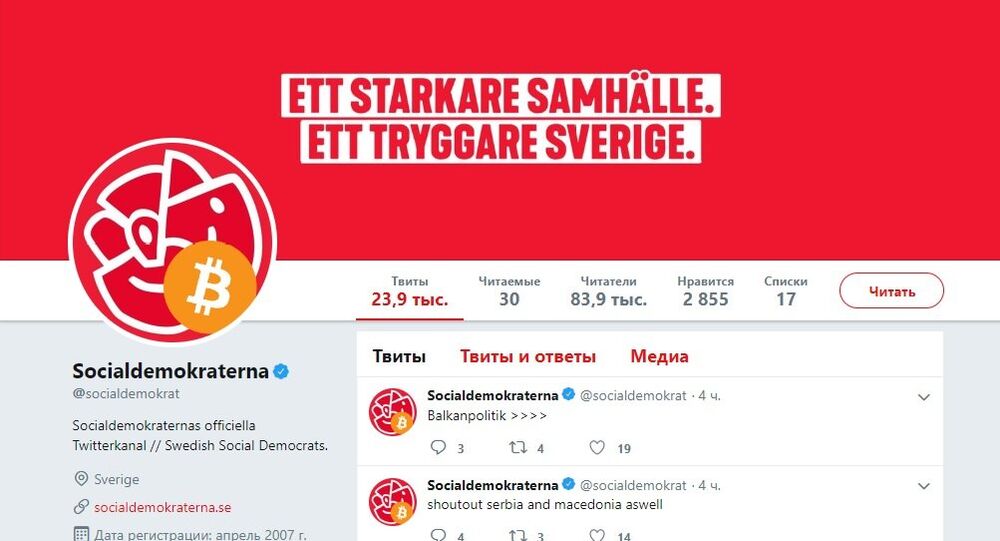 Eyebrows were raised when Sweden's ruling party, the Social Democrats, lost control over its Twitter account, which has been spewing out attention-grabbing nonsense, including shout-outs to their nemesis, the Sweden Democrats. Swedish Prime Minister Stefan Löfven will resign and the Swedish krona will be replaced by bitcoin, the hijackers contend.

The Social Democrats have admitted that their account, with over 80,000 subscribers, has been hijacked and said they are currently working on a solution, national broadcaster SVT reported.

Strange tweets began to appear on the Social Democrats' account at about 2 o'clock in the morning on Monday. Over the next several hours, over 20 tweets were sent out on an array of topics, including cannabis getting legalised and Prime Minister Stefan Löfven retiring.

A bitcoin mark also appeared on the Social Democrats' trademark rose to mark a transition away from the national currency.

"We have abolished the Swedish krona and replaced it with Bitcoin, time to buy!" the Twitter account said.

"We have now decided to abolish the Swedish Air Force and instead invest in immigration and those in need!" the hijacked account elaborated in a tongue-in-cheek mockery of the left-leaning Social Democrats' politics.

"Now we're celebrating the peak number of rape victims by raising taxes and opening up the borders, Socialism FTW!" the pranksters exclaimed.

The Twitter account also informed that cannabis now was legal and that Prime Minister Stefan Löfven, unceremoniously called 'Steffe', had quit his post to join the military as a lieutenant. A photograph of Löfven driving a tank was added.

"Of course nothing we support, there are some really serious things out there," the Social Democrats' press communicator Åsa Söderén told SVT.

On Twitter, many were nonplussed by the change in tone from Sweden's largest party. However, others enjoyed the prank.

"Whoever did this deserves a medal", a user cheered.

"In other words, nothing has changed", another one sneered at the performance mocking the Social Democrats.

"At least this is the closest this account has been to the truth after it got started…", yet another user scoffed.

Another one suggested that the hijacking was staged to frame and ban "the world's most feared clique", the alt-right.

Founded in 1889, the Social Democratic Party is Sweden's oldest and largest political party. Having ruled the country for most of the 20th century, the Social Democrats polled a historic low in the 2018 general election, falling below 30 percent amid widespread criticism over allegedly eroding the country's welfare and being overzealous with immigration.