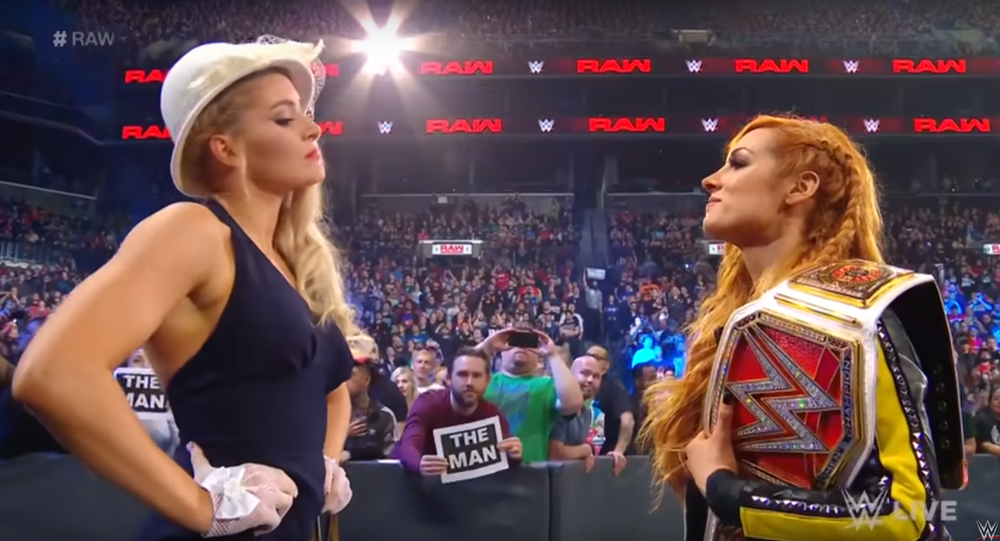 The ensuing scuffle, in which Lynch’s attacker managed to hold her own despite wearing heels, caught the eye of many social media users who started discussing the possibility of an emerging feud between the two wrestlers.

Becky Lynch’s Monday night triumph, in which she managed to prevail against Ronda Rousey and Charlotte Flair and secure both the WWE Raw and WWE SmackDown Women’s Championships for herself, ended with a shocking twist when she was suddenly confronted by Lacey Evans.

Just as Lynch finished her victory speech, Evans walked up to her and engaged her in a staring contest for a few brief moments and then suddenly punched The Man right in the face.

Looking stunned for seconds, Lynch quickly recovered and threw herself at Evans who already started strutting away, with Lacey managing to hold her own in the ensuing brawl despite wearing heels.

The ensuing scuffle, which was eventually broken up by staff, did not go unnoticed by the social media audience, prompting talk about a possible feud between the two wrestlers.

They made Lacey Evans a viable opponent for Becky Lynch. Strong segment. It’s up to her now to make the most of it because these opportunities don’t come around often. #WWE #Raw

The traditionalist woman vs the woman known as The Man, is a feud that makes sense. Conservative vs progressive.

Lacey Evans finally did something, but I think she’s going after the wrong person. The Man Becky Lynch will keep her in line. #rawaftermania

You realize that Becky got concussed, bleeding and still stood tall like the bad ass she is months ago right? Careful what you wish for Evans. When you play with #StraightFire you're going to get burned. They don't call @BeckyLynchWWE the #LassKicker or #TheMan for nothing. pic.twitter.com/zonJZ1fYrO