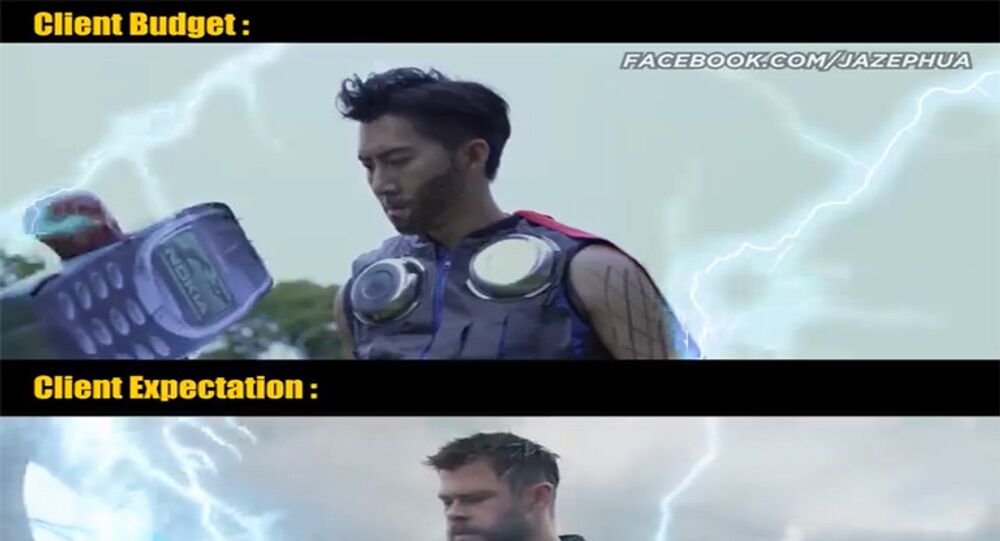 Jaze Phua, a Singaporean filmmaker, is gaining popularity for his hilarious frame-by-frame recreation of this spring’s much anticipated “Avengers: Endgame” movie.

Phua mainly used DIY (Do-It-Yourself) props for the parody trailer, including a cardboard cut-out in the shape of Tony Stark/Iron Man’s helmet, a water bottle (by the looks of it), and a huge Nokia 3310 made to appear like Thor’s Stormbreaker axe, while also putting on white towels for the costume of Odin, Thor’s father.

For some of the shots of the spaceships, like the Avengers’ Quinjet or the airship of the Guardians of the Galaxy, Phua used just his hands and pieces of paper.

Phua admitted that a fairly small amount of money was spent on the project, making the most out of the DIY-made props.

“We spend $2.70 on black whiteboard markers for our beard, $10 on Crispy Chicken Meal and other than transportation costs, it cost pretty much nothing but [a lot of] effort because we DIY-ed almost everything. Just trying to prove a point to some clients that you get for the price you pay sometimes,” the creator, who also played some of the roles in the trailer, told CLEO.

He also explained that he used the cameo of the Nokia 3310 in the trailer due to the phone’s indestructible nature.

Fans have already shown their appreciation for the parody, expressing their wish for an actual film done entirely with DIY-materials. “Did you do it? Yes What did it cost? Nothing,” another comment reads, referencing the final lines of the previous Avengers movie.

According to Phua, it took four days—five in total, including editing, to create this trailer, and much of the time was spent discussing how to get particular shots as they didn’t want to miss any of them.

The video got more than 26k views and 500 shares in the first couple of days, while the Instagram post with the parody trailer has almost 12k likes.

'The Empire Strips Back' at Star Wars Burlesque Parody