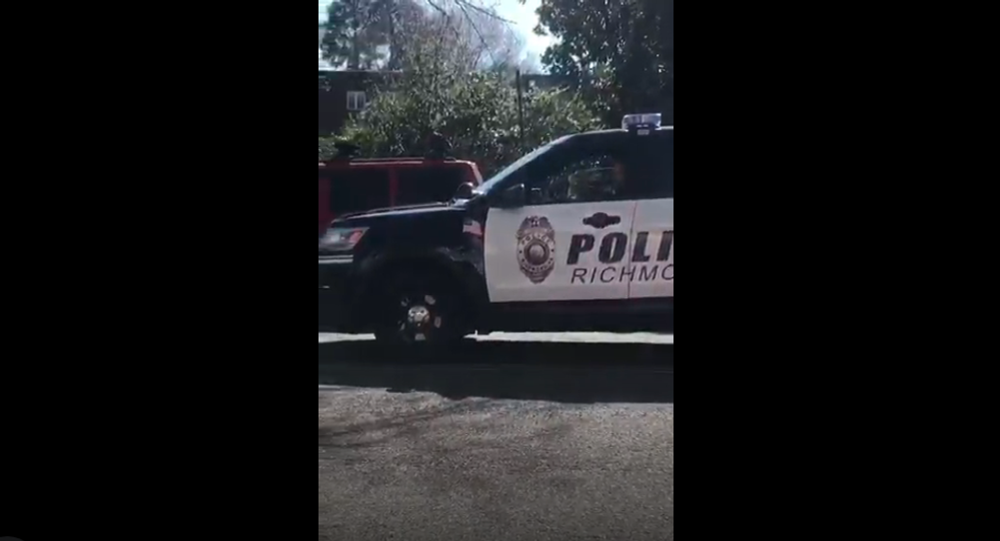 ‘Wait Until Your A**es Turn 18’: US Officer Threatens Schoolchildren (VIDEOS)

A Richmond, Virginia, police officer who threatened a group of black middle school students last week is currently being investigated by the police department.

Video footage of the interaction was shared on Facebook by Tenesha Calloway, the mother of one of the students involved in the incident. The officer, whose identity has not been revealed, heard someone say "f**k the police" while he was patrolling the neighborhood. As a result, the officer yells, "Wait until your a**es turn 18, then you're mine," from his patrol vehicle, directing his statement toward the group of students. However, according to students who were confronted, they were not even the ones who cursed at the officer in the first place.

"While waiting to walk to their after school program a Richmond City Police officer drove past my daughter and her classmates that were standing in front of Albert Hill Middle School, made a U turn and yelled out of his window ‘What did you say?'" Calloway wrote on Facebook.

"They told the officer they didn't say anything and he replied ‘Yes you did.' One of the young ladies said ‘No we didn't and if we did we have the right to speak.' He proceeds to tell the minors that ‘That's ok when you turn 18 your a** is mine.' I am disgusted and disappointed but not surprised that a white male officer would make a threat and use that tone or language towards a group of children. My child and her friends have to walk to their after school program and knowing that the police are making idle threats to them is unsettling. I want to know who this officer is and I demand an apology and some form of reprimand to this officer," Calloway added.

The video footage of the incident was recorded by student Cameron Hillard, whose mother, Keisha Curry, also commented on officer's behavior in a YouTube video published on March 31.

​In the video, Curry says that when her daughter first showed her the video, she acted in a perfunctory manner because of her experiences living in Richmond.

"Being that I was brought up and raised in Hillside Court and the Highland Park area, I found that officers acted like that on a regular basis," Curry said. However, after viewing the video again, she realized that it was disturbing.

"I don't feel he [the police officer] needs to lose his job," Curry told NBC News Tuesday. "He just shouldn't be patrolling the streets."

Calloway and Curry did not immediately respond to Sputnik's request for comment.

In a statement to NBC News, the Richmond Police Department confirmed that they are aware of the video.

"The Department takes these concerns very seriously," the spokesperson said in a comment to the news outlet. "The officer in the video is currently being investigated by the Internal Affairs Division." The Richmond Police Department did not immediately respond to Sputnik's request for comment.

"I trust that the Richmond Police Department will conduct a quick and thorough investigation and respond accordingly," Stoney said in a statement obtained by multiple news sources. "This behavior is unacceptable. It reinforces stereotypes of our communities that are hurtful and damages the relationship between our police department and the citizens they are charged to serve."