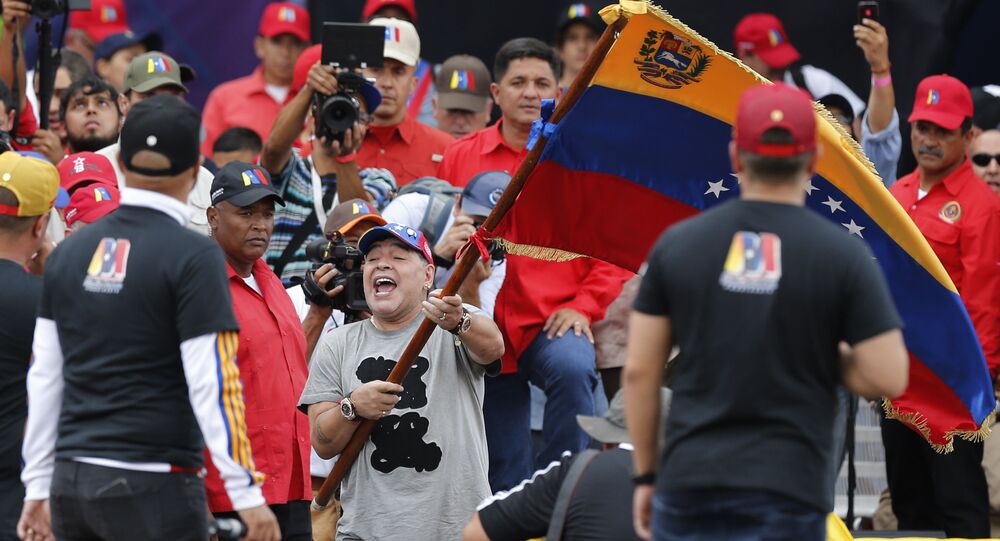 The retired attacking midfielder, who took the Argentinian national team to victory at the 1986 World Cup and is regarded by many fans as perhaps the greatest soccer player of all time, is a well-known supporter of Venezuelan President Nicolas Maduro and Venezuela's Bolivarian Revolution.

Diego 'The Golden Boy' Maradona has taken a brief timeout from his role as manager of Mexico's Dorados de Sinaloa football club to dedicate the team's Sunday night victory to his friend Nicolas Maduro and the Venezuelan people.

"I want to dedicate this victory to Nicolas Maduro and to all Venezuelans who are suffering," Maradona said, speaking to reporters after Sunday's game, in which the Dorados trounced Tampico Madero 3-2.

"The sheriffs of the world, who are those Yankees? Just because they have the biggest bombs in the world they think they are so much more advanced than us. No, they are not," Maradona stressed.

"We don't buy that 'chirolita' they have as president," the star added, referring to a famous 1970s Argentinian ventriloquist puppet bearing a strong resemblance to the appearance and mannerisms of US President Donald Trump.

© REUTERS / Carlos Jasso
'Losing Power': US Activist Suspects 'No One Showing Up' for Pro-Guaido Protests in Venezuela
Maradona's comments spread like wildfire online, with Twitter and Reddit users predictably dividing into camps regarding his message.

"Maradona commenting on international politics isn't something I knew I wanted," one user wrote. "Wtf I love Maradona now?" another chimed in. "You are great Maradona," a third added.

Others accused him of being "ignorant when it comes to politics," claiming that "Venezuelans have been through hell because of Chavez and Maduro," or accusing the legend of being an "old fool." Some attempted to disarm the situation, saying it was Maradona's right "to choose who to support and to have freedom of expression."

Diego Maradona is well-known supporter of Venezuelan President Nicolas Maduro. Last year, following a drone attack against Maduro and other government officials, the football star said that the attempt on the Venezuelan leader's life was "an attempt against the nation."

© AP Photo / Marcelo Garcia
Trump's Rep Reveals How US Wants Maduro's Rule in Venezuela to End
Venezuela's political crisis came to a head in late January, when opposition leader Juan Guaido declared himself the country's 'interim president' and was immediately recognised by the US and many of its allies. Caracas slammed the move as an attempted coup d'état. Russia, China, Cuba, Bolivia, Turkey and many other countries denounced takeover attempt and urged outside powers not to meddle in Venezuela's affairs.

On Sunday, Russian Foreign Minister Sergei Lavrov dismissed recent US threats to make Moscow 'pay a price' for its military assistance to Caracas, stressing that Russian support, including assistance with the maintenance of military equipment, was being provided on an "absolutely legitimate and legal basis" in accordance with Venezuelan law and bilateral agreements.