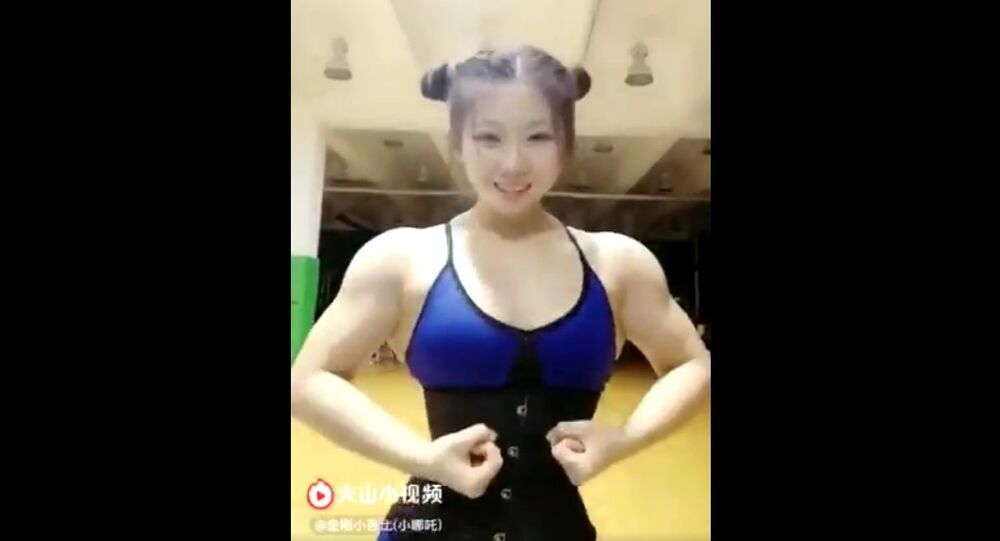 A 21-year-old bodybuilder from China has shot to international fame on social media, sharing her gym routine online. Despite her growing online fandom, the petite fitness fan also has to deal with bullies and haters, criticising her outstanding physique.

Student Cheng Lu has gained over 300,000 followers and millions of views on Chinese video platforms, such as Kuaishou and Douyin, live-streaming her training sessions and sharing photos from the gym. The petite bodybuilder, who can squat lift twice her body weight, or 120 kilograms, has been dubbed “King Kong Barbie”, the Daily Mail reports, as apart from the extremely toned muscles she also has an anime-like doll face.

​The 21-year-old Cheng told the outlet that her life changed after a friend of hers took the young woman to watch a bodybuilding competition.

“I thought the women in the competition were very beautiful. They displayed a different sense of beauty and looked very healthy. That game left a deep impression on me”, the woman who used to be a shy schoolgirl revealed.

According to Cheng, who majored in bodybuilding after entering college, said that Chinese people traditionally think that women “should look weak to be beautiful”, but questioned this stance, asking “who says we can't do things men can do, just like Mulan in ancient times”.

According to the British media, she has been mocked online with some reportedly saying that they can't understand why a woman like her wants to be muscular and suggested that she would not find a husband.

“But I think different people are exposed to different social networks, therefore we all have a different sense of beauty and value. I hope to achieve a healthy body and encourage people around me to do so too”, the woman said, revealing that her ambition is to compete in more pro-bodybuilder contests.

Another of her goals is to participate in the Chinese equivalent of the Miss BumBum contest; however, the “King Kong Barbie” admits she has a lot of work ahead of her on this part of her body because she lacks any physical advantages like her contenders.

The commenters online seemed to be split on the matter whether they like the new fitness babe or not.

I’d have said shocked instead of stunned.

It's chun li from street fighter 😂