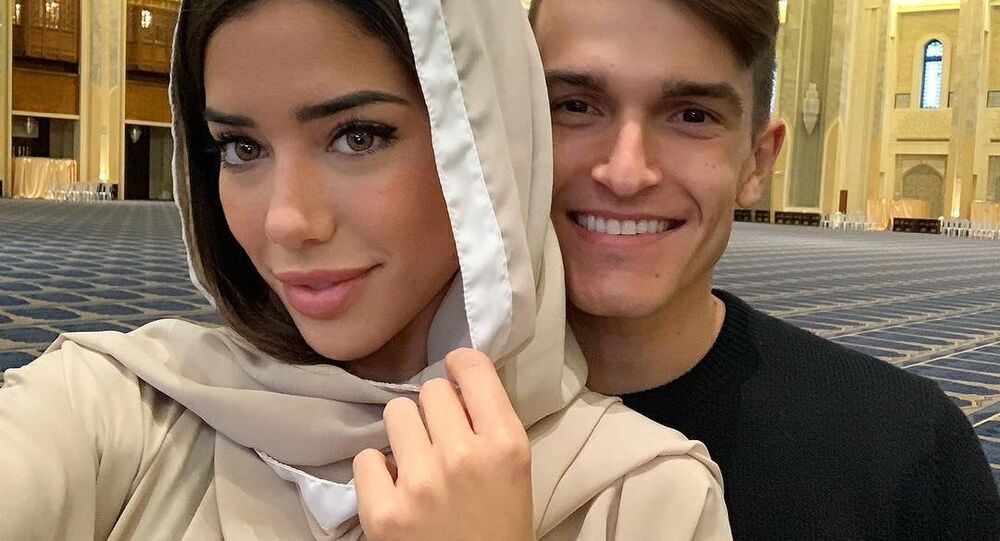 As soon as a picture of the two love birds, Denis Suarez and his stunning partner, in Kuwait’s Muslim sanctuary started circulating on social media, many butted in, arguing that when in Rome, one should do as the Romans do.

Arsenal star Denis Suarez has become a talking point all over Kuwaiti social media, after a picture of him and his partner visiting one of the country’s most iconic tourist attractions, the Grand Mosque, popped up online.

I will be always behind you!🖤

Many instantly took issue with the Spanish footballer taking a selfie at the Muslim holy site, expressing their discontent in comments below the snapshot sporting him, standing a step behind his bombshell girlfriend, Nadia Aviles, who posed in a beige scarf covering her head and shoulders matching the flowing upper part of her attire.

“He even doesn’t know what to do in the mosque”, one commenter said, with another one continuing along the same lines:

“U don't do that in a mosque hope u apologize to god if u believe in him if not delete this pic”.

Some speculated about Suarez entering the mosque wearing shorts, although it is not clear from the picture whether this really is the case:

“You should know something when you go to a mosque you should cover all your leg it is just for respecting the place”, one remarked.

However, it is the caption that fuelled most reaction.

“I will be always behind you!” Suarez wrote to accompany the picture.

“Fight for your place! Denis! We are Arsenal!🔥” one user wrote adducing a fire symbol, whereas another attempted to joke, remarking saucily:

Another chose to explain seriously how a man should behave in a Muslim sanctuary:

“Are you Muslim?” one asked with distrust,

There were, however, those who rose in the tourists’ defence, underscoring that they were just visiting.

"To those who are going hysterical over the fact the Denis Suárez toured the Grand Mosque, there's nothing in Sharia or law that doesn't allow him to!! Stop being so ignorant and stupid!" one user said, with another one trying to correct those who brought up certain rules that regulate visiting mosques:

"Anyone can go in, even non-Muslims and there's no sanctity for these spaces at all".

Meanwhile, the couple’s visit to the mosque went on to trend on Kuwaiti Twitter and has been covered on a number of local television channels.

In wake of the uproar caused by the incident, the general manager of Kuwait's Grand Mosque, Roumi Al Roumi, responded with a statement. While he didn't openly state that the couple went around some rules, he made the mosque's visitation guidelines clear, citing a certain code of conduct, which, among other things, prohibits people from wearing shorts or sleeveless tops when entering the space, al Rai newspaper reported.

"Those guidelines are available to visitors of the mosque in both Arabic and English", Al Roumi explained, adding that the mosque can in actual fact be entered upon the approval of the Ministry of Endowments, which, per the edition, has been responsible for the mosque's special visitation permits since 1994.

Indian Actor Swarmed by Fans, Dragged From Neck for a Selfie