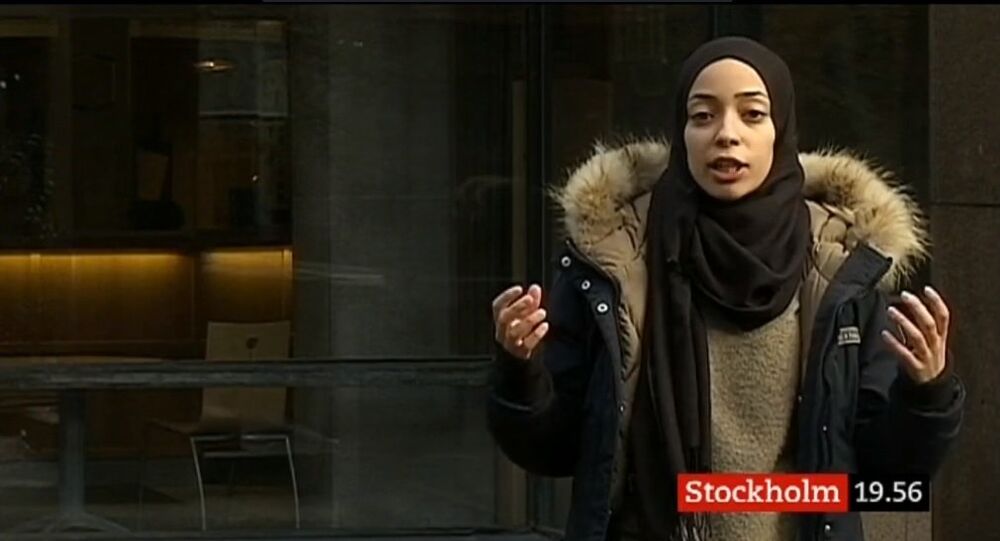 The tax-financed media giant's increasing use of veiled reporters has triggered strong reactions on social media, with many Swedes interpreting it as a token of "Islamisation" and bolstering the oppression of women.

For several days in a row, hijab-clad Cheyma Moufid has appeared on national Swedish broadcaster SVT as a reporter for the local news programme in the capital area.

According to the news outlet Fria Tider, Moufid has been practising at SVT since last autumn.

This week, Moufid appeared in a series of reports of the poor quality of snow removal in Stockholm, which has led to a lot of complaints and allegedly involves cheating on the part of the authorities. Moufid argued that Stockholm City has no control of snow removal in immigrant areas, such as Rinkeby and Tensta. Both of these are sometimes referred to as "no-go zones" and involve a certain risk even for police personnel.

On social media, the appearance of a veil-covered woman on TV screens sparked many critical reactions, with some interpreting it as a sign of Sweden becoming more Islamised and others suggesting that SVT supported the oppression of women.

"Now SVT has obviously shifted gear towards continued Islamisation in Sweden. A Muslim reporter in black veil put a finishing touch on a longer feature in tonight's broadcast of SVT Stockholm. Never before has SVT so clearly exposed this symbol to the world's most oppressive and destructive ideology and religion. But now we as taxpayers are forced to pay for this adaptation to Islam", Bengt Johansson wrote on Facebook, alluding to Sweden's mandatory "TV tax".

"Why should we be forced to see religious extremism expressed by a veil in SVT? Forced public service is obviously a tool of Islamisation", blogger and writer Katerina Janouch tweeted.

"This is something over 90% of the Swedish women have voted for, soon they will have to bear a headdress on themselves, will be interesting and see how many of them who vote for this in the next election…" another user chimed in.

"Hi, SVT! Why are you marketing garments that oppress women on your own reporters? Also, shouldn't your employees be free of religious attire? Hardly independent news agency. That's too bad", a user tweeted.

​Another user cited SVT's own guidelines where avoidance of religious symbols is recommended.

"It is about inclusion! Everyone gets to dress as they please and we have to show off their clothes all the time. Hope they hire a nudist", a user said on a fun note.

At the same time, many praised Moufid's good command of the Swedish language, unlike some previous publicity stunts by SVT.

Moufid first appeared on Swedish TV last autumn as an intern. Back then, her hijab was also perceived as oppressive to women and sparked negative reactions.

​SVT is the Swedish national public television broadcaster; it is funded by a public service tax on personal income and largely modelled after the BBC. By its own admission, it has been putting an emphasis on diversity and inclusion.