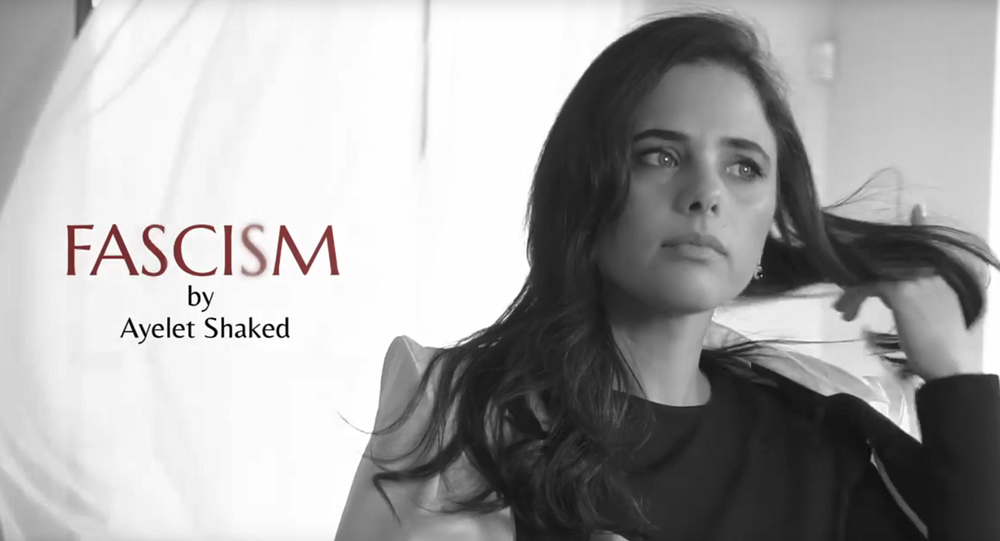 A new ad featuring Israeli Justice Minister Ayelet Shaked has left Twitterers puzzled. While some have argued it’s satirical, others have noted the mockery doesn’t cross the language barrier well and that the ‘joke’ hits a little too close to home for it to work.

In the 44-second video posted on Shaked's Twitter page Monday afternoon, the justice minister is seen striking sultry poses as a voice-over of her lists in Hebrew the names of different policies she supports, such as "separation of powers." At the end of the video, she picks up a bottle of perfume labeled "fascism," sprays herself with it, and says to the camera: "I dunno. For me, it's the scent of democracy."

​Aside from the English label "fascism" on the perfume bottle, everything else in the video is in Hebrew. That's created a lot of diverging opinions about what the ad means, not in the least of which because Shaked's party, Habayit Hayehudi, or the "Jewish Home Party," has been called "Israel's KKK," according to Israeli newspaper Haaretz.

One journalist reflected on the ad, calling Shaked "Viktor Orban on steroids," after the far-right Hungarian president.

This is one of the most bizzare election ad you have ever seen: Israel's Minister of Justice (!!) Ayelet Shaked plays a model, sprays herself with "Fascism" perfume and says: "Smells like democracy to me". Viktor Orban on steroids pic.twitter.com/s8Y4Oziw75

​Another reporter called it out for its misogyny in particular, saying, "If you like sexism with your Supreme Court bashing, Israeli Justice Min Ayelet Shaked has an ad in which she plays a fashion model, sprays herself with eau de fascism & fixes her sexy gaze on you & to say ‘I dunno. For me it's the scent of democracy.'"

If you like sexism with your Supreme Court bashing, Israeli Justice Min Ayelet Shaked has an ad in which she plays a fashion model, sprays herself with eau de fascism & fixes her sexy gaze on you & to say “I dunno. For me its the scent of democracy.” pic.twitter.com/JlPRYAQ3r8

​Both Shaked and her party have a history of vicious attacks on Palestinian Arabs. In 2014, Shaked drew ire for a now-deleted Facebook post in which she quoted Israeli author Uri Elitzur referring to Palestinian children as "little snakes" and asked, "What's so horrifying about understanding that the entire Palestinian people is the enemy?"

Jewish Home recently penned an alliance with another far-right party, Otzma Yehudit, which is run by followers of an anti-Arab rabbi named Meir Kahane who founded a fascist gang called the Jewish Defense League that advocated for total racial separatism in Israel. The deal was orchestrated by Israeli Prime Minister Benjamin Netanyahu, for whom Elitzur once worked as a speechwriter, and who is now seeking re-election in April.

"These guys, ideologically, they're no different from Netanyahu, but they just don't have the good manners that he does," Israeli anti-Zionist activist Miko Peled told Radio Sputnik's Loud and Clear on March 2.

Kahane was banned from running candidates in Knesset elections in the 1980s due to his racist positions and vocal support for terrorism against Palestinians, and another Otzma Yehudit candidate, Ben Ari, was barred on Sunday from participation in the upcoming Knesset elections for similar reasons, Haaretz reported.

That said, others on Twitter Monday came to Shaked's defense, arguing that the ad was satirical, mocking the slander of fascism applied to her by the left.

I'll break down the latest campaign ad:
It's a spoof of a perfume called fascism.
The ad lists various objectives the Justice Minister is fighting for, such as separation of powers, that the left is claiming is fascist.
At the end @Ayelet__Shaked says"Smells like democracy to me"

​It definitely reminds one of this satirical "Saturday Night Live!" sketch from March 2017 in which Scarlett Johansson plays Ivanka Trump in a fake perfume ad for a scent dubbed "Complicit: the fragrance for the woman who could stop all this, but won't," a play on the developing Russiagate scandal.

One journalist conceded the ad was "really tone deaf," but said that English-language publications were misunderstanding its satirical content.

It’s a really tone deaf ad, but most of the descriptions I’m seeing in English are pretending it’s a defense of fascism when it’s not. She’s clearly saying she’s accused of fascism but that the policies listed in the ad (which most would-be translators skip) are democratic.

​However, critics noted that the miscommunication is really the fault of the video's creators.

Maybe you should have thought about a campaign video that didn't tell non Hebrew speakers that she's a fascist and require a subtle explanation of the sarcastic in joke?