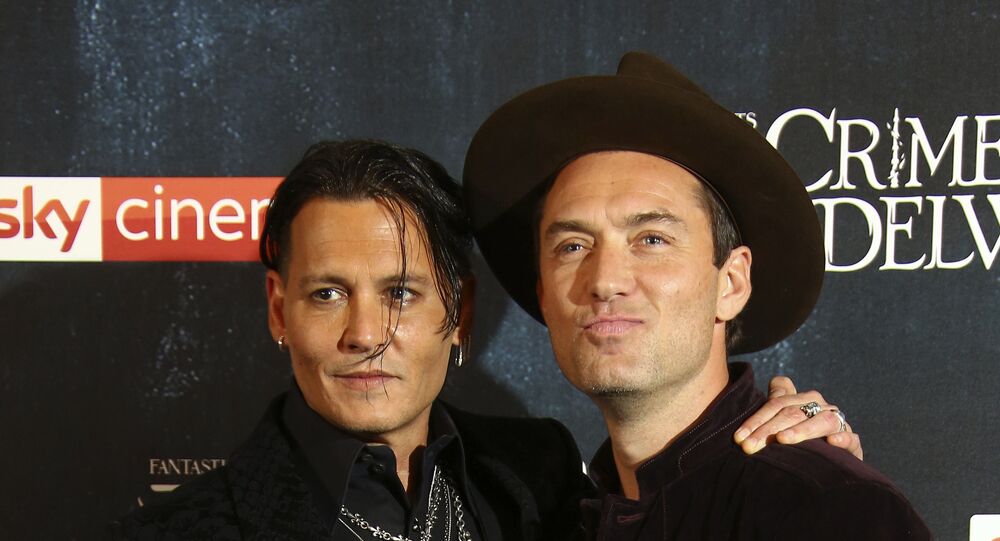 J.K. Rowling has been dropping bombshell revelations on her smashingly successful books about the wizarding world, delving into the histories of characters and giving fans plenty to talk about.

The Harry Potter author has confirmed a long suspected fan theory that the Fantastic Beats wizards, Albus Dumbledore and Gellert Grindelwald, had a “sexual dimension” in their relationship.

© AFP 2021 / Daniel Leal-Olivas
'Pokémon Go'-Like Mobile Game Featuring Harry Potter Sends Twitter Into Frenzy
In the past, J.K. Rowling had hinted that the beloved Hogwarts headmaster, played by Jude Law in Fantastic Beasts: The Crimes of Grindelwald, and villain Gellert Grindelwald, played by Johnny Depp, had a passionate love affair during their teenage years.

The suspicions had been growing since Rowling revealed that Dumbledore was gay and in love with Grindelwald, and fans were dying to know whether the feelings were reciprocal.

“Their relationship was incredibly intense. It was passionate, and it was a love relationship. But as happens in any relationship, gay or straight or whatever label we want to put on it, one never knows really what the other person is feeling. You can’t know, you can believe you know. So I’m less interested in the sexual side – though I believe there is a sexual dimension to their relationship – than I am in the sense of the emotions they felt for each other, which ultimately is the most fascinating thing about all human relationships”, Rowling said in a feature on The Crimes of Grindelwald Blu-ray DVD.

As one would imagine, her comments have been met with a plethora of tweets ridiculing the too much information element to the writer’s secret-spilling spree:

nobody:
literally no one:

jk rowling: the sorting hat was dumbledore’s sex partner when grindelwald wasn’t around. also, dobby is a lesbian.

No one:
J.K. Rowling: Dumbledore and Grindelwald actually met on an app called WizrD

Me: I —
JK Rowling: Hagrid has paid for feet pics

J.K Rowling reveals Neville Longbottom was circumcised at age 29 due to a Diffindo charm gone wrong

Year 2029
Nobody:
JK Rowling: Harry Potter was a GIRL!

Some people on Twitter, however, gave Rowling a hard time for her comments, saying that the story should have been written into her screenplays, rather than revealed later in a bonus feature:

Write it in a book, Rowling, or it didn't happen.

So JK Rowling has revealed Dumbledore and Grindelwald were in a sexual relationship, but still omits it from the films. Just like Dumbledore being gay. Representation only matters if it’s seen. #HarryPotter #FantasticBeasts

I would LOVE some actual gay representation in the HP universe. But JK Rowling is not giving us that. There’s a difference between Dumbledore being gay and there actually being even the slightest sign of that, and her just,, saying he’s gay.

Rowling wants the credit for writing representation without bothering to write it.

I love Harry Potter so much but JK’s blatant (and failing) attempts to make Dumbledore any gayer without actually having the guts or motive to actually write it… Smh, making a character gay to seem woke or give them more depth… Sloppy, Rowling.