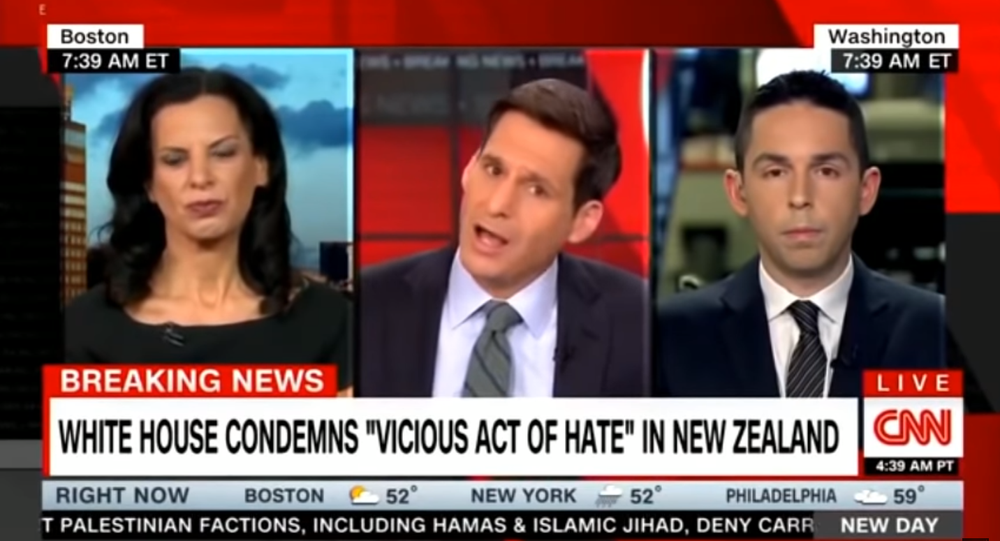 At least 49 people were killed and 48 more injured following a deadly shooting attack at two mosques in Christchurch, New Zealand during Friday prayer. On the basis of a manifesto posted by one of the suspected shooters, police believe the attack was carried out by individuals motivated by white supremacist ideology.

President Donald Trump took to Twitter to offer his "warmest sympathy and best wishes…to the people of New Zealand" over the "horrible massacre in the Mosques" on Friday.

My warmest sympathy and best wishes goes out to the people of New Zealand after the horrible massacre in the Mosques. 49 innocent people have so senselessly died, with so many more seriously injured. The U.S. stands by New Zealand for anything we can do. God bless all!

Trump's remarks were echoed by White House Press Secretary Sarah Sanders, with the administration spokeswoman describing the attack as "vicious act of hate" and saying the US stood "in solidarity with the people of New Zealand and their government."

White House communications director Mercedes Schlapp said she spoke to Trump about the incident, and that "he made it very clear that this is an act of terror, this is a horrific, evil crime especially targeting these innocent lives at a place of worship." Trump will speak to New Zealand Prime Minister Jacinda Ardern about the attack later Friday.

© AP Photo / Mark J. Terrill
CNN Likens Trump to Illiterate in Story on Why Ivanka Has Security Clearance
In a move that led to a backlash online, CNN, the television network whose reporting Trump has repeatedly characterised as "fake news," seemed to have attempted to tie the president to Friday's deadly act of terrorism.

"The White House is calling this a 'vicious act of hate'…that is crystal clear here. I am curious though, pouring through this manifesto, looking at the language this killer used, you see 'invasion', you see references to 'replacement' which is what people in Charlottesville were protesting and crying as they were marching through the streets there. This killer even says he looks at President Trump as 'a symbol of white identity.' Why? Why do you think there are people self-proclaimed white supremacists around the world, who see our president in this way?" Berman asked.

Kayyem, who served at the Department of Homeland Security during the Obama administration, agreed with the CNN host, suggesting that followers of this ideology were "given credence, and I'm being careful here, validity, justification for their horrible violent thoughts, because it's amplified in the public space, either by our president or reporters or analysts on TV or in literature."

"Being very careful, the president is not responsible for what happened in New Zealand. But the president's language to date has been irresponsible knowing the groundwork of white radicalisation is going on worldwide right now," the former Obama official added.

© CC BY 2.0 / red, white, and black eyes forever / CNN Center
CNN Host Says Ethiopian Plane Crashed Because of US Government Shutdown
Kayyem also criticised the Trump administration for allegedly "failing" to call the incident "an attack on Muslims and on Islam," suggesting the failure to do so "minimises the harm and the pain that that community is suffering right now."

Berman and Kayyem's remarks were instantly attacked on Twitter, with netizens calling CNN's implicit claim that Trump was somehow to blame for the attack "disgusting," and insisting that the president has always condemned white supremacism.

Combing through the morning coverage of the New Zealand terror attack on CNN and, despite their insistence that they're not suggesting Donald Trump made the gunman pull the trigger, they're doing it without actually saying it explicitly and it's disgusting.

I went to CNN this morning thinking they would give a good report on the tragedy of the Muslim Community in New Zealand. But they were busy saying it was Trumps fault. pic.twitter.com/Zsr6QQVoA3

Others pointed to what they said were factual mistakes in CNN's reporting, accusing Berman of "flat-out lying" in his claims and urging him to "stop."

.@JohnBerman you flat-out lied on @NewDay, when you claimed @realDonaldTrump used the phrase "very fine people" to refer to those like the #NewZealand shooter. Trump was not referring to them, as CNN's own 2017 reporting confirms. @CNN must retract the #CharlottesvilleHoax. Stop.

Other users pointed to CNN guests, including Senator Richard Blumenthal, who seemed to similarly attempt to connect the shooting to Trump.

Absolutely disgusting that @CNN would be okay with a contributor tying @realDonaldTrump to the shooting in #NewZealand. They wonder why they’re trailing @nickatnitetv in ratings, it’s because they are #FakeNews. https://t.co/xSkveJwRu5

The antagonistic relationship between Trump and CNN goes back to his campaign for the presidency in 2016. Trump has repeatedly characterised CNN's reporting as 'fake news' and singled the network out at press conferences to accuse them of spreading disinformation and speculation about him.