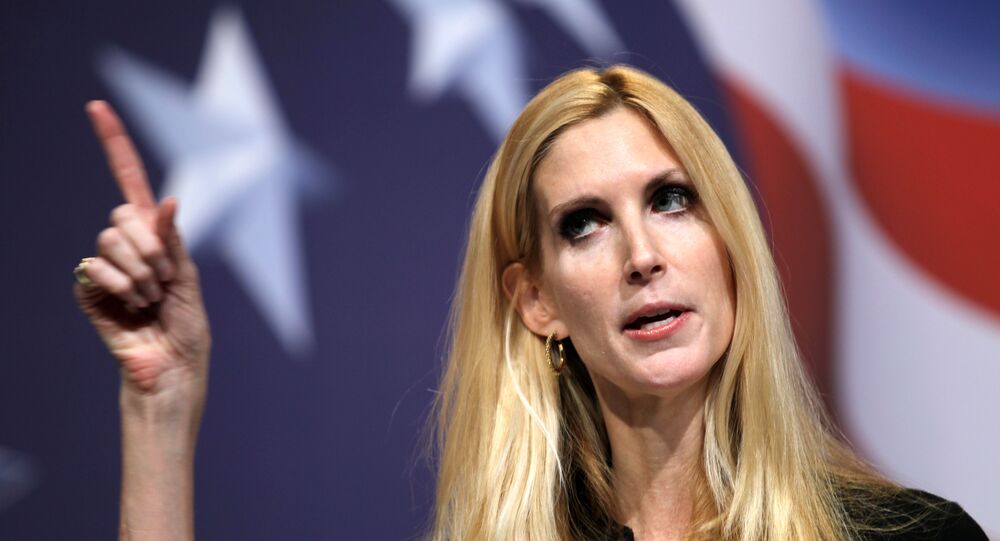 Once an adamant Trump supporter, Coulter recently turned against the US president with critics of POTUS’ approach to fulfilling his electoral promise to build the border wall.

US President Donald Trump came up with harsh criticism towards prominent conservative pundit Ann Coulter, calling her a "wacky nut job" in his latest Twitter rant. Trump slammed Coulter's vision of the progress on the border wall, calling it "winning on the Border" despite Democrat attempts to stop him.

The president also noted that "tens of thousands of illegals" have been arrested at the US-Mexico border, without specifying during which period, also noting that under any other president "millions would be pouring in".

Trump's criticism of long-time supporter Coulter drew the attention of netizens, who already anticipate a fascinating feud between the two.

This Ann Coulter and Trump feud is like watching Lex Luthor fight the Joker. I'm not rooting for either but it's still fun to watch.

Fighting between the crazies. Get out the popcorn. Lucifer & his bride are gonna go to war. pic.twitter.com/k8U9GaUDUa

Wacky Nut Job Ann Coulter? Looks like a Republican Civil War going down and we’re here for it!🍿

Many Twitterians wondered how it arrived at hostility between the two, after Trump praised Coulter's book and invited her to his rallies.

But, “wacky” @AnnCoulter wrote this book about you to which you’ve praised. 👀 pic.twitter.com/CcgzAxteTh

Some of them suggested that Coulter can now become a poster girl of left-wingers in the US.

Well, I guess Ann Coulter will become the new hero of the Left now.

Others alleged that the dispute between the two can have more personal roots, rather than disagreement on politics.

I think the whole trouble between @realDonaldTrump and @AnnCoulter happened when he went to grab her p—- and found out she has a d—-.

Trump's supporters dismissed Coulter as an irrelevant attention-seeking figure, which Trump, in their opinion, should just ignore.

The controversy follows US President Donald Trump requesting additional financing for his border wall with Mexico after Congress refused to grant him the needed $5.7 billion. Earlier, disagreements on the wall's funding led to a record-long government shutdown. After the shutdown was resolved, with Trump securing only $1.6 billion for the construction, the US president declared a state of emergency on the southern border to allocate the necessary funds using emergency powers.