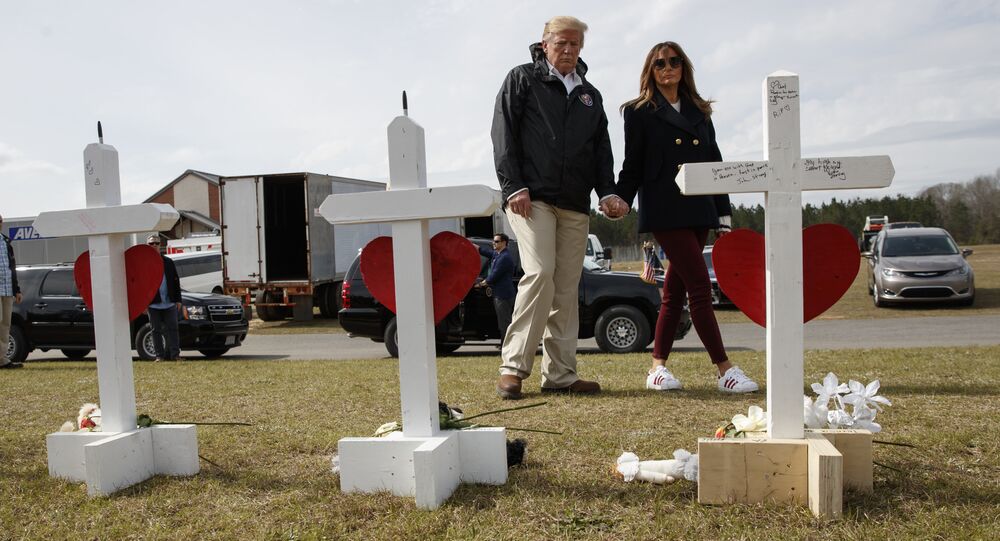 Speculations about the alleged stand-in wife have been emerging here and there since 2017; it all started with a CNN clip in which the first lady was standing alongside Donald Trump during a press event.

A watchful Twitter user has shared photos from the first couple's visit to tornado-wracked Alabama to pay respect to the 23 victims of the deadly winds.

The self-styled sleuth emphasised that the woman standing next to Donald Trump appeared to be about a half-head shorter that the president; he also pointed to her perceived different facial features, concluding that she was none other than a body double.

First three taken this morning. Fourth one recently for height comparison. Now unless Melania has shrank by about 6 inches (even Barron is taller than her) and grown jowels overnight, this ain't her. pic.twitter.com/4i6SPbVIom

​Although Melania was wearing sneakers that day — despite of her fondness for sky-high heels — the conspiracy theory has spread across social media with astonishing speed.

President Trump and who now.

I also use Rent-a-Melania. It's the best.

​"We know it's not Melania because she's holding his hand'," another user joked, referring to multiple occasions on which Melania appeared to rebuff her husband's attempts to hold hands.

How many stand-ins are there? This one must be new… the hand-holding is a dead giveaway. 😏

Other photographs from the event, however, appear to leave no doubt that this theory is far-fetched, and it was Melania indeed.

This is not the first time the first lady's appearance whipped up the "Melania body double" conspiracy.

Last May, Melania disappeared from the public for three weeks in connection with kidney surgery. She made her first public appearance in 24 days at a reception for military families, but sceptics claimed she was replaced by an imposter, prompting Donald Trump to go on an online rant about so-called fake news.

In 2017, a Twitterstorm broke out in the wake of allegations that the sunglass-wearing woman standing next to Trump when he was discussing Hurricane Maria was not the actual first lady.

This post has since been retweeted over a hundred thousand times, causing an avalanche of "fake Melania jokes".

This is not Melania. To think they would go this far & try & make us think its her on TV is mind blowing. Makes me wonder what else is a lie pic.twitter.com/JhPVmXdGit

The White House dismissed these theories as "ridiculous". "Once again, we find ourselves consumed with a ridiculous non-story when we could be talking about the work the first lady is doing on behalf of children, including the opioid crisis that is gripping our nation," said East Wing communications director Stephanie Grisham.