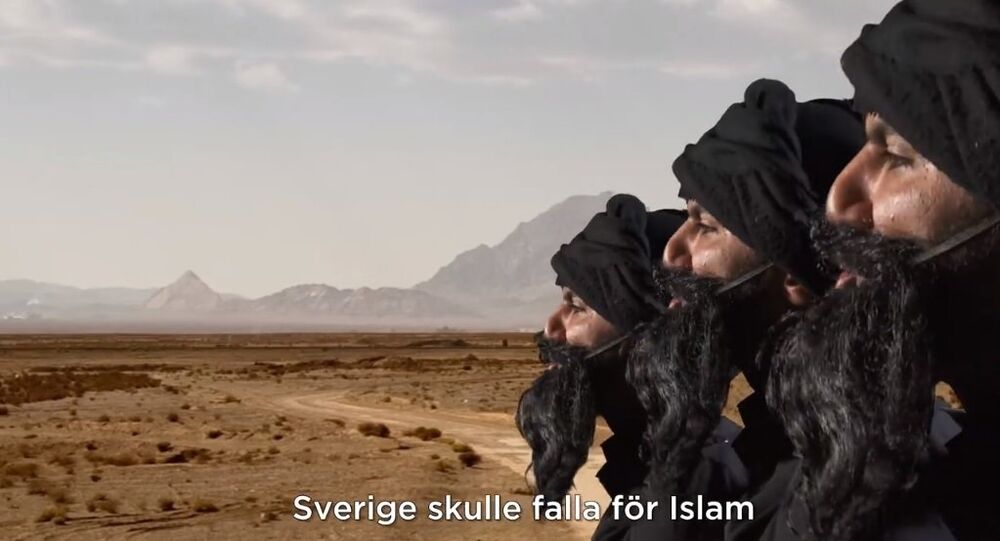 A music video mocking jihadists and Daesh* has caused strong reactions among the Swedish public. The flood of angry comments and threats has prompted national broadcaster SVT to remove the video from Instagram.

In the hip-hop clip that combines real footage with rapping in mock accent, comedians joke about Islamists motives for going to Syria, such as lacking wi-fi or a recreation centre, and their homesickness when the "caliphate" lost its influence in most of the Middle East.

"My mother told me, 'Mohammed, you have to integrate' // I responded, mother, I'd rather f****g detonate", the protagonist with a fake beard and a turban raps about his dream of becoming a "f*****g IS-traveller".

"Now send food and clean underwear", a "repentant" terrorist raps later on, culminating with the chorus "Sweden should have fallen for Allah, but something went wrong".

The clip also takes a swing at Swedish politicians' notoriously lax attitude towards radical Islamists and includes lines such as "I phoned Gustav Fridolin and demanded: Gimme cash // I need a cultural benefit to be able to join Daesh". Fridolin is Sweden's former Education Minister from the Green Party.

The video also includes footage of former Culture and Immigration Minister Birgit Friggebo from the 1990s trying to get an immigrant crowd to sing "We Shall Overcome", which was considered a major embarrassment.

However, when SVT posted the video on social media, its channels were overwhelmed with comments. On Instagram, the broadcaster had to turn off the comments after the comments section "degenerated into verbal attacks". The video was later removed from Instagram altogether.

"SVT is able to handle criticism, but we cannot have our followers be tramped upon in the commends field. If SVT cannot offer an environment for constructive dialogue, then we consider it a better option to close the comments field", the broadcaster wrote as quoted by the news outlet Nyheter Idag.

According to screenshots by a user, reactions on Instagram included open abuse such as "f*****g sons of b****s" and death threats.

"The fact that such types became triggered is a sign that 'Swedish news' hit the right stop with its Daesh satire", he ventured.

​SVT's Facebook page, was also overwhelmed by reactions, receiving some 900 comments. There, the reactions were somewhat more restrained, but many viewers voiced criticism nonetheless.

"One can joke about [Daesh], but not in such a tasteless way", was a common theme of reproach, while many argued that SVT was wrong to link Daesh with Islam. SVT was also accused of "de-humanising people from the suburbs by claiming that their main ambition is to become a terrorist", as well as spreading "racist stereotypes".

At the same time, many viewers were totally happy with SVT's performance.

"Well done, SVT! The fact that people are laughing at this shows just how accurate the video was. Then the fact that some Swedish snowflakes are seriously upset by poking fun at [Daesh] is beyond my understanding. Still, keep up the good work" a user cheered.

"Lay off, all you easily offended types. No normal person should be offended if you make fun of [Daesh]. You can make fun of KKK too, and as a Christian I won't be upset at all", another one commented.

"Very brave of you to make fun of Daesh, considering Jyllands-Posten, Lars Vilks & co. Well done, but the price can be high", a user praised SVT, recalling the Muhammad cartoons controversy in 2006, which still lingers on after more than a decade.

Over the past weeks, the debate over what to do with about 100 jihadists with Swedish citizenship who are now stuck in the Middle East has been raging in the Scandinavian country. Polarising opinions have been voiced, from prosecuting them in Sweden or arranging a Nürnberg-style international tribunal in the Middle East to taking them back for rehabilitation. Sweden's mainstream media, including SVT, has run several stories of "remorseful" terrorists or marooned Daesh brides or widows with children.

"Swedish news" is no novice to controversy. In 2018, Jesper Rönndahl sparked international outrage by running a segment on mock "toilet rules", imploring Chinese tourists to stop defecating in public. In response, Beijing accused Rönndahl of fuelling racism and xenophobia and demanded an apology.