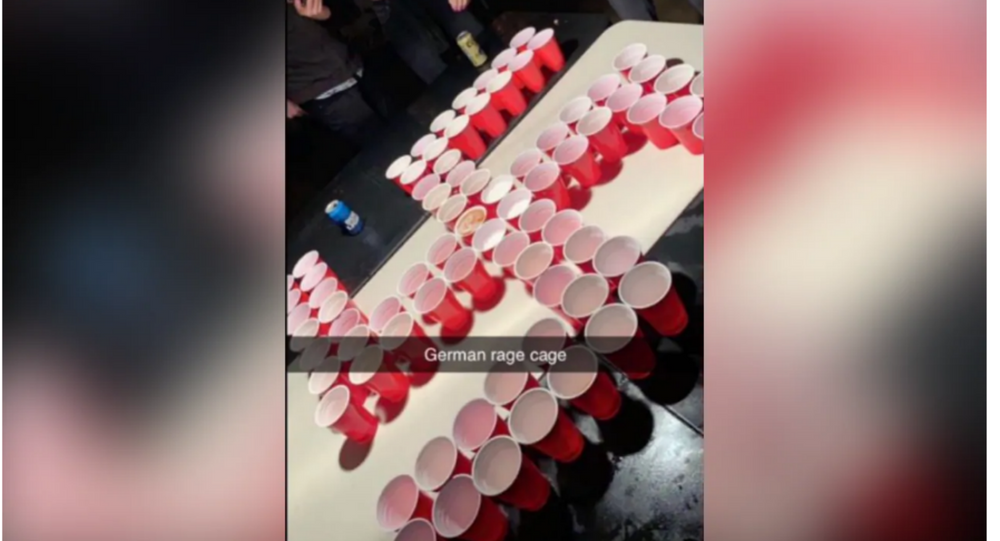 A group of Newport Beach, California, students are under fire after photos of them flashing the Hitler salute while standing over cups arranged in a swastika at a party over the weekend surfaced on social media.

According to school officials, students from Newport Harbor and Costa Mesa High School posted photos of themselves on popular multimedia messaging app Snapchat playing beer pong with cups arranged in the shape of a swastika, the emblem of the German Nazi party. The students, whose names have not been revealed, were also photographed flashing the Nazi salute, a greeting gesture that was used to express obedience to Adolf Hitler in Nazi Germany.

​​"We were recently made aware of social media postings involving some students who created inappropriate, anti-Semitic symbols and possible underage drinking," Newport-Mesa Unified School District officials wrote in a letter sent to parents Sunday, the Los Angeles Times reported. "While these actions did not occur on any school campus or school function, we condemn all acts of anti-Semitism and hate in all their forms."

Vice president of the Newport-Mesa school board Martha Fluor and superintendent Fred Navarro first became aware of the photos Sunday morning after receiving messages from concerned community members who had seen the images circulating on Twitter.

​"I find it just reprehensible that we still have pockets of our community that still think this is okay," Fluor told the Los Angeles Times. "This is unacceptable behavior both from a health standpoint with potential underage drinking as well as from a moral and ethical position."

She also noted that school district officials met Sunday to discuss the incident and are currently in discussion with law enforcement officials over potential disciplinary action the involved students may face.

​Several students at the school who were not involved in the incident spoke to local news outlets over their peers' actions.

"Seeing my peers celebrating — not only taking the time to carefully lay out a symbol like that but to then do the salute — and smiling and laughing while they're doing it; and that no one thought it was a bad idea is pretty shocking to me and bothers me a lot," Newport Harbor High School senior Sam Quattrociocchi told CBS News.

According to Rabbi Abraham Cooper, associate dean at the Simon Wiesenthal Center — a global human rights organization dedicated to confronting anti-Semitism — all students involved in the photos should be suspended.

"This is an insult to the 6 million Jews who died in the Holocaust," Cooper told the Los Angeles Times. "It's also an insult to the many thousands of families in Southern California whose loved ones in the Greatest Generation fought, bled and died to defeat the Nazis and defeat the swastika."

​After the incident, Rabbi Peter Levi, regional director of the Anti-Defamation League, which has as its mandate to "stop the defamation of Jewish people," stated that the organization runs education programs in several Orange County schools but not at the two schools involved in the incident.

"The goal is not to be reactionary when a school has such a horrific incident, but to be constantly talking with young people about hatred, about bias, so that the students themselves would've never let this happen," Levi told the Los Angeles Times.

The Anti-Defamation League did not immediately respond to Sputnik's request for comment. In addition, Newport High School Principal Sean Boulton did not confirm whether disciplinary action will be taken by the school over the students' actions.