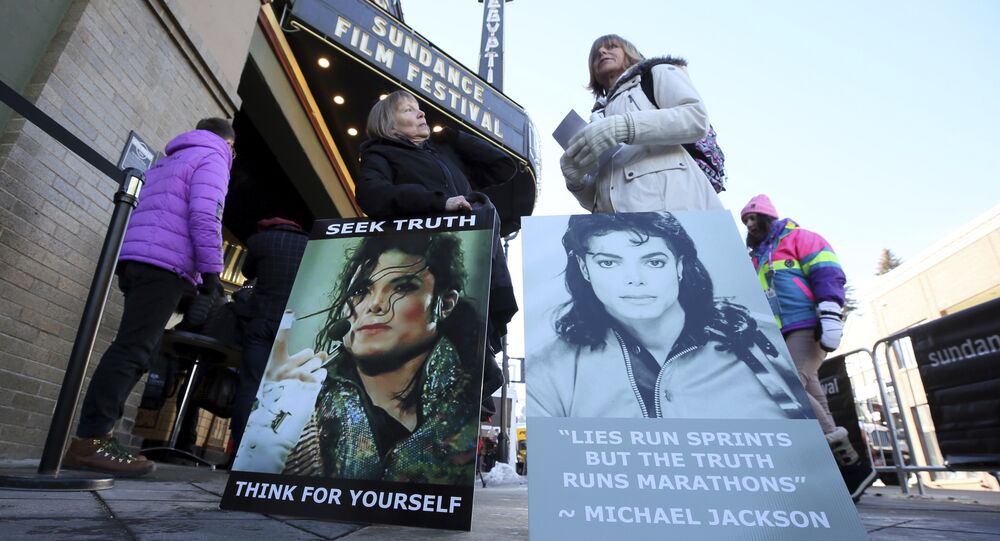 Before the film was aired for the first time at Utah’s Sundance Festival, the Jackson estate made an attempt to prevent it from hitting screens, arguing the production companies’ only goal is to cash in on the music icon’s heritage and personal life, despite the fact he had been ruled absolutely innocent by a court in 2005.

Reactions came in abundance, ranging from distrust to total admiration, with many showing their unconditional support for those who had the courage to come forward.

Wade Robson and James Safechuck. As s survivor of childhood sexual trauma I believe you. #LeavingNeverland

It’s amazing how brainwashed MJ fans are even now. I believe Wade & Jimmy. MJ was not a saint or God he was a fallible human being just as capable of evil as anyone else. #LeavingNeverland

Yet, a lion's share of netizens couldn’t help but draw attention to the way the children’s "money-thirsty" parents behaved, “allowing them to sleep in a grown man’s room lurking around outside”. “That’s your child!” one exclaimed.

I can’t watch #LeavingNeverland right now. I’m going to reserve my judgment for another time. I don’t understand the mentality of a woman who allows her child to sleep in a grown man’s room lurking around outside. That’s your child!!!

“All of the parents should be indicted for selling their kids for gain”, a different user asserted, with others agreeing that although it was common knowledge that “Jackson was a predator”, it is hugely disturbing how mothers reacted to “star Jackson’s” proposals.

All of the parents should be indicted for selling their kids for gain.#LeavingNeverland

Many expressed their disgust over the matter, picking up on the kids' parents' strong desire to scoop a profit out of their children's communication with the star, as well as reminding others of the fact that Jackson was fully acquitted in 2005.

Been an HBO fan girl for life so I am super disgusted that they would choose to produce pure BS that is Leaving Neverland. MJ was acquitted on ALL charges. There is no evidence to point towards any inappropriateness. Those kids' parents were scums who wanted money all along.

To WR&JS and all the other scums around this #LeavingNeverland BS: I feel SORRY for you. You had te chance to to prove yourself as worthy as MJ,BUT YOU FAILED. You could have fought for truth,but you chose not.If he didn’t do what you expected him to,is not his fault #MJInnocent

The racism in this LN situation is so serious, but the masses are so blinded for his fame and money it REALLY breaks my heart. If it was any other artist would THEY have the trail so exposed in the midia? Would THEY be so ridiculously accused? #MJInnoccent #MJTruthSquad https://t.co/jgUWEG2whK

Even a respective hashtag, #MJInnocent, is recurrent in users' tweets:

#LeavingNeverland may be one of the biggest buckets of bullshit I have ever witnessed in my life. A boring, sappy, indescribably inaccurate documentary rife with contradictions and moronic statements.

Calling this a "mockumentary" is an insult to mockumentaries. #MJInnocent

Many asserted the film is full of inconsistencies and assumptions contradicting common sense:

Here's what they won't mention in leaving Neverland pic.twitter.com/J2uqv2SbF3#LeavingNeverland

Why in the world would Michael Jackson put Wade Robson on his defense team if he did anything inappropriate to him? Lets start applying some common sense here. #MJInnocent #LeavingNeverLand

michael jackson was investigated for 10+ years (phones tapped, computers tapped, etc) and they found absolutely NOTHING. ask yourself, would law enforcement allow a black man to get away with such heinous crimes? #LeavingNeverland #MJInnocent

Safechuck and Robson allege that Jackson began molesting them when they were little boys, although during Jackson’s 2005 sexual abuse trial, both denied the fact, with Robson even appearing as a witness for the musician’s defence. The King of Pop was acquitted of all charges at the time.

“It felt like you were bonding, in a way. The tour was the start of this sexual, like, couple relationship”, Safechuck shared.

Robson meanwhile claimed the relationship with the singer turned sexual when they met for the second time, during a family holiday in Los Angeles. According to the man, Jackson convinced Robson’s mother to let her son stay with him while the rest of the family went to see the Grand Canyon. He went on to depict the oral sex he allegedly performed on him, saying he and the boy “were brought together by God”. “We were meant to be together. This is how we show love” – this is what, as Robson claimed, Jackson uttered at the time.

Both accusers alleged the singer specially taught them how to cover up their tracks, “not to go to jail for the rest of [their] lives”. Robson claimed Jackson told him if anyone “ever found out what we were doing about the sexual stuff, that he and I would be pulled apart and we would never be able to see each other again”, while Safechuck alleged the pop icon would run drills with him, as “he would pretend like somebody was coming in and you had to get dressed as fast as possible without making noise”.

The documentary naturally hit a nerve with the Jackson estate, which had its say even before the Sundance premiere:

“This is yet another lurid production in an outrageous and pathetic attempt to exploit and cash in on Michael Jackson”, the Jackson estate’s January statement read.

A member of the Jackson family also recently weighed in on the debate, coming to the singer’s defence against the new and likewise old molestation allegations. Speaking in a CBS This Morning interview on Wednesday, Jackson’s brother Jackie, although admitting that he hadn’t seen the documentary, said the singer stood for “bringing the world together, making kids happy”. In the same sit-down, another brother, Marlon, acknowledged that Jackson never behaved “inappropriately” with children.

HBO, meanwhile, confirmed that “despite the desperate lengths taken to undermine the film, our plans remain unchanged”, and they will go ahead with production, leaving it to viewers to assess it.