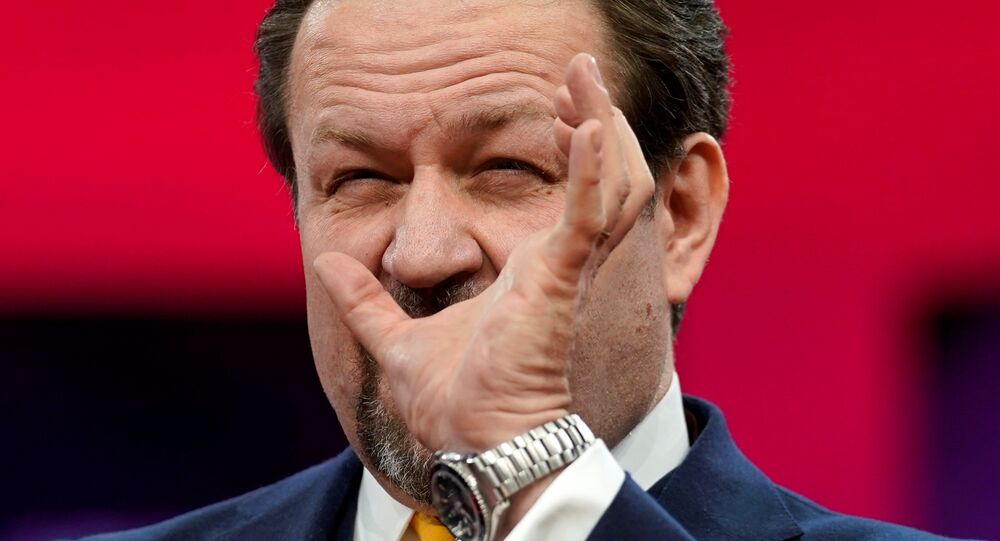 Right-wing media personality and former Donald Trump adviser Sebastian Gorka gave conservatives a litany of things to fear from Democrats during his Thursday speech at their annual political action conference, but none turned more heads that when he suggested Democrats aimed to fulfill Joseph Stalin’s dream of stealing their hamburgers.

"You know what the biggest threat to America is? Not socialism in Moscow — socialism here, in America," Gorka raged Thursday at the CPAC conference in Maryland, citing a poll that showed over half of Americans "want to live in a socialist America."

"That is why Alexandria Ocasio-Cortez," Gorka said, pausing and gesturing for the crowd to boo, "has introduced a Green New Deal which is a watermelon: green on the outside, deep, deep red communist on the inside."

© Sputnik / RIA Novosti
Holodomor Hoax: West's 'Golden Embargo' and Soviet Famine of 1932-33
"They want to take your pickup truck; they want to rebuild your home; they want to take away your hamburgers — this is what Stalin dreamt about but never achieved," Gorka said, as the crowd went quiet and a couple of laughs were heard. "You are on the front lines of the war against communism coming back to America under the guise of ‘democratic socialism,' which is just a PC term for communism. I want everyone to take to heart: Donald J. Trump is never going to let it happen, and as he said to Congress, ‘America will never be a socialist country.'"

To review, Stalin was the leader of the Soviet Union from roughly 1924 or so until his death in 1953 and oversaw the country's transformation from a rural, backwards, semi-feudal society to an industrialized, urbanized socialist state. Along that way, that meant seizing a lot of people's wealth and land and redistributing it to the poor peasants and workers, and so his era is just as much associated with famines and shortages as it is with hydroelectric dams and machine tractor stations.

However, what's really interesting is that Stalin was actually fascinated by hamburgers. When his foreign trade minister, Anastas Mikoyan, went to the US in the 1930s, he visited department stores and shops and brought back examples of American culture and industry to the USSR for them to study and learn from. That included machines for making ice cream, mayonnaise, and — you guessed it — hamburger patties.

In fact, a type of ground beef patty that became popular in the Soviet Union was dubbed a "Mikoyan cutlet" after him, according to the New York Times.

But Twitter doesn't care about scholarship like this; it cares about memes and dragging people who say silly things, and that's what happened to Gorka.

Many users were quick to note that the McDonald's hamburger chain's patty purloining persona, the Hamburglar, could have secretly been the Soviet dictator all along.

I scared up this colorized photo of Stalin pic.twitter.com/mTVCXIKRHl

​It's hard to tell with that mask on his face!

​An interesting historical suggestion: perhaps Stalin's murderous purges were actually just because he was hangry?

People always forget how hangry Stalin was and his passion for hauling things.

​Could Stalin be in charge of the conservation group The Sierra Club, too? Perhaps with that beard, John Muir could be mistaken for an old Bolshevik.

​However, one user remembered where they'd seen a whole bunch of burgers together recently:

​Of course, who knows where the communists will stop! It may not be with the hamburgers.

Communists: not content to come for the toothbrush, they are now after your food as well. Next could only be your digestive tract itself. https://t.co/cyH3MjkvH0

© Wikipedia
Overlord v Bagration: A Tale of Two WWII Battles
Interestingly enough, there was a real, actual project proposed by Stalin called the "Great Plan for the Transformation of Nature" in the years after World War II that sought to turn the steppes of Central Asia and southern Siberia into something resembling the US' Great Plains, with similarly farmable results. That grand plan included reversing the course of several Siberian rivers so that they flowed south instead of north, New Scientist noted.

Nothing about stealing hamburgers, though.