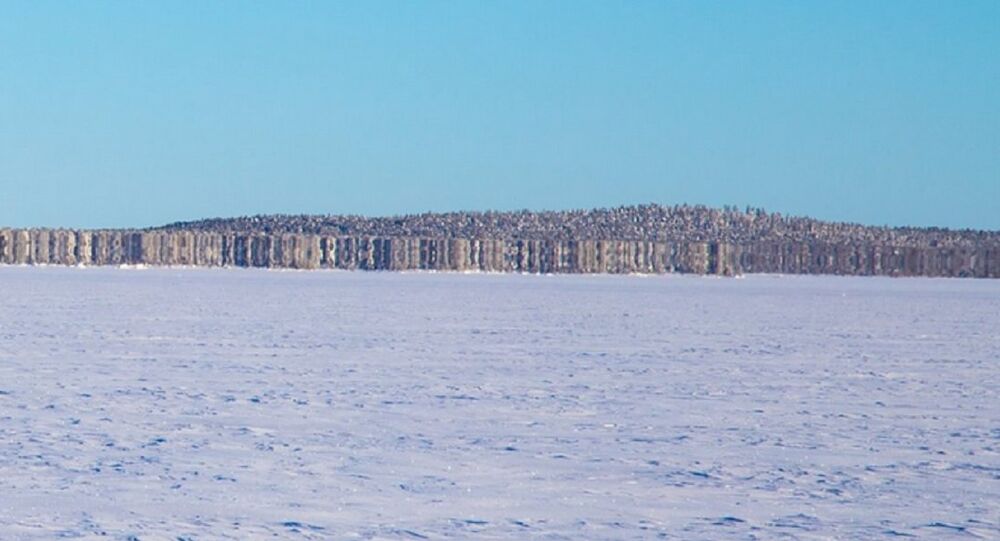 A "new" island that popped up in a frozen lake in northern Finland, leaving the border guard and ordinary Finns equally puzzled, turned out to be a mirage.

Finland's Border Patrol in the country's northernmost Lapland Region has tweeted a picture of a strange phenomenon. The image showed a huge land mass towering in the midst of frozen Lake Inari.

"A new island has emerged in front of Papinsaari. The Ivalo patrol has captured this phenomenon on the camera in a clear —25 C frost", the Lapland Border Guard tweeted.

​The Nordic country of Finland isn't exactly known for earthquakes or volcanic activities that could explain the sudden change of landscape or appearance of new rock formations.

While the phenomenon dubbed "ghost island" caused a stir in Finnish social media, users were quick to offer their solutions to the riddle, ranging from "glitch in the matrix" to "photoshop". Others, however, pointed out soberly that there never was any island and that the phenomenon was a mere mirage.

The image of the "island" was caused by light passing through atmospheric layers, which reflects and refracts distant landscapes in different ways, often confusing for the naked eye and optical lens alike.

If the air is all the same temperature, be it cold or hot, light travels through it in a straight line. However, if a steady temperature gradient exists light will follow a curved path toward the cooler air.

Mirages are therefore a direct result of light particles, the photons, taking the path of minimum time in vertical temperature gradients. While mirages more often appear in still air on a hot, sunny day over a flat surface (such as a desert) that will absorb the sun's energy, winter mirages are not uncommon, as witnessed by Finland's "new island".

Alas, the "ghost island" gave no territorial gains to the Nordic country that has about 180,000 lakes and almost as many islands.

Lake Inari is Finland's third-largest and is located in the northern part of Lapland, north of the Arctic Circle.