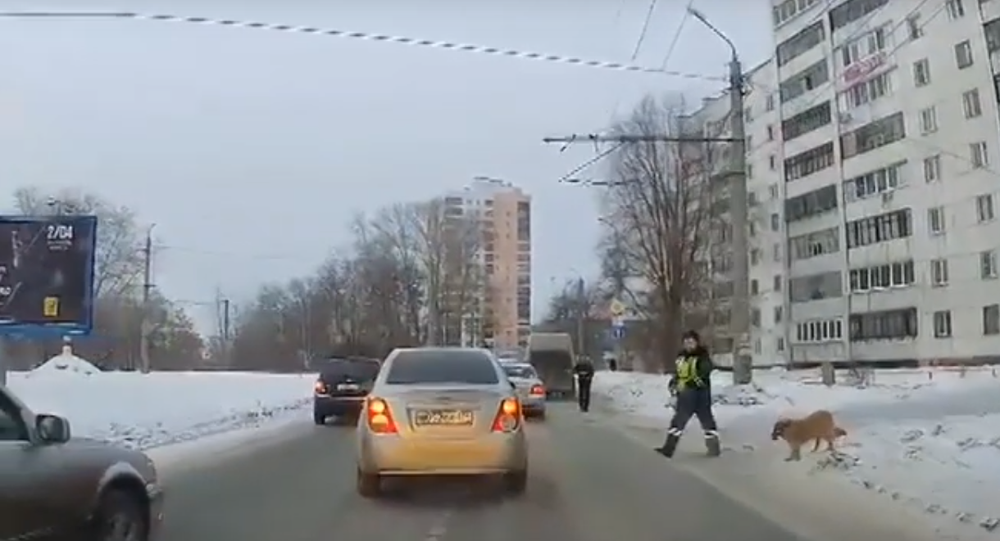 The act of kindness led to an upsurge of good feeling on Twitter, with users suggesting the world would be a better place if more people treated animals like the police officer.

A resident of Chelyabinsk, a Russian city situated just to the east of the Ural Mountains, has posted dash cam footage of a traffic cop stopping traffic on a snow-covered road to allow a limping dog to make its way across.

The footage shows the dog waiting patiently along the side of the road amid heavy traffic, with the officer stepping out of his vehicle and approaching the animal, before stepping out onto the road, stopping traffic with his baton and waving the dog on through.

"Chelyabinsk isn't so harsh," a user named Andrei quipped in a post accompanying the video.

The public relations department of the city's traffic police told a local news portal that they did not see anything unusual in the officer's deed, saying his intervention may have saved the dog's life and prevented a traffic accident.

The video has since spread like wildfire across the Russian internet, accumulating tens of thousands of views and shares on social media.

Users praised the officer, saying he was a "fine fellow," and writing that "the world was not without good people" after all. "Very touching and sincere, well done!" another user wrote.

The video even made it to Mashable, allowing it to spread to the English-language section of the internet.

Dog waits patiently until someone stops traffic so it can cross the street https://t.co/LsbH4ARo2M

As a major heavy industrial city along the Urals, Chelyabinsk has a reputation for being a particularly tough place both in Russia and abroad. In 2013, the city's residents shot to global fame after a meteor zoomed over the city. Multiple dashcam videos of residents' nonchalant reactions to the incident quickly spread online, turning into meme material.

Lone Rider: Hilarious Dog Climbs Up on Pony for a Midnight Journey

Back to the Drawing Board? ‘Automatic Dog Petter’ Leaves Pups Unimpressed

'Choked Like A Dog': Trump Derides Scandal-Ridden Northam As He Steamrolls Dems