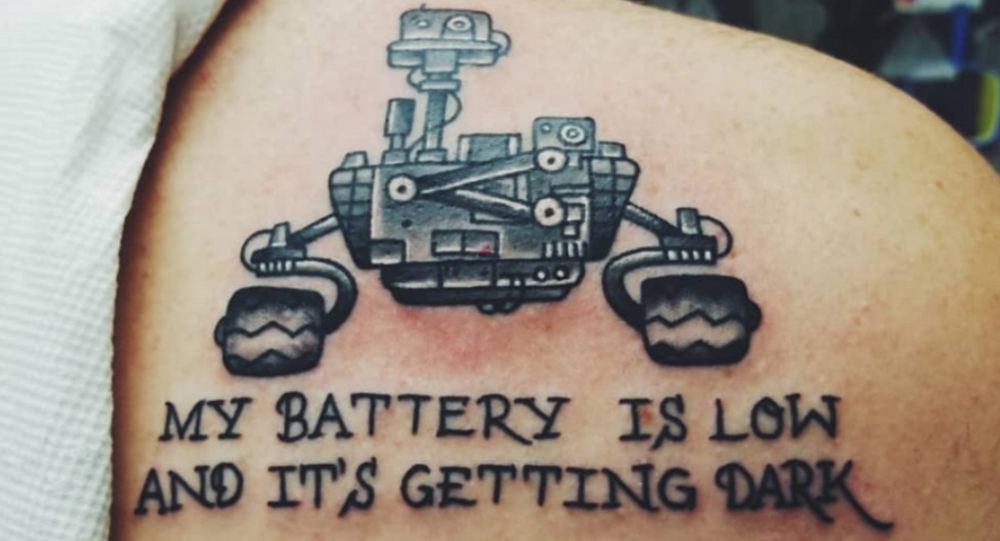 Netizens’ backlash comes after NASA last week declared that the mission of its Opportunity rover on Mars is to be ended after the rover failed to respond to more than 1,000 wake-up commands.

Twitter users didn't hesitate to post sarcastic comments in response to a tweet by author Charles Finch from Chicago, showing a photo with an alleged tattoo of NASA’s Opportunity rover. It's unclear who exactly got the body ink done.

Finch’s tweet was published after NASA announced last week the end of its Opportunity Mars Rover mission, with science reporter Jacob Margolis claiming that the last message the scientists received from Opportunity effectively translated to “My battery is low and it's getting dark”.

The same words are seen below the tattoo, which netizens recalled actually shows Curiosity, another of NASA’s rovers on Mars which successfully continues to operate on the planet.

“How do we tell him he got the wrong tattoo? I feel bad just looking at it," one user tweeted, echoed by many others who mocked the mistake.

Sssssh 🤫 don’t tell him he got Curiosity instead of Opportunity …

An even bigger problem — the rover shown on the tat is Curiosity, not Opportunity. #fail

Should we tell him?

I admire the sentiment, but wow… they look nothing alike.

This is the space geek version of folks who get a Chinese/Japanese kanji or Korean hanja tat without researching the proper translation… pic.twitter.com/HnWZYtsioo

How do we tell him he got the wrong tattoo? I feel bad just looking at it.

Some, however, gave kudos to what they described as an “awesome” tattoo, also calling it “a magnificent tribute”.

To everyone saying this person got the rover wrong, they were simply ahead of the curve as one day @MarsCuriosity will also have its batteries run low and it shall drift into its long night.

One user went as far as to say that the artist behind the tattoo was "simply ahead of the curve as one day @MarsCuriosity will also have its batteries run low and it shall drift into its long night”.

The Opportunity rover mission was declared complete last Wednesday after the rover did not respond to more than 1,000 wake-up commands.