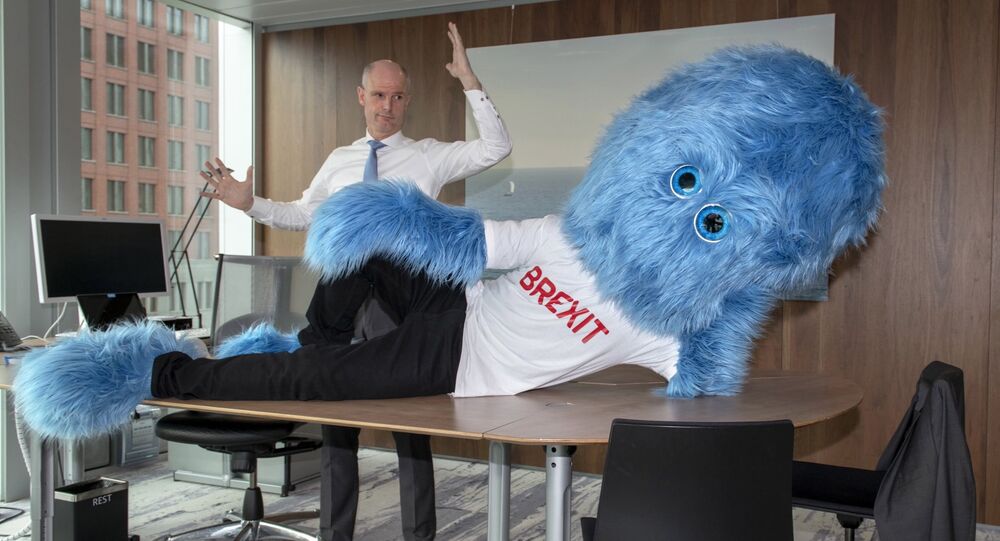 The Dutch official tweeted the image to his followers a Valentine's Day message of epic proportions, with a blue-haired, fluffy-faced version of Brexit lying on his office desk, with a heartfelt message on Valentine's Day.

Dutch foreign minister Stef Blok decided to poke a bit of fun at the big bad Brexit beast by staging a photo shoot with a giant Muppet-style monster.

"Make sure Brexit doesn't sit — or lie — in your way", the cheeky minister tweeted in his photo bomb. He also included a link to an official website where Dutch firms can asses the impact of Brexit on their operations.

​The shaggy monster, which resembles a blue Royal bearskin hat with eyes, became an instant overnight success on Twitter, with many commenting on Mr. Blok and the Brexit pom-pom.

Europeans on both sides of the Channel are worried that a worst-case Brexit scenario, often called a 'hard' or 'no-deal' Brexit, will undermine business dealings with the Netherlands, who is a top trading partner with the UK. Dutch hospitals have also warned about medical supply shortages in the wake of a no-deal scenario.

The news comes after Dutch prime minister Mark Rutte said in a Financial Times interview that the UK was a "diminished" country after voting for Brexit on 23 June 2018, adding that a no-deal scenario would cause "devastating" and "insurmountable" problems for the British economy.

Rutte added that "the ball is rolling towards the Dover cliff and we are shouting 'Stop the ball from rolling any further' but nobody is doing anything at the moment, at least not on the UK side".

But the Dutch economy has gained from roughly $328m in investments last year as 42 firms moved operations to Dutch cities like Amsterdam and Rotterdam in order to keep access to the common market, and the Dutch government has attempted to court Japanese electriconics manufacturers Panasonic and Sony to relocate operations to the Netherlands.

The UK is closer to a no-deal Brexit scenario after the Westminster voted down an amendment proposing to delay triggering Article 50 by three months. The motion was defeated 315 to 93 in yet another major defeat for UK Prime Minister Theresa May's Brexit deal, in addition to voting down a motion 303 to 105 to reaffirm support for the Prime Minister's plan to seek changes for her deal.

UK 'Waning' Nation, 'Too Small' to Stand on Its Own – Dutch PM on Brexit