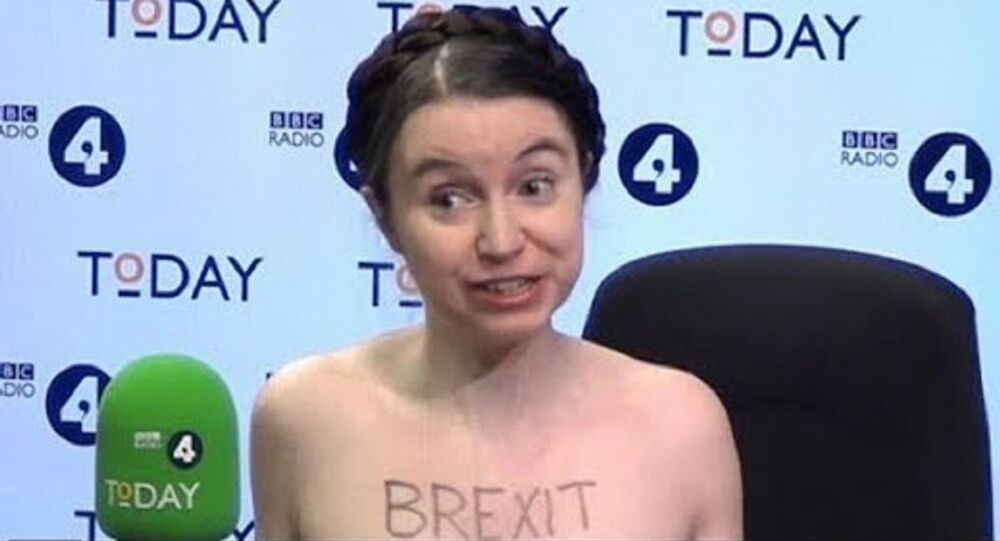 The UK's imminent departure from the European Union next month has accentuated divisions in British society, with remainers coming up with some desperate and, ahem, 'eye-catching' methods to bring attention to their cause.

'I invite Jacob Rees-Mogg to a naked debate about Brexit!' 🗣️

Inviting ardent pro-Brexit lawmaker Jacob Rees-Mogg for a "naked debate" on quitting the EU, Bateman cheekily said Brexit would leave the UK's economy "exposed." She also claimed that the pro-Brexit movement had exposed two "worrying" trends — anti-immigration sentiments in British society, and "past government failures" which helped lead to the feeling by many that they have "nothing to lose from Brexit."

The professor received a dressing down from Radio 4's host, John Humphrys, who told her, with all due respect, that "those are all arguments that have been put many times by very many people wearing their clothes." "Isn't it just exhibitionism?" Humphrys asked.

"What I'm suggesting to you is that taking off your clothes is a way to attract attention, but that's all it is, isn't it?" Humphrys continued. "If anything, the danger is that it will have the opposite effect, won't it?"

The media should not be flattering this individual. She quite clearly needs help.

Some users joked about the situation, with UK Independence Party leader Gerard Batten quipping that Dr. Bateman "may have boobed" with her strategy in delivering an anti-Brexit message.

I think she may have boobed.

She's exposed herself as bonkers

Planning on doing the same myself. Going to do a full frontal on twitch and declare ‘Brexit is a load of bollocks’

Others defended Bateman, however, accusing Humphrys of being "patronising" and "condescending."

The perfect example of why he needs to go. He is patronising, condesending and to ignoring what Victoria is saying as if she had no right to say it.She is Dr Victoria Bateman, Cambridge professer,had David Cameron spoken to her before it he would not have called the referrendum

So Humphreys accuses her of exhibitionism & some twitterers below gleefully comment on the aesthetics of Dr Bateman's body or her mental health, not the value of her analysis or even the exasperation many feel at the #Brexitfuckup and incompetence of govt. Wow.

Some went after the BBC, saying this was not a real issue.

Bateman herself responded to some of the criticism, saying that she wouldn't be "bullied into covering up my message".  According to the professor, some people just "seem threatened by a body not under 'their' control — & by women who are comfortable & confident in their own skin!"

And why should it stop me? Never has before. It says more about the people hurling abuse & ridicule than it does about me. I *won't* be bullied into covering up my message that #Brexit is the #EmperorsNewClothes & that women should be free to do what they want with their own body https://t.co/KzT3prwjKG

Some people seem threatened by a body not under "their" control — & by women who are comfortable & confident in their own skin! I for one see no problem using my body to resist #Brexit — & to fight for vital freedoms. That's *far* more important than "protecting" my own modesty! https://t.co/GHv62wGGBV

But the tweets only led to fresh attacks from critics.

I have tried, but fail to understand why being naked is helpful to resisting brexit?

The UK is due to leave the EU on March 29. Lawmakers have yet to approve the withdrawal deal, with the Irish border issue remaining the big stumbling block. Both London and Brussels are concerned about the possibility of a 'no-deal' Brexit, which UK police fear would make Britain "less safe."

If It's No Deal Brexit We're Going to Make Money - Businessman