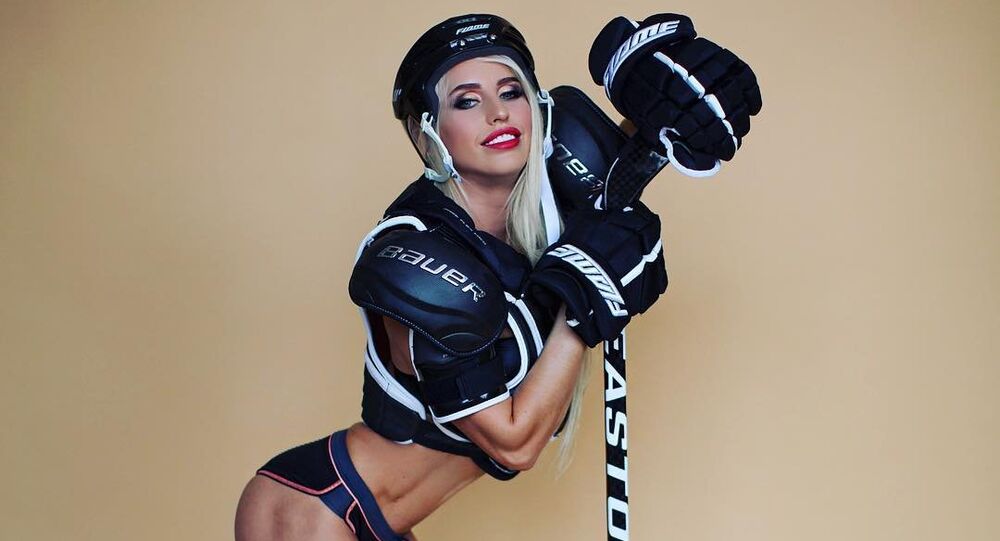 Presenter and fitness babe Yulia Ushakova, who hosts a show on the Russian ice hockey club Spartak’s YouTube channel, landed in hot water after her employer posted a picture of her lying in skimpy panties on a treatment table on their social media, prompting uproar among commenters.

An unofficial face of Russian ice hockey giant Spartak and aspiring Instagrammer Yulia Ushakova has defended her sexy photo shoots, saying that they are all aimed at attracting the attention of social media followers and ice hockey fans, who will associate her with the team.

The former bodybuilder, who has a Master of Sports in body fitness degree, and who is used to delighting her half a million Instagram base with cheeky photos, told RT Sport that she does not mind excessive media attention like what she stirred with her October 2018 session.
This autumn, her employer, HC Spartak, triggered a social media storm with a photo of Ushakova lying on a treatment table with a bandaged ankle. Some social media users slammed the picture for alleged sexism, while others lambasted the woman for being “complicit”.

​However, that did not seem to discourage the sporty presenter. According to her, such photo sessions are able to attract more people to stadiums and make sports more popular.

“If media react to this photo shoot as they did last time I will only be happy. I wish the press would pay more attention to sport-related things rather than concentrating on show business bulls**t”, she said.

In the interview, she insisted that such football and hockey-themed photo shoots are aesthetic and beautiful. She referred to them as “bright, eye-catching and quite decent, without any vulgar implication” and pointed out that “no private parts can be seen in the pictures”. However, not all of them are sports-themed, as sometimes the 28-year-old lets followers see her more romantic and less athletic side.

Lucky fans can meet the blond beauty in person, as the Spartak ambassador can often be spotted by stands at the stadium wearing raunchy dresses in the club’s colours.