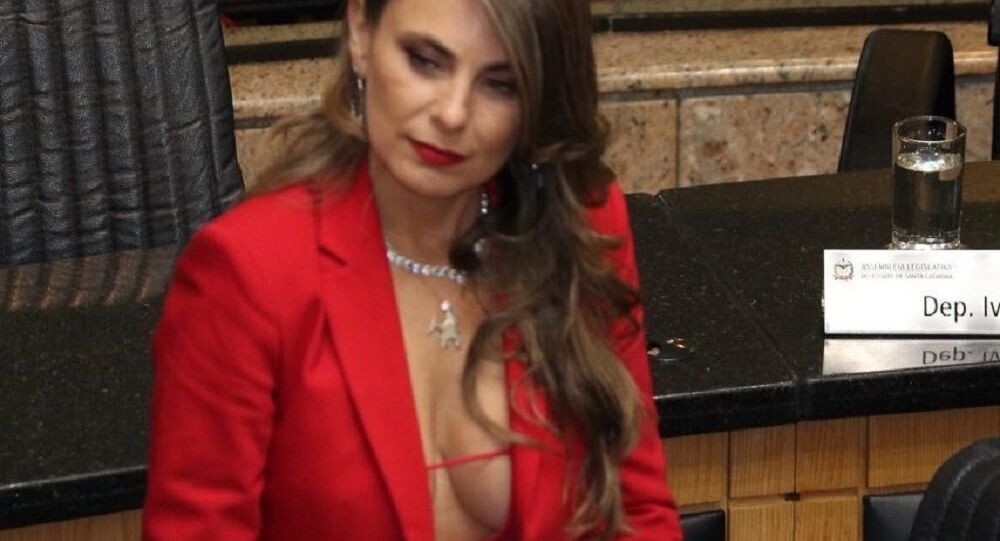 Ana Paula da Silva, a new Brazilian lawmaker, made a splash on the internet after appearing in a somewhat risqué outfit, at the swearing-in ceremony.

Ana Paula da Silva, who used to serve as the mayor of Bombinhas, was elected state representative to the Brazilian state of Santa Catarina’s Legislative Assembly on 7 October 2018.

While taking the oath a few days ago, she chose a raunchy red outfit and a matching top, exposing her cleavage to the public, and became the talk of the town.

While Brazilian media criticised the 43-year-old bombshell, known locally as Paulinha, for putting her assets on display, Reddit users appeared to be mesmerised by her looks and suggested that it's her work that is of a paramount importance rather than her fashion choice:

"This woman is proof of 'I don’t care what you look like, how you dress, or what you do on your spare time. Just so long as you get sh*t done'", user PsychoticDreams47 penned.

One Reddit user weighed in: "She’s stunning", while another wrote: "Hey Siri, how do I move to Brazil?"

© Sputnik / Asatur Yesayants
Sexy Beauty: Ten Hottest Russian Women of 2018 Named
10
Some, however, poked fun at the outfit, leaving comments such as: "Sworn into the Big Tittie Committee" and "Her outfit is the stuff of my nightmares. I’m walking into an important meeting, look down and 'OMG! I put on a skirt and jacket with no blouse!' Heart attack, wake up, cold sweat…"

Reacting to the worldwide attention, Paulinha took to Instagram to clarify the choice of attire, having written: "This is some information from my story, for those who do not know me… I love to dress up, which, in turn, has nothing to do with my work. I'm not going to change my lifestyle, because now I have become a lawmaker".

Paulinha also said on Monday that her team had made copies of the trolling and offensive comments and would file them as part of a lawsuit to bring the bullies to justice.

Speaking with local network NCS TV, she said: "I thought people were going to talk about the red, but they just focused on the cleavage… the way I dress is my problem. Women have breasts and I have big breasts, I’ve always been like that. The message has been given. Women are in politics and society has to get used to it. There are much more important issues for the Legislative Assembly to discuss".