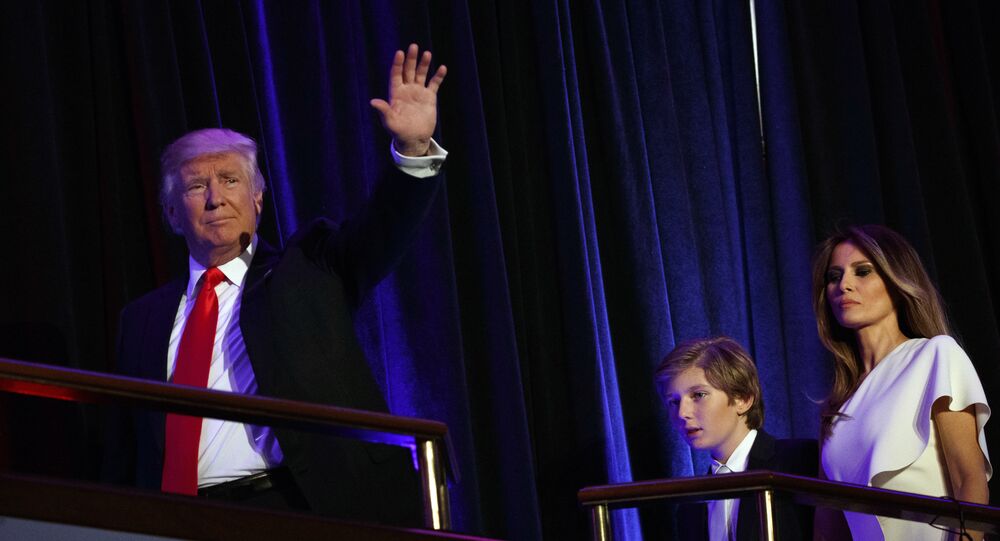 Trump Comments on Son's Chances in Football, Gets Tackled by Twitter Trolls

The president's seemingly inoffensive remarks, made ahead of Sunday's Super Bowl LIII, brought out visceral hate on social media from his detractors, passionate defence from his supporters, and confused quiet from those on the sidelines.

"I just don't like the reports that I see coming out having to do with football…I mean, it's a dangerous sport and I think it's really tough," Trump said.

"I think the NFL is a great product, but I really think that as far as my son – well I've heard NFL players saying they wouldn't let their sons play football. So it's not totally unique, but I would have a hard time with it," the president added.

© AP Photo
An Overhyped Bore: Five Reasons Why Superbowl Sunday Sucks
According to Trump Barron quite enjoys soccer, which he said was "moving forward rapidly" in the US.

The remarks instantly brought out the trolls, jokers and partisan hacks on both sides, with Twitter users instantly recalling seemingly everything the president has ever said on the subject of football, including the national anthem kneeling scandal which rocked the NFL as players protested police brutality and racism.

But Trump once decried the softening of the NFL, claiming, "Today, if you hit too hard: 15 yards! Throw him out of the game!… They're ruining the game!"https://t.co/PviCAPv4MI

And yet 18 months ago he said the NFL was being ruined by rules limiting brain injuries. So, for Drumpf, it's a sport that could use more cracked skulls, but not Barron's. pic.twitter.com/efwPMg0Zsa

Today Trump said he doesn't want his son Barron playing football. But, when he was a presidential candidate, he raved about the brutality of the sport https://t.co/JBsFv4QEJX pic.twitter.com/OYRXYxFUaU

Chronic Traumatic Encephalopathy from repetitive head injury is a real problem in football. Trump’s caution for his son Barron playing the sport is the first time he’s shown real empathy. Wish he had the same empathy for the black players who took a knee to fight white supremacy.

Some users also recalled Trump's bone spurs, which allowed the president to avoid the draft during the Vietnam War, suggesting Barron may have inherited the condition.

I guess bone spurs runs in the family…. https://t.co/YlZXf0jeOk

Others accused the CBS journalist of asking ridiculous questions, attacked Trump critics for going after a child, or praised the president for the concern he showed for his kid.

Face the nation. Asking the tough questions that America really wants to hear. NOT

You have a limited and rare sit down with POTUS and this, THIS, is what you ask about?

Grow up! Picking on a 12 year old no matter who the parents, is shameful!! @ChelseaClinton & @JennaBushHager would tell you the same thing! pic.twitter.com/foReGW7JRw

Let's not dogpile on the kid, eh? The adults are fair game; leave the kids out of it.

It wasn't OK when folks went after Sasha and Malia, it's not ok to go after Barron.

After 2 concussions, a destroyed back, and both knees always in pain from injuries yeah I would prefer my kid didn’t play as well. At 27 my body is destroyed. Play anything else. Still love football and would let my kid play but I would prefer no.

As ill-timed as the comment may be, it's about the most caring and thoughtful thing he's been caught saying about his youngest child since his election. Most of the time, you wouldn't even know he had a young son.