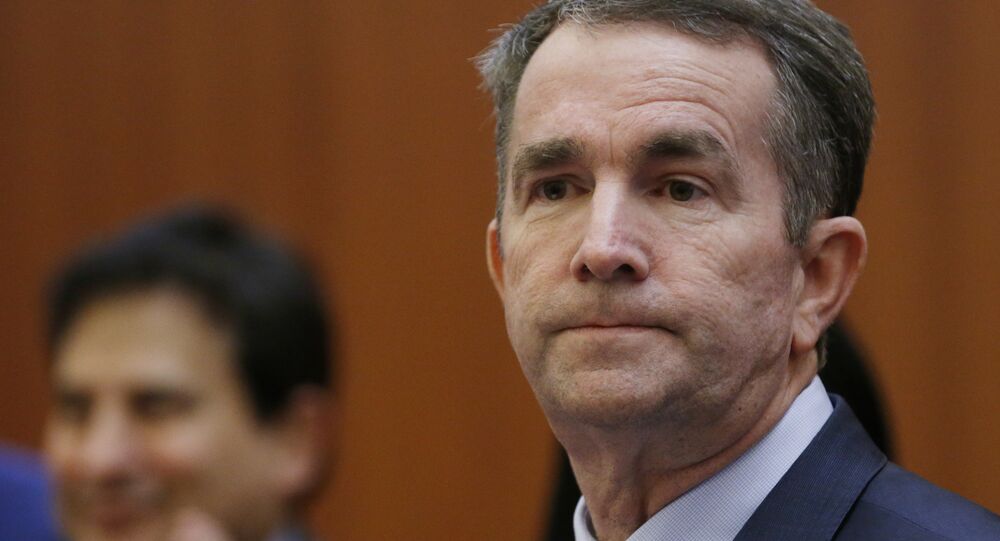 Photos have emerged from Democratic Virginia Governor Ralph Northam’s 1984 medical school yearbook in which he is named in a photo of two people, one of whom is wearing blackface and the other wearing a Ku Klux Klan hood and robes.

A copy of the page for Ralph Shearer Northam from the 1984 Eastern Virginia Medical School yearbook shows a couple of scenes from his school life: a quote about drinking beer, sitting by a sports car, wearing a cowboy hat outdoors and oh — dressing in racist costumes.

BREAKING: Multiple publications have confirmed that a picture has emerged of Virginia Democrat Governor Ralph Northam appearing in a KKK and blackface photo in his 1984 yearbook at Eastern Virginia Medical School pic.twitter.com/PigroV4lsB

​Big League Politics first reported the photo's existence on Friday. It's not immediately obvious which costume is Northam's. In an apology statement Friday evening, Northam failed to identify himself.

"Earlier today, a website published a photograph of me from my 1984 medical school yearbook in a costume that is clearly racist and offensive. I am deeply sorry for the decision I made to appear as I did in this photo and for the hurt that decision caused then and now," Northam said in the statement.

"This behavior is not in keeping with who I am today and the values I have fought for throughout my career in the military, in medicine, and in public service," the governor continued. "But I want to be clear, I understand how this decision shakes Virginians' faith in that commitment."

"I recognize that it will take time and serious effort to heal the damage this conduct has caused. I am ready to do that important work. The first step is to offer my sincerest apology and to state my absolute commitment to living up to the expectations Virginians set for me when they elected me to be their Governor," he said.

The Washington Post reported that most politicos they sought comment from were rather speechless at the news. Northam campaigned hard for the African-American vote in Virginia and came out unequivocally against the violence and veneration of Confederate monuments on display in Charlottesville in August 2017, which happened in the heat of the gubernatorial race.

However, Jack Wilson, chairman of the Republican Party of Virginia, said in a Friday statement that "Racism has no place in Virginia," adding, "If Governor Northam appeared in blackface or dressed in a KKK robe, he should resign immediately."

Virginia House of Delegates speaker M. Kirkland Cox and Virginia Senate Majority Leader Thomas K Norment, both Republicans, also released a statement saying, "This is a deeply disturbing and offensive photograph in need of an immediate explanation by the Governor."

However, Northam is not without allies.

"His whole life has been about exactly the opposite, and that's what you need to examine, not something that occurred 30 years ago," said Virginia Senate Minority Leader Richard L. Saslaw. "While it's in very poor taste, I would think no one in the General Assembly who would like their college conduct examined. I would hate to have to go back and examine my two years in the Army. Trust me. I was 18 years old, and I was a handful, OK? His life since then has been anything but. It's been a life of helping people, and many times for free."

"He's my friend, and I will always stand up for him," said State Sen. Richard Stuart, a Republican who the Washington Post notes is one of Northam's closest friends.

Northam had previously graduated from the Virginia Military Institute and is from the small fishing village of Onancock, on Virginia's Eastern Shore.