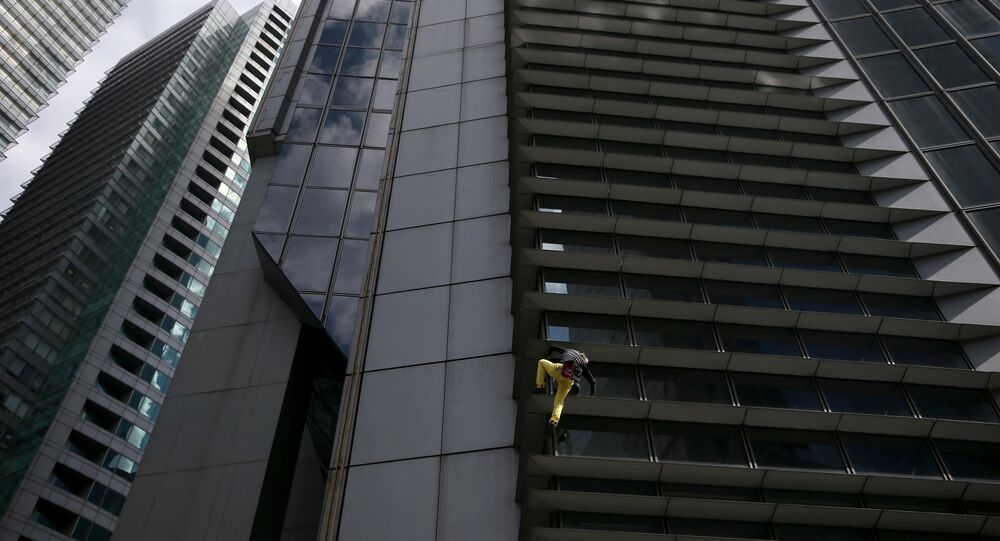 Famed French freeclimber Alain Robert’s most recent ascent ‒ up one of Manila’s tallest buildings ‒ provoked thrills among passers-by, as well as a police response that ended in a number of charges.

Robert, also known as the "French Spiderman," remains in Makati police custody in the Philippines on charges related to "alarms and scandal and other forms of trespass."

The French climber told PhilStar Global that he feared for his life when he was detained by "security personnel wearing blue and holding guns" after successfully ascending and descending the GT International Tower in Makati, Philippines.

YouTuber DENCO was able to capture the crowd and the unassisted descent of the "French Spiderman."

As expected from the size of the crowd, many angles of the stunt were recorded on the scene.

Speaking with PhilStar, Robert said initially chose the GT Tower because it appeared easy to climb and has an "interesting shape"

"I am not killing anybody. This is not bank robbery," the 56-year-old said in his own defense, adding that he was "just climbing the building."

Makati police, however, did not find the situation entertaining or a spectacle worth repeating.

"Because his climb, although he did not enter the building — he climbed, it's a private property. He does not have a permit, he lacks coordination. It's also a safety threat to everyone. He can also be charged with public disturbance," Makati Police Chief Senior Superintendent Rogelio Simon told reporters after Robert's detention.

Despite the arrest, Robert applauded the Makati police and how they handled the situation — specifically how authorities only closed one lane of traffic, as opposed to other countries that shut down up to eight lanes, according to PhilStar.

Alain Robert, now under the custody of Makati Police pic.twitter.com/Uw1XniBAkF

This is not the first time Robert has had a run-in with the law due to his urban climbing. Sputnik reported on the 56-year-old's October arrest and sentencing after he climbed the Salesforce Tower in London.

In June, the 5'5", 110-pound urban climber was also forbidden from finishing an attempt at climbing the 123-story Lotte World Tower in Seoul, South Korea, despite being halfway up the building, according to Channel News Asia.

Despite his lawlessness when it comes to climbing, he has successfully climbed a number of iconic buildings and skyscrapers such as the Eiffel Tower, the Sydney Opera House, the Petronas Twin Towers and the Burj Khalifa in Dubai, according to his personal website.

Robert also holds the 2012 Guinness World Record for the "fastest time to climb the Aspire Tower unassisted," as well as the record for "most buildings climbed unassisted."

Though the 56-year-old has had his number of severe falls (with himself estimating accidents have left him 66 percent disabled) and arrests, the urban climber revealed Tuesday to reporters that he has his sights on a couple of climbs in Chile and Panama in the near future. That is, after he posts bail Wednesday.