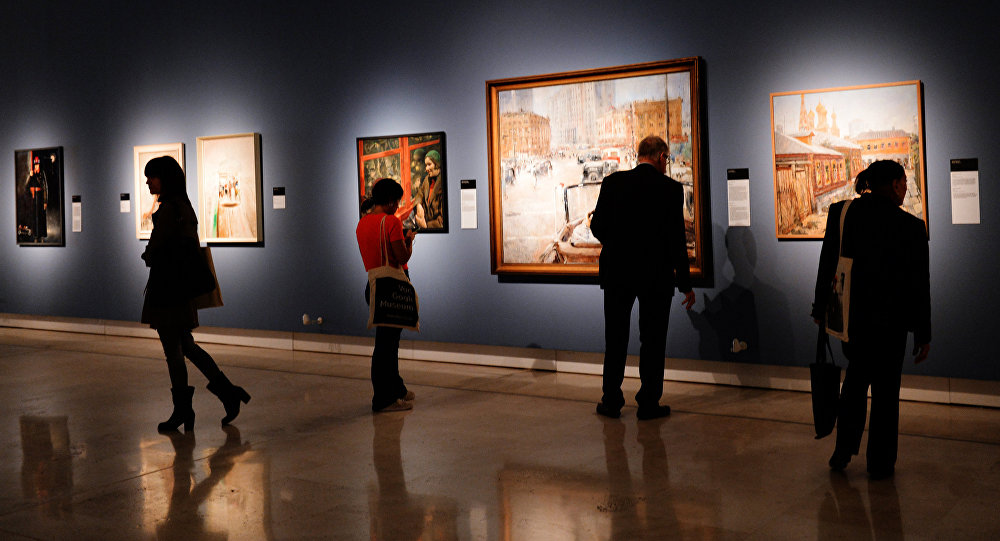 The painting, depicting the Ai-Petri peak in the Crimean mountains was lifted off the wall on Sunday. Following the theft, the police recovered the artwork in the Odintsovsky District, southwest of Moscow on Monday, after they detained a 31-year-old theft suspect. Preliminary data showed that the crime was committed with financial motives. The suspect now faces up to 15 years in prison. 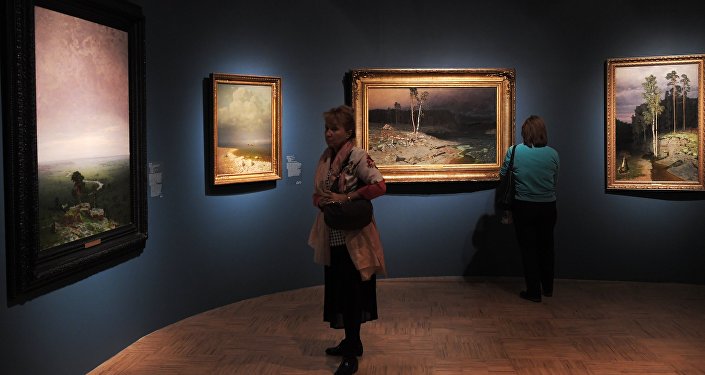 © Sputnik / Vladimir Vyatkin
Kuindzhi's Painting of Crimean Sights Stolen From Tretyakov Gallery in Moscow
Vladislav Kononov, the head of the museum department of the Russian Ministry of Culture, said that the painting, on loan from the State Russian Museum of St. Petersburg for the Kuindzhi exhibition, could be returned to the museum later on Monday.

Commenting on the outrageous incident, the Russian presidential spokesman Dmitry Peskov said some conclusions regarding the safety of paintings in Russian museums will likely be drawn following this case.

It is noteworthy that the painting was stolen from the exhibition in spite of the fact that the Tretyakov Gallery has three levels of security.

"This is, in fact, an unprecedented story. We have tree levels of security at leading museums, at all museums, in fact. I cannot understand how this could have happened. We will, of course, conduct the most thorough and detailed investigation into this unprecedented incident," Kononov said.

According to Kononov, it seems as if the thieves were acting according to the scenario of the 1972 Soviet film "Grandads-Robbers," in which two men steal a painting by Rembrandt.

"To tell you the truth, I cannot recall another case of such a brazen theft. Everyone compares it to [the scenario of] the Grandads-Robbers movie. I get the impression that the thieves were preparing [the crime] using the scenario of this film," Kononov told Sputnik.

Search for the Culprit

Sputnik received the initial information about the incident from a source who confirmed the vanishing of Kuindzhi’s painting. According to spokeswoman for the Russian Interior Ministry Irina Volk, security guards from one of the museums of the Russian capital contacted the police saying that security cameras showed unidentified individuals taking the painting off the wall at the Tretyakov Gallery in plain sight of numerous visitors and fleeing the scene. 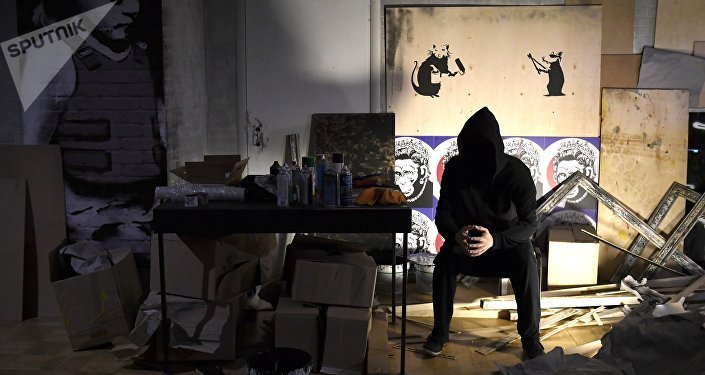 © Sputnik / Sergey Pyatakov
'Piece of Art History': Buyer to Keep $1 Mln Banksy Painting That Shredded Itself at Auction
At the same time, the police were searching all the visitors at the exit from the gallery, with two police cars having arrived at the scene. Members of the Russian National Guard (Rosgvardia) were also inside the gallery. After that, its spokesman Valery Gribakin told Sputnik that the security guards of the Tretyakov Gallery were actually protecting the museum from all types of threats themselves.

Reacting to the recent theft, the Tretyakov Gallery confirmed that it had increased security measures at Kuindzhi’s and other exhibitions of the museum, as according to the press service of the gallery, Rosgvardia members and the security guard of the museum were operating in normal mode during the theft.

In a meantime, the gallery had launched its own internal investigation into the incident, according to Kononow, while a law enforcement source told Sputnik that police had questioned the gallery’s employees in connection with the theft.

The incident didn't go unnoticed by Russian Culture Minister Vladimir Medinsky who told Sputnik that the ministry was in close contact with the law enforcement agencies investigating the theft.

Kononov told the Rossiya 24 TV channel following the incident that Kuindzhi’s painting had been added to the register of stolen items to prevent the artwork from being smuggled out of Russia.

Facebook/bataclan
Banksy Painting Stolen From Site of Paris Theatre Massacre
The Russian Museum confirmed that the painting was insured, without specifying the cost. According to the Russian Culture Ministry, "the insurance value of the painting is 12 million rubles [roughly $182,000]."

According to the information on Russia’s public procurement website, 161 items of Kuindzhi’s temporary exhibition at the Tretyakov Gallery of a total value of 3.2 billion rubles and $15 million had been insured at the Yakut insurance company Sterkh.

Expert Elena Titova told Sputnik that security standards at museums did not require an alarm system to be installed for each painting.

The issue of security system has also been addressed by vice-president of the Russian Academy of Arts, Andrei Zolotov, who stressed in a comment to Sputnik that there was a need to improve it security system at museums.

In the meantime, the head of the Russian auction house Litfond, Sergei Burmistrov, suggested that the auction price for Kuindzhi’s work "Ai-Petri. Crimea" could range from $800,000 to $1-2 million.