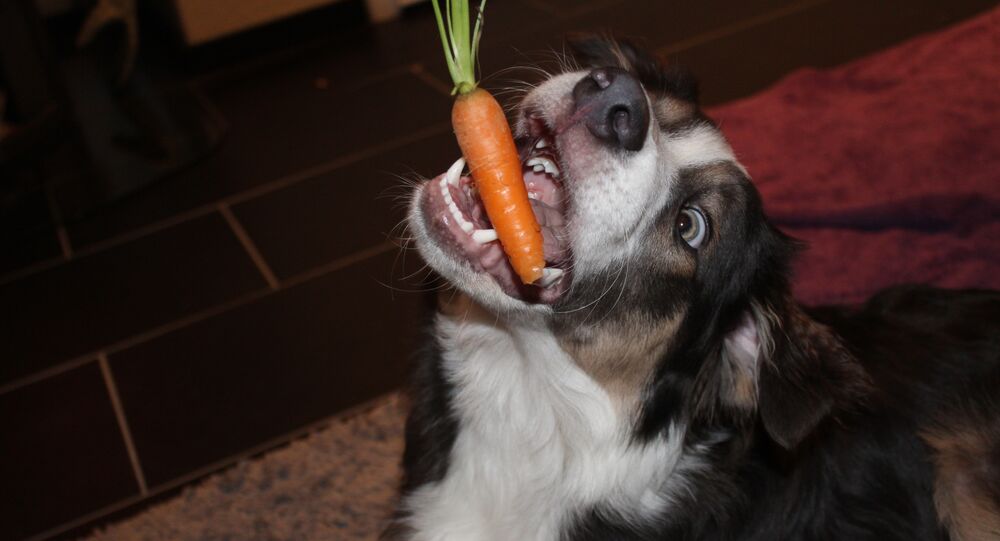 Sweden's TV4 has sparked outrage with its segment on dogs' carbon footprint, in which vegetarian food for pets was proposed as a "climate-smart" alternative. On social media, sharp-tongued Swedes retorted by proposing a gradual extermination of all predators and omnivores as a more drastic solution.

Since Sweden is known for its high level of environmental awareness, conscientious vegetarianism as the most eco-friendly diet has become increasingly popular in recent years. However, the recent push to extend the meat-free diet to dogs, so far dedicated carnivores, didn't hit home with the more traditional part of the Swedish population, which doesn't follow the latest gastronomic trends.

"We humans can choose to eat less meat or quit it altogether, but what about our pets?" Swedish TV4 asked in its morning programme, addressing the climate impact of animal food. "Is your dog a polluter?" the text enquired.

Sigrid Agenäs, a professor at the department of animal rearing at the Swedish Agricultural University, argued that a vegetarian diet was perfectly fine for healthy adult dogs, provided that they get all the necessary supplements. This was called "climate-smart eating".

Earlier this week, Swedish Radio ran a program about carnivorous pets' carbon footprint, given the increasing number of dogs and cats throughout the world.

As of today, the meat-heavy BARF diet (biologically adapted raw food) is a trendy option. According to Swedish Radio, it contains a very high proportion of high-quality meat and is therefore the least eco-friendly diet. According to a 2017 study, cats and dogs account for a staggering 25 percent of all meat consumed in the US. Swedish Radio then proceeded to tout insect-based feed for domestic pets, citing its "enormous" climate and dietary benefits. The main selling point is that insect rearing is much more resource-efficient than traditional cattle husbandry.

​Ordinary Swedes, however, weren't too enthusiastic about vegetarian and insect-based dog food.

"For real? Have you lost your marbles? Previously there were cows & their gases, and now its dog food that threatens the climate?" a user wrote on TV4's Facebook page, citing previous research that identified bovine flatulence as an environmental threat.

"When you switch on TV4 and are no longer sure whether you're living in a country or in a hash psychosis", MickeK tweeted about TV4.

Another user predicted that Sweden is about to implement an "environmental tax" on dogs and cats.

"Why not recommend that tigers and lions also become vegetarians?" another one quipped.

"If you really firmly believe eating meat is wrong, you should advocate the extermination of all predators (and all the omnivores except possibly humans). Gradual sterilisation is an option", was another witty suggestion.

"The dog's teeth say it all: a real vegan", was yet another smart reply.

In total, there are an estimated two million dogs and cats in Sweden and about two billion in the entire world.

About 10 percent of Swedes identify as vegetarian.