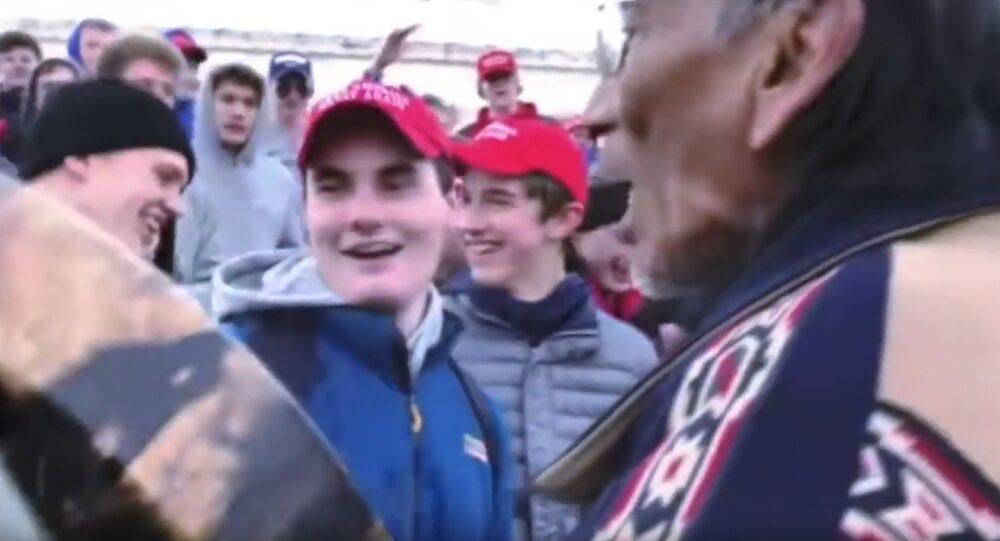 A group of white high-school students wearing MAGA hats and clothing were recorded in Washington DC surrounding and harassing a Native American US military veteran, jeering and mocking the man as he attempted to pay tribute to his fallen comrades.

The videos and photographs quickly went viral, and Americans were appalled at the behavior of the MAGA-clothed private-school students — who had been brought to the nation's capitol by their church leaders — as they mocked the elderly veteran.

MAGA-branded clothing and hats are typically worn by supporters of US President Donald Trump, and the ‘Make America Great Again' (MAGA) slogan is considered to be the most important catchphrase of the 45th US president's administration.

"When I was there singing, I heard them saying 'Build that wall, build that wall,'" Phillips recounted, with tears rolling down his cheeks, cited by The Washington Post.

"This is indigenous lands," the Vietnam Vet noted referring to the US-Mexico border, adding, "We're not supposed to have walls here. We never did."

Phillips detailed that, while being harrassed by the MAGA-branded students, his thoughts turned to his wife Shoshana, who had died four years previously after succumbing to bone marrow cancer.

He also acknowledged current threats against indigenous tribes around the world.

"I felt like the spirit was talking through me," Phillips said, cited by The Chicago Tribune.

Reaction to the video of the MAGA-wearing private-school students mocking and harassing the elder military veteran was decisive. Many observed that Trump's polarizing rhetoric on immigrants to the US has contributed to the current climate of racial abuse.

Others noted the unfortunate historical US precedent for racism.

US House Representative Deb Haaland (D-NM), a Native American and a professed Catholic, was at the DC rally earlier and tweeted sharp criticism for the "heartbreaking" show of "blatant hate, disrespect, and intolerance," according to the Chicago Tribune.

Haaland, pointed out that Trump has made it a habit to use Indian names, including Pocahontas, as insults toward political opponents.

"It is sad that we have a president who uses Native American women's names as racial slurs, and that's an example that these kids are clearly following, considering the fact that they had their 'Make America Great Again' [MAGA] hats on," Haaland noted.

"[Trump has] really brought out the worst in people," the lawmaker added.

A joint statement from the Covington Catholic High School and the Roman Catholic Diocese of Covington, Kentucky, was published by the Cincinnati Enquirer, apologizing to the native American elder.

Officials within the church group claimed that they would investigate and take "appropriate action, up to and including expulsion," cited by Cincinnati.com.

"We extend our deepest apologies to Mr. Phillips," the statement added.