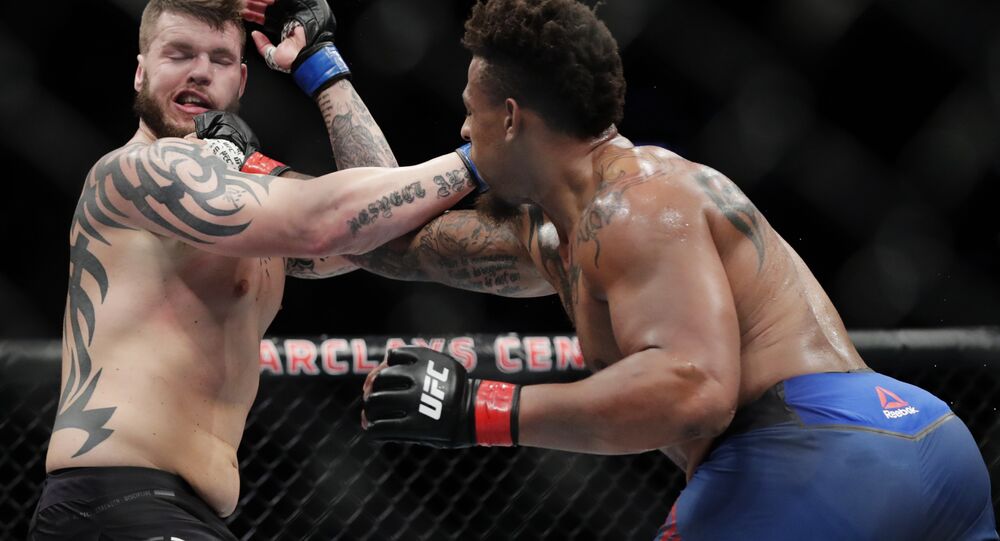 Hardy, a former NFL star whose career was derailed by a domestic violence conviction and drug arrest, did not think twice before apologising to the rival for his actions at a post-fight press conference. He insisted that the incident was the result of inexperience, not intentional cheating.

Ex-NFL icon Greg Hardy was disqualified during his debut heavyweight bout against opponent Allen Crowder at UFC Fight Night in Brooklyn for throwing an illegal knee to the head of his downed rival.

Referee Dan Miragliotta was quick to stop the fight and disqualify Hardy at the 2:28 mark of the second round when it became clear that Crowder was in no position to continue.

Former NFL DE Greg Hardy was disqualified from his UFC debut tonight for delivering an illegal knee to the face. pic.twitter.com/wweVKGbJUf

The crowd was infuriated over Hardy's actions and reportedly chanted "a**hole!" at him as he was leaving the octagon after the bout,which saw a disqualification victory for Crowder.

Notably, Hardy minced no words when he apologised to Crowder at the post-fight news conference, citing a lack of experience.

"He was getting up, it was inexperience in mistiming it, man. But I trying to time it like I had just watched Donald Cowboy Cerrone do, like I saw everybody else do, and I thought it was the right thing to do at the time. And it was not. I messed up", Hardy said.

However, fans were not that sure when almost all of them lashed out at Hardy over his disqualification defeat.

It's not rocket science Greg Hardy isn't fit to be in any sport….. period ‼️ The evidence was shown tonight 🤔

To think this was the right sport for him is outrageous

Greg Hardy kneeing a clearly downed opponent in the head and getting disqualified to the Brooklyn crowd chanting “asshole”… perfection. #UFCBrooklyn

Greg Hardy just kneed Allen Crowder when he was down. Of course this is how the fight ends. The crowd inside the Barclays are chanting, "a--hole., a--hole."#UFCBrooklyn

Hopefully, that’s the last we see of Greg Hardy in a #UFC octagon. Embarrassing.

Greg Hardy was disqualified for this illegal knee to the head. It’s Hardy’s first loss of his MMA career pic.twitter.com/qNc0F6Y4At

Earlier, Hardy was accused of domestic violence offenses, but the charges against him were dropped after his alleged victim refused to testify in the appeal.

Still, the incident prodded him to say farewell to his successful NFL career with the Dallas Cowboys, and turn to mixed martial arts.