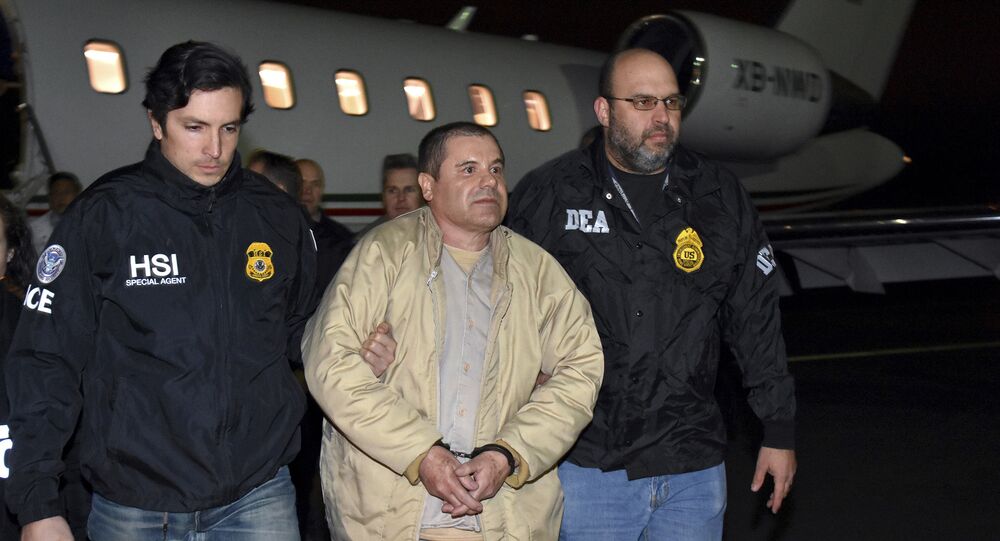 El Chapo Once Escaped Through Tunnel Under Bathtub While Naked, Mistress Says

The secret escape was prepared in advance, complete with a hydraulic system to lift the heavy bathtub and expose a trapdoor to the tunnel. The famous drug lord ran for his life, leaving his mistress and assistant behind.

During the hearings, Sanchez, 29, a former local politician from El Chapo's home state of Sinaloa, told the court the story of her relations with the drug lord, which began as the two conducted shady business.

© REUTERS / Larry Downing/Files
Inside the CIA's El Chapo Board Game
The story involved the pair chatting using encrypted mobile phones, secretly meeting in safe houses and, eventually, getting business mixed with pleasure, according to a Sky News report.

"Until this day, I'm confused because I thought we were in a romantic relationship," she said in the courtroom, where Emma Coronel Aispuro, El Chapo's wife, was also present.

According to Sanchez, she was afraid of the criminal, and even had to reassure him she would not "rat him out." In 2012, their relations started to deteriorate, but the two just could not part ways.

Then, in 2014, the drug lord invited her to a safehouse in the city of Culiacan, which she agreed to. El Chapo was aware that Mexican authorities had already dispatched a team of marines to hunt him down. As the two spent the night together, Guzman's assistant came in and warned them that "they are on us."

© REUTERS / Stringer
Chinese Court Sentences Canadian to Death Over Drug Trafficking Case
Sanchez told the court that Guzman then took her into the safehouse bathroom, where the bathtub was lifted with built-in hydraulics to expose a fortified trap door entrance to a sewage tunnel, which led to a remote part of the city.

Guzman — still naked — took off running, Sanchez told the court, leaving her and the assistant behind.

"He left us behind," she said.

Sanchez said she lost El Chapo in the tunnel and wandered in the sewers "long enough to be traumatised."

Shortly after the escape, the drug lord was apprehended by authorities at a hotel in the resort town of Mazatlan, along with his wife and two daughters.

El Chapo is famous for his two spectacular prison escapes in Mexico, with one in 2015 involving a mile-long tunnel that had been dug to his cell.

He was finally extradited to the US in 2017 to face charges of trafficking cocaine, heroin and other drugs as head of Mexico's Sinaloa Cartel.