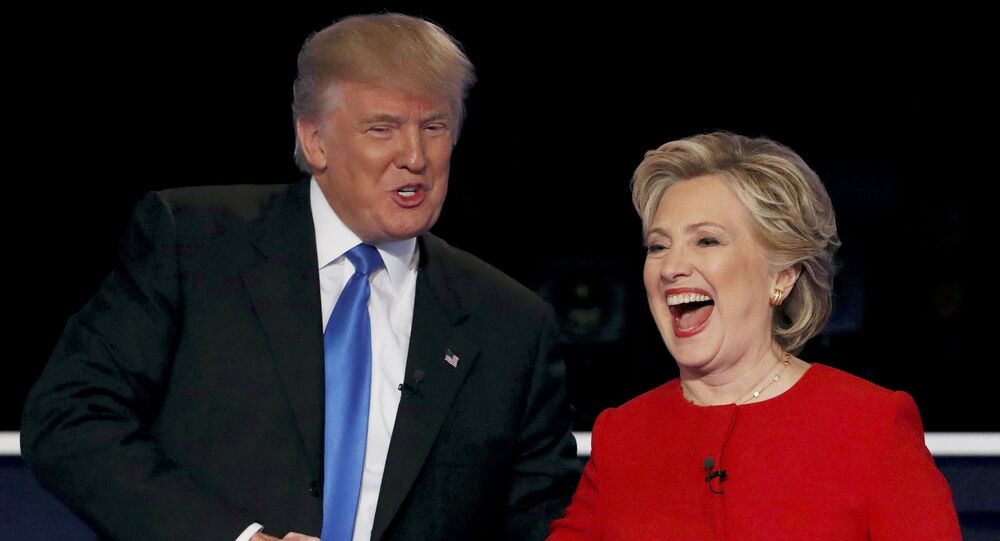 Hillary Clinton’s flashback tweet comes after news reports that the FBI launched an investigation in 2017 into whether President Donald Trump had been secretly working on behalf of Russia.

The former Democratic candidate tweeted a clip from a 2016 presidential debate in which she called her Republican bête noire, Donald Trump, the “puppet” of Russian President Vladimir Putin.

During the 19 October 2016 debate, Trump claimed that Putin “has no respect” for Clinton, while the former secretary of state hit back by saying “Well, that’s because he’d rather have a puppet as president of the United States”.

As Trump quickly interrupted her, striking back with a “no puppet” line, calling Clinton the puppet instead, the Democratic nominee went on with her verbal assault:

“It’s pretty clear you won’t admit the Russians have engaged in cyber attacks against the United States of America, that you encouraged espionage against our people, that you are willing to spout the Putin line, sign up for his wish list, break up NATO, do whatever he wants to do and that you continue to get help from him because he has a very clear favourite in this race”, Clinton said.

Social media users have been divided over the “told you so” remark, with some ridiculing her words and suggesting that she just can’t get over her loss to Trump:

Facts please @HillaryClinton and evidence. Not the fake dossier you and the @DNC paid for.

Good Lord is she still crying

I hated how Trump, as Secretary of State, gave Russia 20% of our uranium for a $13 million bribe. Oh wait. That was Hillary.

Crooked Hillary needs to press that "reset" button again. Except, this time, in reverse. Maybe memory is her problem now.

Many others, however, stood by her side:

You are absolutely right, and I was so wrong about you.

Clinton’s tweet follows a Friday article by The New York Times suggesting that the FBI opened a probe in 2017 into whether Trump had been covertly working on behalf of Russia.

The NYT’s piece, in turn, was published a day after The Washington Post reported that Trump had “gone to extraordinary lengths” to conceal details of his personal interactions with the Russian president.

© Sputnik / Alexei Nikolsky
'Did Obama, Clinton Ever Disclose Details?' Interpreter Ethics Back in Spotlight as Trump Slammed for 'Secret' Putin Talks
When asked about the reports by Fox News’ Jeanine Pirro, Trump denied having ever worked for the Russian government and described it as “the most insulting thing I’ve ever been asked”.

Trump also said that he wasn’t “keeping anything under wraps” and that he would be happy to share the details of his encounter with Putin.

In her book “What Happened”, Clinton has drawn up a list of reasons for her loss in the 2016 vote, including the alleged Russian meddling, as well as former FBI Director James Comey’s letter to Congress informing that he had resumed the investigation into her mishandling of sensitive material on her private email server while she served as secretary of state.

The Trump administration has flatly denied any collusion with the Kremlin during the election campaign, with POTUS himself denouncing the allegations as a “witch hunt”. Moscow has also dismissed accusations of its interference in the 2016 vote as “baseless”, emphasising that no evidence has been provided to substantiate the claims.