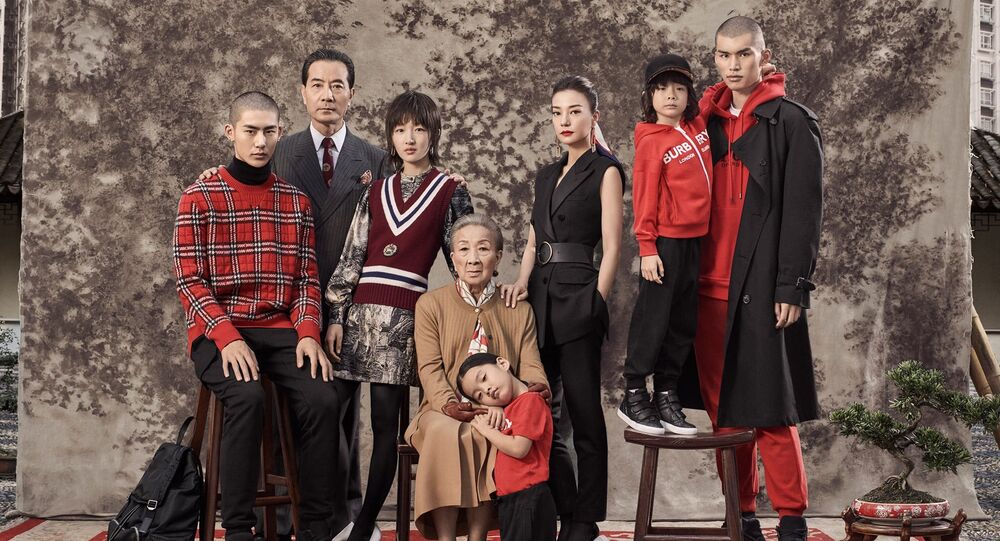 British luxury label Burberry has apparently failed to hit the spot with its new tribute to the Chinese Lunar New Year. Their promo campaign, which features Chinese models with somewhat joyless looks, sparked backlash months after another European fashion brand, D&G, appeared at the centre of a scandal following its founder's pejorative remarks.

British luxury brand Burberry has become yet another Western label to cause outrage among Chinese consumers following a promo campaign celebrating the upcoming Chinese New Year.

Burberry touted the campaign as a "portrait of togetherness, gathering the cross generations of family for a seasonal celebration". It features a series of promotional "family photos" and stars popular Chinese actresses Zhao Wei and Zhou Dongyu, who were recently named brand ambassadors.

A portrait of togetherness, gathering the cross generations of family for a seasonal celebration. Starring #ZhaoWei and #ZhouDongyu; directed and photographed by @EthJGreen
https://t.co/Ax1e8koilD pic.twitter.com/33rK1SuHcw

The ad, which apparently aimed to boost the brand's popularity and sales in China, instead stirred controversy on social media — what raised the eyebrows of commenters was not the clothes but their deadpan facial expressions.

A user on Weibo, China's biggest social media platform, branded Burberry models "a group of people who want to kill this ultra-rich grandma and keenly fight over her inheritance", according to Jing Daily, a digital publication on Chinese fashion.

Others described the photos as "creepy" and having a funeral feel. "First Balenciaga, then Dolce & Gabbana, and now Burberry? Chinese New Year is a time for family reunions, joy and luck. These people look like actors in a horror movie," wrote a Weibo user, as quoted by Channel News Asia.

This is not the first time Chinese customers have criticised a European fashion house. Italian brand Dolce & Gabbana faced a boycott in China after its co-founder, Stefano Gabbana, called it a "country of sh*t" and "ignorant dirty smelling mafia". His comments came after D&G's promotional clip with an Asian model eating traditionally Italian pizza and spaghetti with chopsticks was deemed disrespectful by some commenters.

Domenico Dolce and Stefano Gabbana subsequently issued a joint apology, asking for forgiveness and vowing to "respect the Chinese culture in every possible way".