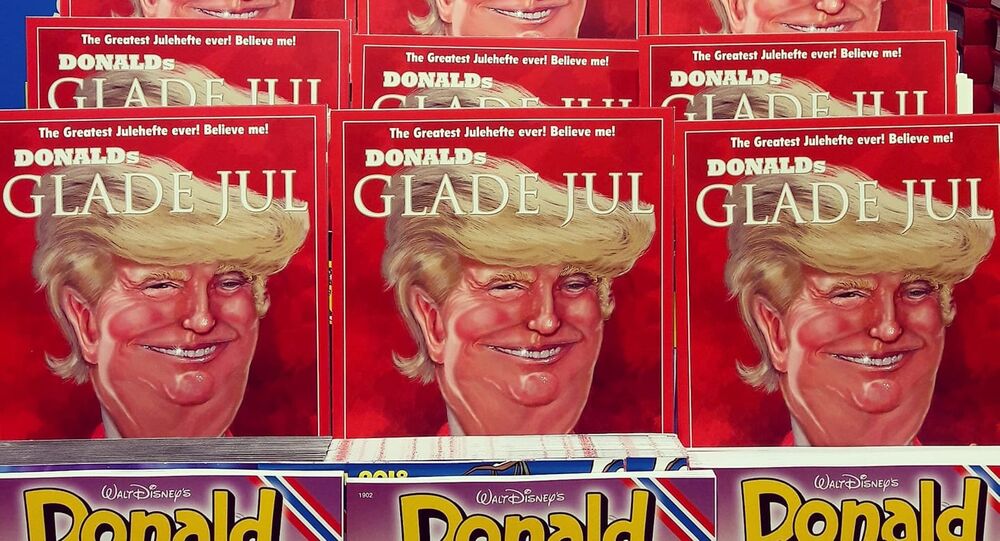 With the public interest in Donald Duck, the perennial protagonist of Norwegian Christmas cartoons, slowly fading, the US president has stepped into a new role. According to the authors, Trump was dedicated a comic book of his own for "making politics funny again".

"Donald's merry Christmas", a new comic book released by publishing firm Egmont, expands the Norwegian tradition of Christmas cartoons, while poking fun at the US president's ways and mannerisms.

Its front page is billed as "The Greatest Christmas Comic Series Ever" while it also strives to "Make Christmas Great Again", a parody of Trump's election motto.

"This is something new within the branch, we've never had an American president like Donald", Egmont editor Kjetil Johnsen told national broadcaster NRK. "The situation within American politics, and the president's role in particular, really invites satire. We just couldn't resist the temptation".

The book is complete with fictional ads that portray Trump as a marzipan pig that's for sale and will allegedly "make Christmas taste good again". Furthermore, an illustration of Trump on skis by artist Henrik Rehr is accompanied by a sham tweet imitating Trump's Twitter style: "Horrible Henrik Rehr couldn't paint his way out of a paper bag. He and his orange crayons need to be LOCKED UP! Shame!"

Egmont's publishers went to the minutest details to parody Trump's catchwords, with credits saying "Egmont Kids Fake Media" and listing a fake editor, fake graphic designer and fake editor-in-chief. The comic also includes a message of gratitude to all Americans who voted for Donald Trump: "Without you this Christmas comic would not have become a reality."

In one cartoon strip, Trump regularly calls his wife Melania by the wrong name and is invited to speak to children at "Ivanka Trump Orphanage", where only one child shows up, as all the others have either "starved or run away", according to the website Views and News from Norway. Melania is pictured wearing jackets with various messages, a jab at her $39 Zara jacket with inscription "I really don't care about it" that she wore to a child detention centre this summer, provoking a stir in the media.

In another strip, Trump tells children at an orphanage that they can forget their dead parents and the trauma of life on the streets, because "the world's best Santa Claus" (apparently, himself) had arrived.

In yet another strip, Trump boasts "a gift from Uncle Bibi" (Israeli Prime Minister Benjamin Netanyahu), a model of a new Trump Tower "with a golf course that will cover the entire Gaza Strip".

"Donald's merry Christmas" was named among this year's most interesting Christmas comics by newspaper Dagsavisen and generated positive feedback on social media, where users found it "charming", "fantastic" and "hysterically funny".

With 6,200 employees and activities in 30 countries, Egmont is one of the largest media groups in Scandinavia.

According to the economic daily Dagens Næringsliv, sales of Christmas comics have risen by around 10 percent in recent years, with a total circulation of 2.3 million, an impressive feat for a country with a total population of just over 5 million. "Donald's merry Christmas" is but one of Egmont's 35 Christmas comic books this year.

Meanwhile, sales of traditional comic books featuring Donald Duck and his friends, which have been hugely popular in the post-war period, are in decline, having dwindled tenfold since the 1980s. Comic festival organiser Arild Wærness said that Donald Duck's Norwegian edition recently celebrated its 70th birthday, but may not see its 80th. "It's only a matter of time before Donald Duck disappears", he told Dagens Næringsliv.

Whether Donald Trump will take over, remains to be seen.