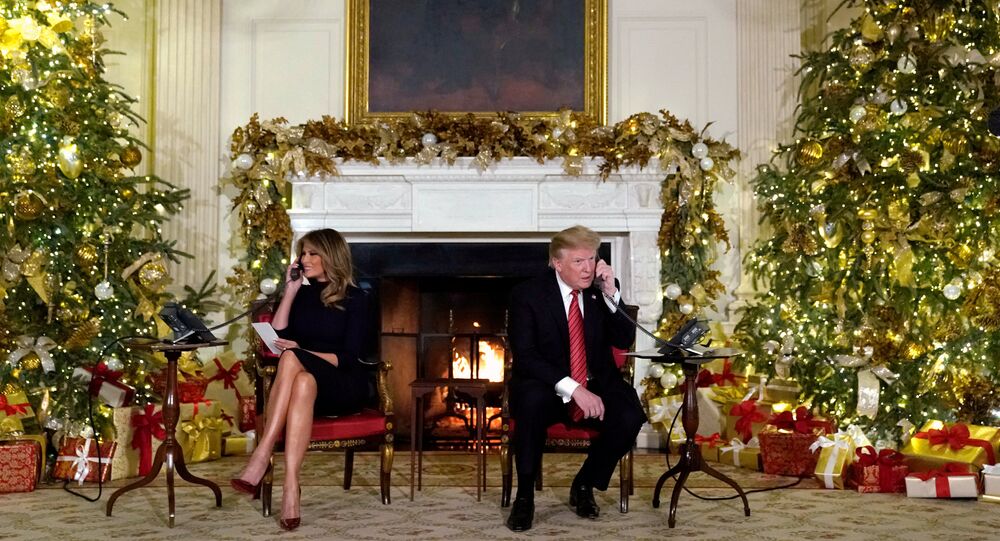 While many social media users weren’t amused with the way Trump spoke to Collman, the girl’s parents insisted that they have "no issue" with the president’s conduct.

Donald Trump expressed disbelief that a 7-year old girl from South Carolina, named Collman Lloyd, still thought Santa Claus is real, as the president conversed with her on the phone on Christmas Eve.

The conversation took place when Trump and his wife, Melania, were taking calls from American children who were trying to reach NORAD, which, as per tradition, officially tracks Santa’s movements around the world on Christmas.

© AP Photo / Carolyn Kaster
'Gift Happens': RT Reveals 'Russia's Meddling' in White House Christmas (VIDEO)
During their chat, Collman mentioned that she intends to leave some cookies out for Santa, prompting the president to ask if she is "a believer in Santa", which she confirmed.

"Cause at seven, it's marginal, right?" Trump inquired, and when the girl replied to him "Yes, sir", he told her to "just enjoy" herself.

As the exchange went viral, a number of Twitter users were quick to criticise Trump for his conduct during this conversation.

Glad to hear that. We are sorry there’s a Grinch in the White House. Merry Christmas!

Trump asked a 7 year old little girl WHO HAD CALLED A TELEPHONE NUMBER TO CHECK ON SANTA whether she believed in Santa.

THEN he asked, further emphasizing non-belief, “Because at 7, it’s marginal, right?”

Trump is a sadist.

He made a mess out of Christmas now too. Next? 🙄

Collman’s parents, however, said they have no issue with the way the US president talked to their daughter, with her father, Donald J. Lloyd, claiming that he would’ve used similar language in such a conversation.

"I think it’s crazy it became a big deal. It’s Christmastime. I’d love to keep politics out of Christmas. It didn’t bother me — I like to talk to my kids like adults," he told BuzzFeed.

A Sad Christmas Message: Homelessness in America is Growing. But Why?