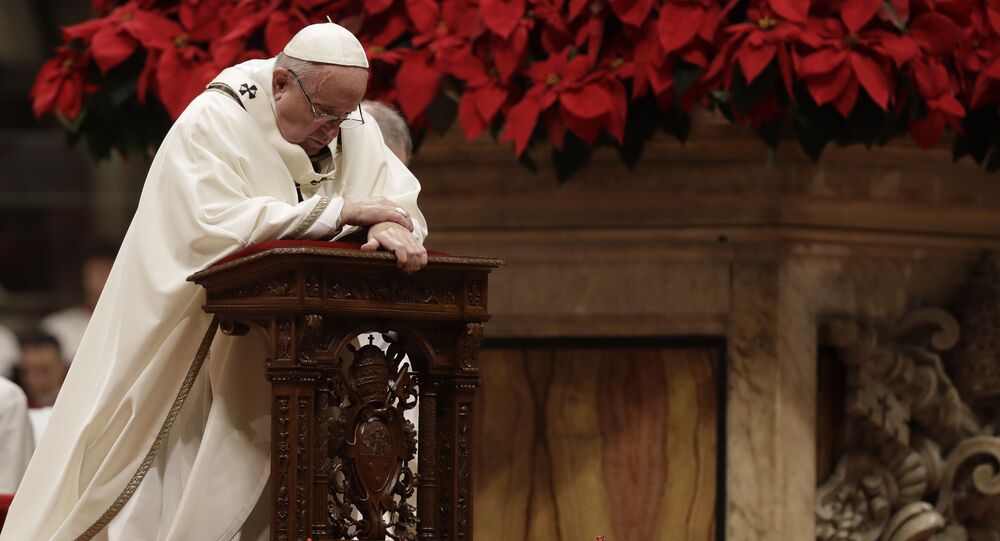 In reminding the faithful that their messiah was born into poverty and apparently stayed there his entire short life, Pope Francis I called for a focus on charity and compassion instead of what he referred to as the “insatiable greed” of global “consumerism.”

"An insatiable greed marks all human history, even today, when, paradoxically, a few dine luxuriantly while all too many go without the daily bread needed to survive," he declared, cited by France24.com.

"Standing before the manger, we understand that the food of life is not material riches but love, not gluttony but charity, not ostentation but simplicity," the Pope — spiritual leader of the second wealthiest religion on Earth — told worshipers in the Vatican.

The 82-year-old Pontiff urged Catholics around the world to avoid a "slide into worldliness and consumerism," instead asking of themselves, "Do I break my bread with those who have none?"

The Pope also noted growing nationalistic tendencies in the West as immigrants fleeing conflict in northern Africa and the Middle East strain richer societies. "Our differences are are not a detriment or a danger, they are a source of richness," he suggested.

Facing increasing pressure over the past year for long-running scandals involving widespread child abuse, as well as other sex scandals, threatening senior figures in the church hierarchy, Francis stated again that that he would support a deep culling of the ranks to get to the Church's child predators.

"To those who abuse minors I would say this: convert and hand yourself over to human justice, and prepare for divine justice," he warned while addressing high-ranking Vatican officials.