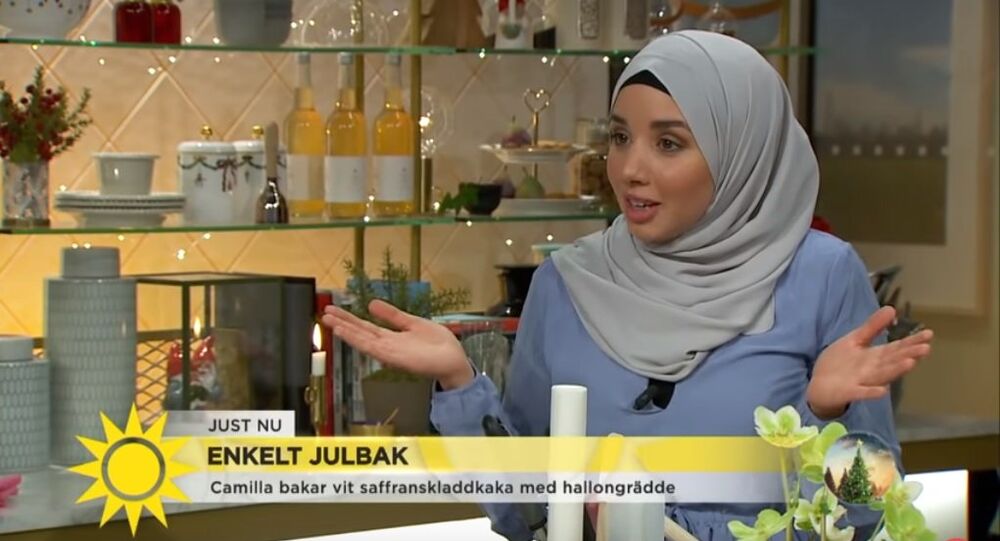 Having celebrated the Midsummer holiday with "traditional" kebab cooked by a veiled Muslim food blogger earlier this year, Swedish national broadcaster SVT has taken another step toward diversity by inviting a Muslim guest to celebrate Christmas.

"Of course, you don't celebrate Christmas, because you are a Muslim", program leader Anders Pihlblad told his guest Camilla Hamid.

"No", Hamid replied, pointing out that she nevertheless appreciates the Christmastide atmosphere. "One can choose what one can relate to, what one likes. I love everything that has to do with Christmas baking", Hamid declared.

The host went on to celebrate multiculturalism and admitted that he likes it when different cultures "borrow from each other". When Pihlblad inquired whether his guest's Muslim family had taken on any Christian traditions, Camilla Hamid called the mutual borrowing "lovely" and replied that "snacks" and "lights" were particularly cosy.

Some viewers took to social media to vent their displeasure at SVT's policy.

"If you watch TV4's morning news, you have yourself to blame, it is completely useless", one user wrote on Facebook.

Some went even so far as to suggest that SVT was "spitting on the Christian tradition".

Others expressed their discontent with the recent decision by the Swedish parliament to replace the TV license with a mandatory tax constituting 1 percent of one's income, regardless of whether you own a TV or not.

In 2016, Camilla Hamid won the Swedish food blog award for the best baking and dessert blog. By her own admission, she has been baking "as long as she can remember". She is the author of My Kitchen Stories blog.

Sveriges Television, or SVT, is the Swedish national public television broadcaster, funded by a public service tax on personal income and largely modelled after BBC.

This past Midsummer, a traditional Scandinavian holiday, SVT got into a pickle by airing a similarly-minded diversity-themed piece with yet another Muslim cook preparing "traditional" kebab.